Tesla doesn't want to deal with press at all; Musk sets dangerous precedent

Tesla has set a dangerous precedent by dissolving its global PR team, leaving journalists with no way of contacting the world's most valuable automobile brand except for tweeting to Elon Musk or sending a DM to Tesla Twitter.

In a surprising, shocking, and unprecedented move by Tesla, the electric car maker dissolved its PR department as it sent out a message that it simply doesn't want to deal with journalists and their queries anymore. The press is left with no point of contact at the world's most valuable car brand and this could go bad in many ways. Does Elon Musk care? Well, he will probably tweet about it.

If you've noticed Tesla coverages of late, the majority of it is sourced from Musk's Twitter feed. Searching for the term Tesla returns news articles starting with Elon Musk has revealed, Elon Musk says, Elon Musk responds to fan, and that's how some of the biggest news has been shared with the press, including Tesla coming to India soon, which as expected was revealed by Musk.

Electrek originally reported that Tesla shut down its PR team recently. To recall, IBTimes had also sent an inquiry a few months ago to the Tesla PR team about its plans for India, which went unanswered. But we didn't suspect anything as brands usually choose to remain mum on rumours. But months later, Musk saw it fit to make Tesla's plans for India official by tweeting about it.

Electrek, however, had been sitting on this information for a while now and only recently got it confirmed that Tesla no longer has a PR team, according to someone at the highest level at the company. Every member of the Tesla PR team has either been moved to a different role within the firm or left the company altogether.

"Tesla receives more press than any other automaker and the team always seemed understaffed," Electrek reported. "It literally was one-tenth of the size of a PR team for an automaker of Tesla's size and probably 20 times smaller than the PR teams at most major automakers."

But the team supposedly managed to stay on top of things, correcting misinformation, and adding pointers to global coverage over the years "all while working under the pressure of a boss who infamously often becomes enraged by bad coverage." Not anymore.

"If true, this action sets an extraordinarily dangerous precedent for blocking the continued free flow of information from one of the world's most innovative and influential companies, as well as impacting the media's ability to responsibly cover an organization's activities," the Public Relations Society of America said in response to the news. 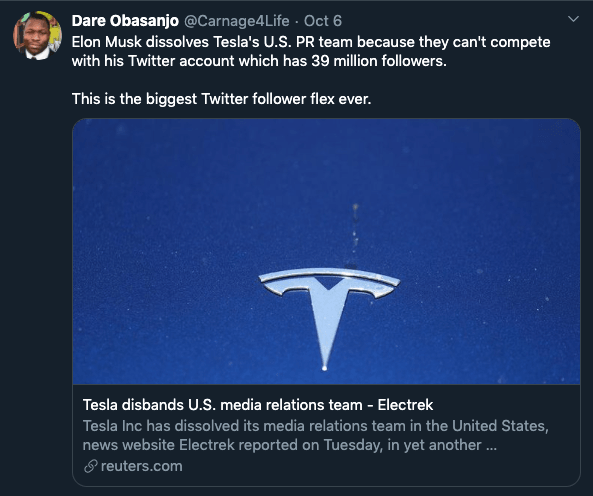 There was no press release about dissolving the PR team, obviously, and the reason behind it remained unknown, but not a total mystery. If anyone has to guess, Elon Musk and Tesla's Twitter handle command a whopping 45 million-plus follower-base. Looks like Tesla and Musk would want to deal with fans and followers directly on the platform, which may seem logical to an extent but it allows the brand to be selective on whom to respond - if at all it chooses to.

But the sheer volume of press queries makes it impossible for Tesla or even its billionaire boss to respond to all - or even the logical ones, which needs to be communicated to the world and give a balanced two-sided press.

By ignoring the press, Tesla is by extension refusing to pass down crucial information to public and customers. So yes, we did drop in an email to APACPress@tesla.com and if anyone chooses to respond to probably our last email seeking a response, we'll update this copy. Until then, IBTimes India has decided to ban Tesla coverage on our publication, in the interest of transparency and in support of the public relations fraternity.

Close
Virat asks pregnant Anushka from field if she has eaten,Video goes viral
Why advertise with us?
most popular