Royal Challengers Bangalore (RCB) pulled off an excellent bowling performance to defeat Mumbai Indians by 14 runs in an Indian Premier League (IPL) clash at the M. Chinnaswamy Stadium here on Tuesday. Chasing a managable target of 168 runs, Mumbai lost wickets at regular intervals and could only post 153/7 in their 20 overs. Except for Hardik Pandya, who scored a patient 50 off 42 deliveries, the rest of the Mumbai batsmen were unable to stand up to the RCB bowlers. RCB are now at the fifth spot in the IPL table with six points from their eight matches. Mumbai are second from bottom in the eight-team ladder with four points from eight matches. Credit: IANS
2 of 6

Mumbai's chase ran into trouble right from the start as they lost their entire top order in the first seven overs before the total had reached the 50-run mark. Kiwi pacer Tim Southee struck the first blow when he bowled Ishan Kishan in the first over. Fellow pacer Umesh Yadav struck in the fourth over when he sent back the other opener Suryakumar Yadav and Mumbai Indians skipper Rohit Sharma off successive deliveries in the fourth over. The dangerous duo of Kieron Pollard and Jean-Paul Duminy seemed to have stemmed the rot for a brief period when they put together 26 runs in the span of four overs. Credit: IANS
Advertisement1
3 of 6 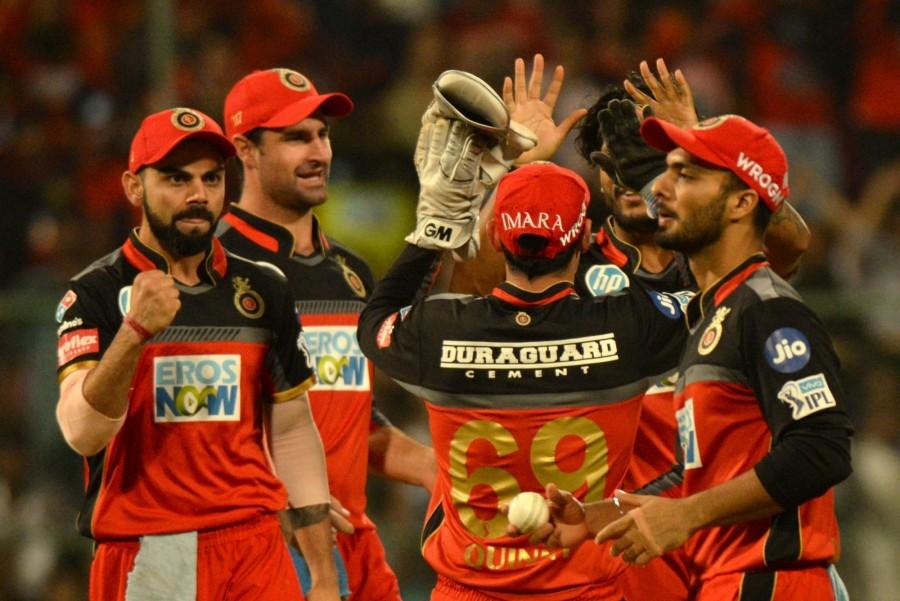 Pacer Mohammed Siraj separated the duo when Pollard edged one to Quinton de Kock. When Duminy was run out in the 12th over, Mumbai were in trouble at 84/5. The two Pandya brothers - Hardik and Krunal - however gave a tough fight to the RCB bowlers with a 56-run stand off 39 balls. But when Krunal miscued an attempted reverse scoop off Siraj to hand an easy catch to Mandeep Singh at backward point, it was as good as game over for Mumbai. The RCB pace trio of Southee, Siraj and Umesh claimed two wickets each. Earlier, a disciplined bowling effort by Mumbai restricted RCB to a moderate 167/7. Credit: IANS
4 of 6 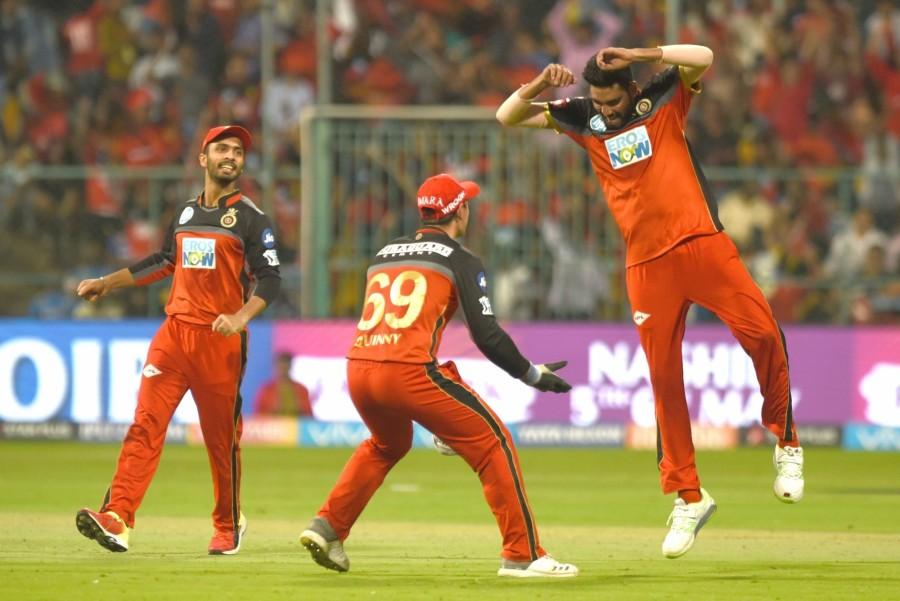 The Mumbai bowlers pulled out all stops to keep the star-studded Bangalore batting line-up at a manageable total. Put into bat, Bangalore started on a cautious note as openers Manan Vohra and de Kock added 38 runs for the opening wicket in five overs. Pacer Mitchell McClenaghan drew the first blood for Mumbai as he dismissed de Kock (7) in the fifth over. With the addition of another 23 runs in Bangalore's scorecard, an in-form Vohra (45 off 31) was trapped leg before off a Mayank Markande delivery in the ninth over. Incoming batter and skipper Virat Kohli (32 off 26) then joined Brendon McCullum and the duo showed some resistance forging a 60-run partnership to take Bangalore past the 100-run mark. Credit: IANS
5 of 6 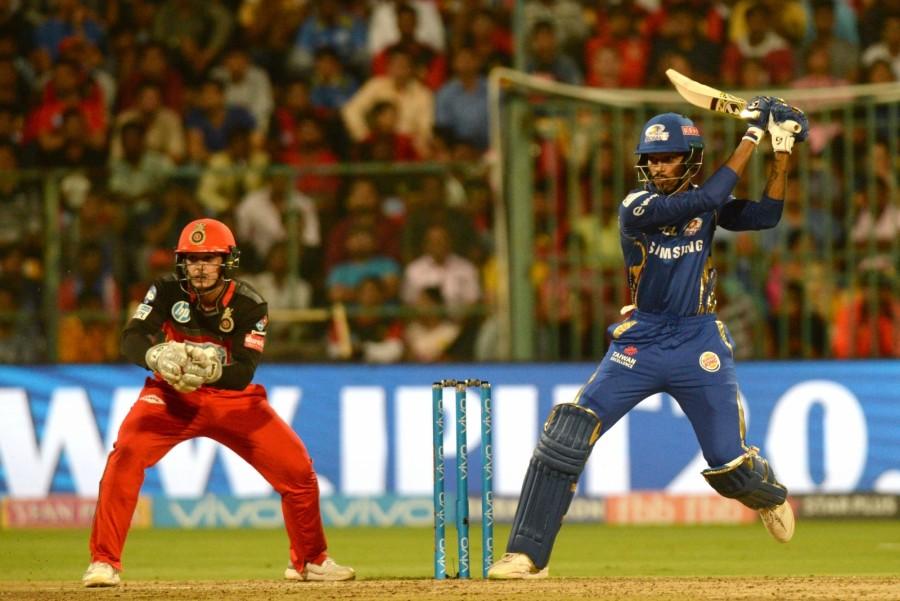 McCullum ran himself out while trying to take a single with the Bangalore scorecard reading 121/3. Kohli then tried to take Bangalore forward with Mandeep Singh (14 off 10) however, medium-pacer Hardik Pandya's double blow in the 17th over put the hosts on the back-foot. He sent both the batters back to the dug out on successive deliveries to send Bangalore reeling at 139/5. A 10-ball 23 by Colin de Grandhomme in the final moments, however, helped the hosts reach a fighting total despite Washington Sundar (1) and Tim Southee (1) failing to fire. For Mumbai, Hardik Pandya was the pick of the bowlers with figures of 3/28 while Markande, McClenaghan and Jasprit Bumrah bagged a wicket each. Credit: IANS
6 of 6 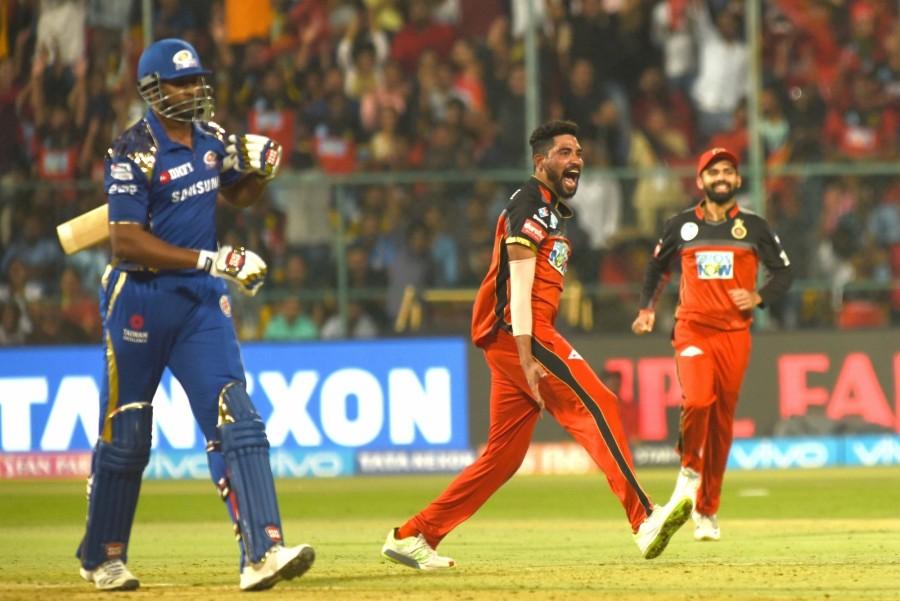