Put in to bat, Shikhar Dhawan (72) hammered the South African bowlers all around the park and helped India to post a massive 203/5 before pacer Bhuvneshwar Kumar (5/24) wreaked havoc in the South African batting line-up to take a crucial 1-0 lead in the three-match series. With this bowling stats, Bhuvneshwar also became the first Indian bowler to take five wickets in each of the three formats (four times in Tests and once each in One Day Internationals and T20Is).
2 of 5

Chasing a challenging target, South African openers J.J.Smuts (14) and Reeza Hendricks got off to a good start. But in the third over, pacer Bhuvneshwar Kumar dismissed Smuts to make it 29/1. Middle-order batsmen Jean-Paul Duminy (3) and David Miller (9) were also dismissed cheaply by Bhuvneshwar and Hardik Pandya respectively. With the scoreboard reading 48/3, Farhaan Behardien (39) came in the middle and played sensibly along with Hendricks.
Advertisement1
3 of 5 The two displayed quality shots and forged an 81-run partnership for the fourth wicket. But just when things seemed good Behardien was sent back to the pavilion by leg-spinner Yuzvendra Chahal in the 15th over. After adding a few more runs with new batsmen Heinrich Klaasen (16), Hendricks (70) was caught behind off Bhuvneshwar in the 18th over. Now with 46 needed in 14 balls, lower-order batsmen Andile Phehlukwayo (13), Chris Morris (0), Dane Paterson (1) and Junior Dala (2 not out) failed to rise to the occasion and only managed to score 175/9 in 20 overs.
4 of 5 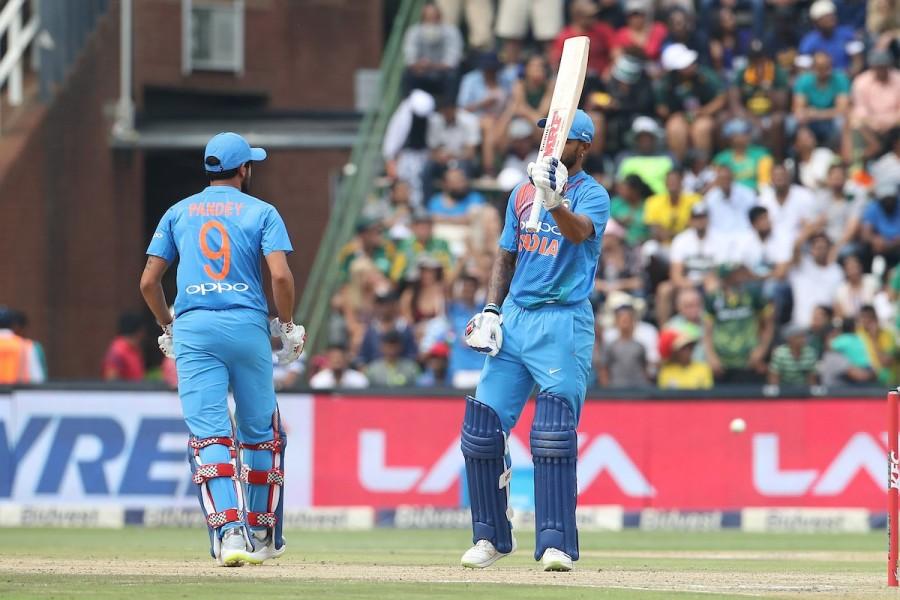 Earlier, opening batsman Shikhar Dhawan once again unleashed mayhem in South Africa, with his 72 powering India to 203 for five wickets. The Delhi left-hander, who hit 323 runs in the six One-Day Internationals (ODIs), blasted 10 fours and two sixes in his 39-ball innings as others batted around him. After home captain Jean-Paul Duminy put India into bat, India's innings was lifted by a brisk 21 off nine from Rohit Sharma, who got out in the fifth delivery of the second over after edging to wicket-keeper Heinrich Klassen off debutant Junior Dala.
5 of 5 Dhawan's show began after this as he got useful support from Suresh Raina (15 off 7) and Virat Kohli (26 off 20). Till the dismissal of Kohli, who was ruled LBW against spinner Tabraiz Shamsi in the third delivery of the 10th over, India had already scored 108. Dhawan made the most of the ill-disciplined bowling from Chris Morris, Dala and Andile Phehlukwayo, who were allowing the 32-year-old to free his arms on the leg side. A failed scoop attempt of a slower delivery from Phehlukwayo ended Dhawan's innings as Klassen dived front to removed the danger.
Advertisement
Related Articles