Amid mounting tensions, should India use trade as a weapon against China?REUTERS/Adnan Abidi/File Photo

The tension between two of the world's largest countries in terms of population is mostly centered around a disputed region in the mountains that separate them - the mighty Himalayas. India and China have been caught in a tug-of-war over the northernmost part of Kashmir towards the neighbouring country's border. Albeit inhospitable, the strategical importance of the region has resulted in it becoming increasingly militarised.

As a result, this part of the world is more likely to end up being an environmental catastrophe than a military or even nuclear disaster, reports the Quartz.

The region in northern Kashmir has been hotly contested since the mid-20 century, notes the report. Since about the 1950s, soon after India and China became republics, they began to compete over who gets the higher ground. This led to a war in 1962 and since then, both countries have been engaging in unresolved conflicts.

A mountainous source of livelihood

While the natural ecosystem of the Himalayas sustains itself, snow-fed rivers from the mountains flow far and wide through both countries, serving as a lifeline for a large population in the South, Southeast and East Asia. The high altitude terrain prevents expansive industrial or urban development.

The Himalayas, known to have the world's third-largest deposits of ice and now, are already facing global warming and climate change-related threats. Now, the Indo-China struggles are only making it worse.

Any form of industrial or infrastructural "development" in these mountains threaten the biodiversity that shelters some of the most exotic flora and fauna in the world. Since the 1962 war, both countries have undertaken major constructions including roads, barracks, airports, military bases, and hospitals.

Activities like this have caused deforestation in the mountains, which, in turn, has caused massive landslides. Studies show that the movement of troops on glaciers has also led to a glacial retreat in the Himalayas.

Local tribal and ethnic communities have been displaced to make way for intensive farming. Animals in the region have started to clash with each other and to add to it all, agricultural intensification has led to the real risk of toxic pollutants and resistant superbugs seeping into the watershed.

The imbalance in the mountains' ecosystem, believed to have been affected by the developmental efforts made by both countries, has led to devastating floods, affecting the lives of lakhs. 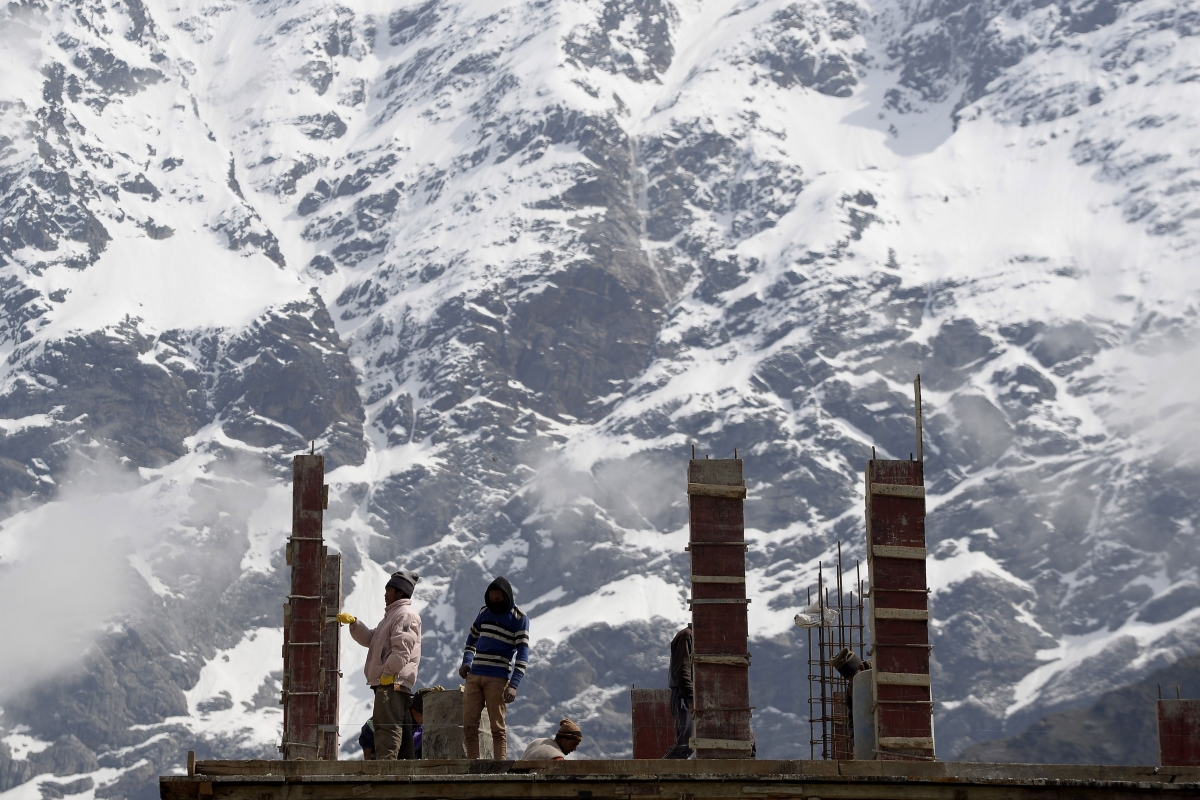 Indian labourers work on a construction site with a view of the Himalayas in an area that was hit during the deadly 2013 North India floods in Rudraprayag District in northern Uttarakhand state. [Representational Image]SHAMMI MEHRA/AFP/Getty Images

India has been busy building dams that are not found to be profitable, notes the report. Between 2000 and 2016, the country has approved over 150 dams in the Himalayas. Only one has been built so far and the rest have simply stalled.

Meanwhile, in 2017, China constructed a road into the Doklam region, an area that belongs to Bhutan and is protected by India. So currently, tensions are high.

Adding fuel to it, China has opened a new mine in Lhunze, at the Chinese border close to Arunachal Pradesh, in Northeast India. The mine is reportedly worth over $60 bn in gold, silver, and a host of other precious metals.

Lunzhe is positioned close to Brahmaputra river's headwaters, notes the report. The precarious location of this mine is quite dangerous owing to its proximity to the river's source. The Brahmaputra originates in China, but the majority of its catchment area is in India's Arunachal Pradesh, which China claims as its own.

Hua Yu Mining, the company that owns the Lunzhe mine is allowed to operate in that region only if they adhere to strict environmental guidelines, notes the report. But the fact also remains that mines are difficult to control, and are more than likely to leak acids and even arsenic into the ground, which will seep into the Brahmaputra.

All of these rising tensions indicate a possible war between the two countries, notes the report. Both countries are nuclear powers which only adds to the concern. Having said that, the more realistic threat and causes for concern seem to be an environmental one.

The above story is based on a report published by Quartz.

Over 22K techies lose jobs in US; more than 12K in Indian startups [details]

PM lauds Murmu's candidature; says it stands over and above any politics [details]