Sujeeth of Prabhas' Saaho fame has married Pravallika in a low-key event. They had their engagement ceremony in June
4 hours ago

Bollywood actress Sara Ali Khan spent her Sunday doing yoga by a swimming pool. Sara took to Instagram, where she shared a picture of herself dressed in a bright orange sports bra and shorts.
22 hours ago

Music director Devi Sri Prasad is celebrating his 41st birthday today. Mahesh Babu, Allu Arjun, Arya and a host of other Telugu celebs have showered wishes upon DSP and rare and unseen pictures.
1 day ago

Varun Tej is busy prepping for his role as a boxer in the Kiran Korrapati-directed movie. Olympic Gold Medallist Tony Jeffries has trained him in boxing, before Neeraj Goyat took over the training in Mumbai.
1 day ago

After Power Star, Ram Gopal Varma set to target Allu Aravind with the movie Allu, which will have Chiranjeevi, Pawan Kalyan, Allu Arjun, Allu Sirish, Ram Charan and Naga Babu as its lead characters.
1 day ago

Telugu actress Rashmi Gautam landed in a problem after she demanded ban animal sacrifice on Bakrid. The actress is facing the wrath of Muslims, who said that she is targeting their religion.
1 day ago

Women's cricket should have come under BCCI earlier, feels Mithali

India's star woman cricketer Mithali Raj spoke up about the perception towards women's cricket in the country. She also revealed that she feels women's cricket should have come much sooner under the BCCI belt.
1 day ago

On July 4, Rao had announced on social media that he had tested Covid-19 positive. A week ago, he was shifted to a private hospital in Vijayawada. For the past few days, he was on ventilator support.
1 day ago

Satyadev and the team of Uma Maheswara Ugra Roopasya (UMUR), which started streaming on Netflix from July 30, have come under attack for glorifying Junior NTR and mocking Mahesh Babu in the movie.
3 days ago

Uma Maheswara Ugra Roopasya review: This is what critics and audience have to say about Satya Dev's UMUR

Director Venkatesh Maha's Telugu movie Uma Maheswara Ugra Roopasya (UMUR) is a comedy-drama film starring Satyadev and Suhas. It has got positive review and ratings from the critics and audience.
3 days ago

Rana, Nani, Krish and other celebs heap praises upon Satyadev, Suhas for their acting in UMUR

Stylish star Allu Arjun has finally made an official announcement about his much-rumoured new project with director Koratala Siva on the 16th death anniversary of his grandfather Allu Ramalingaiah.
3 days ago

The album is inspired by Queen B's music for The Lion King: The Gift. And Beyonce had announced the release of a visual album with a one minute trailer in June 2020.
3 days ago

Jeevitha Rajasekhar, the wife of actor Dr Rajasekhar, is set to make her comeback on the small screen. The Tollywood actress would replace Roja Selvamani in Zee Telugu's Bathuku Jataka Bandi.
3 days ago
1 2 3 4 5 6 7 8 9 10 Next 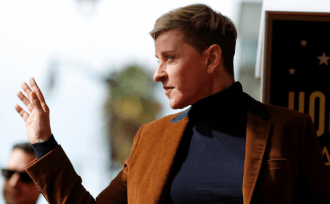 Is Ellen DeGeneres Show going off-air amid allegations of racism, workplace harassment
2 hours ago
MOST POPULAR