Explained: How did RBI arrive at Rs 57,128cr dividend declaration for FY21

Earlier in the day today, RBI approved a dividend of Rs 57,128 cr for FY21 and decided to maintain 5.5 percent as contingency risk reserve or retained earnings. Let's interpret the RBI numbers and calculations here.
8 hours ago

In Telangana a family of four was found dead at their residence, however their deaths have left everybody suspicious.
11 hours ago

Actress Kubbra Sait jokes she has lost her virginity to the Covid-19 test, adding that it was not as bad as she imagined.
11 hours ago

Russian Covid vaccine Sputnik is useless; WHO says 9 others on right track

Sushant sings Krishna bhajan in a video that has emerged online

A video that has late actor Sushant Singh Rajput singing a Krishna bhajan has surfaced online only now, two months after his death, although it was reportedly made in January this year.
11 hours ago

A man accused of raping a 6-year-old girl in western Uttar Pradesh's Hapur was shot in the leg after he grabbed a cop's gun and tried to flee on Friday, the police have said. Dalpat was arrested earlier in the day more than week after the girl was kidnapped and raped.
12 hours ago

If the latest report is to be believed, Parth Samthaan and Erica Fernandes are reportedly quitting the show for better prospects.
12 hours ago

Not SDPI, but drunkard planted flag on Adi Shankaracharya statue in Sringeri

A drunkard planted SDPI's flag atop the statue of Adi Shankaracharya statue in Sringeri sparked a huge row in the district in Karnataka. As SDPI was falsely accused, the CCTV footage revealed that it in fact was a drunk man who had committed the act.
13 hours ago

Indian Home Minister Amit Shah who recently tested positive for COVID-19 has now tested negative and took to Twitter to make the announcement.
13 hours ago

Singer SP Balasubrahmanyam's health condition is said to be critical. He was admitted to a private hospital in Chennai after testing positive for coronavirus.
13 hours ago

The Reserve Bank of India (RBI) has approved the transfer of Rs 57,128 crore surplus reserves to the government accounting for the year 2019-20. The RBI board has decided to maintain the Contingency Risk Buffer at 5.5%.
14 hours ago

An old, unrelated clip has gone viral on social media with the claim that Mumbai's Bandra-Worli Sea Link was engulfed by high tides amid recent heavy rains in the city.
15 hours ago

Here is a compilation of Bollywood patriotic songs to celebrate India's 74th the Independence Day.
16 hours ago

A case was filed on Thursday against a woman for allegedly impersonating as a police officer and issuing challans to those not wearing a mask in Delhi's Tilak Nagar area.
16 hours ago
1 2 3 4 5 6 7 8 9 10 Next 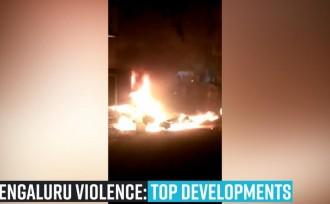