Dr Deborah Birx is in political cross hair for spreading misinformation on coronavirus pandemic in the US. She is being criticised for giving "only good" information about coronavirus to President Donald Trump.
21 hours ago

Last week, the U.S. Justice Department made public an indictment of two Chinese nationals accused of spying on the United States, including three unnamed U.S.-based targets involved in medical research to fight the COVID-19 pandemic.
3 days ago

Mystery seeds from China in American mailboxes; do not plant say authorities

American citizens are curiously receiving seeds from China in their mailboxes, authorities have told citizens not to plant them in case they've received them. China Post says they didn't send it.
4 days ago

Though it was Jeff Bezos' first congressional testimony, he appeared the least fazed. Cook drew fewer barbed questions than Bezos and handled them efficiently. Zuckerberg took the most damage, stumbling at times when confronted with internal emails.
4 days ago

The resolution was unanimously passed in the Senate of Pakistan with a complete consensus over what they called "relentless" struggle of Syed Ali Geelani.
5 days ago

David T. Hines, 29, of Miami, Florida was arrested and charged with fraudulently obtaining $3.9 million in Paycheck Protection Program (PPP) loans. Authorities seized a $318,000 sports car and $3.4 million from bank accounts at the time of the arrest.
6 days ago

Last month Nigerian national Ramon Abbas AKA 'Hushpuppi' was arrested in Dubai by the FBI for laundering billions of dollars. His social media was what led the FBI to him.
6 days ago

For Tom Cotton, slavery was a necessary evil; who agrees with him

Republican Senator Tom Cotton described slavery was a "necessary evil" in his attack on the New York Times' "1619 Project" that explores racism and slavery in the US.
6 days ago

Dr Anthony Fauci has been on the target list of right-wing conservatives and conspiracy theorists. Especially eversince he became the public face of the official response to the coronavirus pandemic in the US.
8 days ago

US authorities have arrested Seattle-based Mukund Mohan, a serial entrepreneur and former executive at Amazon and Microsoft, for allegedly defrauding the Paycheck Protection Programme (PPP) with forged documents and embezzling more than $5.5 million in Covid-19 relief funds.
9 days ago

R. Vaishali and GM R. Praggnanandha, the two chess masters from Chennai are preparing for the online Chess Olympiad and for them it's nothing outside the normal.
9 days ago

Pakistan Supreme Court hinted towards YouTube ban after the court objected to unregulated content on social media, particularly comments regarding the judiciary, armed forces and the government on YouTube.
10 days ago

The food supply chain depends on agriculture for smooth functioning. In this pandemic, the production and supply of food are essential.
10 days ago
1 2 3 4 5 6 7 8 9 10 Next 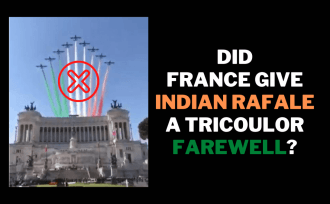 Fact Check: No, France did not give tricolour farewell to India's Rafale jets
52 minutes ago
MOST POPULAR