'India's air is filthy' remark by Trump hit a nerve? It's time to act

India might be in the midst of fighting a pandemic, the air pollution problem has not disappeared. Almost every Indian household must spend on a good air purifier, and here we answer what qualifies as a good air purifier.
1 day ago

Kanye West recently spoke with Joe Rogan on several controversial topics, including the time when he almost considered aborting his first daughter North West.
2 days ago

Eros Now apologizes after #BoycottErosNow trends after Twitter outrages over Navratri post starring Katrina Kaif, Salman Khan. Scroll down to read the whole fiasco and what led the OTT platform to pull down the demeaning Navratri memes.
5 days ago

Kim Kardashian recently talked with David Letterman on his Netflix show where she revealed that she makes more money from one Instagram post than filming one episode of KUWTK.
5 days ago

Slamming the report and the publication, Varun Dhawan tweeted: "Guys, you can write how many ever make-belief stories about me but don't makeup things about my dad. This is a completely fabricated story will see you in Christmas to make you laugh."
6 days ago

'So embarrassing': Warner caught farting on live interview, records it on mic

Even though SunRisers Hyderabad have so far not been able to play to their potential in the ongoing Indian Premier League (IPL), it has not stopped their super entertaining skipper David Warner ace with his antics and entertain fans.
9 days ago

Joaquin Phoenix who gained fame for his Oscar award winning film Joker in 2019, will be seen in the role of Napoleon Bonaparte.
11 days ago

Really enjoy batting together: Warner on partnership with Bairstow

Warner was also all praise for spinner Rashid Khan who took three wickets and conceded just 12 runs in his four overs, one of which was a maiden.
18 days ago

The 2020 Nobel Prize for physics has been awarded to Briton Roger Penrose, German Reinhard Genzel and American Andrea Ghez for discoveries relating to black holes
21 days ago

Actor Sonu Sood has joined the league of Angelina Jolie, David Beckham and Leonardo DiCaprio, as he is honoured by the United Nations Development Programme with the SDG Special Humanitarian Award.
27 days ago

"Clown", "Liar", "just shush for a minute" and "keep yapping" were the insults that will forever be the highlight of the first Trump-Biden US presidential debate 2020
27 days ago

Here's why Google Doodle pays tribute to Zohra Sehgal : Rare and unseen pictures of 'doyen of Hindi cinema', who is the illustrator behind the artistic doodle, find out
28 days ago

Disney Live Action is coming back with Peter Pan, but have you watched the other films which have taken viewers to Neverland?
Sep 26, 2020

Kannada actor Sharan has been hospitalised after he complained of stomach pain on Saturday, 26 September.
Sep 26, 2020

Oh My God, 'Friends' completes 26 years: Flashback of all special moments from the show 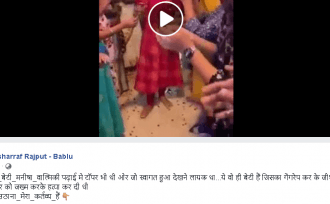 Fact-check: No, she is not an IAS officer nor is she linked to Hathras victim [viral video truth here]
1 minute ago
MOST POPULAR