From owning restaurants, clubs to gyms: Bollywood stars and their successful business ventures

Besides their acting skills, a few Bollywood actors like Shah Rukh Khan, Salman Khan, Shilpa Shetty and Suniel Shetty have smart business skills as well.
May 8, 2020

Ryan Reynolds' Deadpool in MCU would be a game-changer

Ryan Reynolds recently talked about how bringing a character like Deadpool into MCU would be 'explosive.'
May 7, 2020

Earlier in February, during the trailer launch of Sooryavanshi, Ranveer Singh arrived 40 minutes late for the promotions of his film.
May 6, 2020

Baby Yoda is back! Robert Rodriguez to direct 'The Mandalorian' season 2

The Mandalorian season 2 is finally getting started with Robert Rodriguez as director for Disney+'s Star Wars TV series.
May 5, 2020

Salman Khan is currently awaiting the release of his new movie Radhe which is being directed by Prabhu Deva
May 4, 2020

Aishwarya Rai vs Sushmita Sen: Difference between net worth of two beauty queens

Let's take a look at the difference between the net worth of Aishwarya Rai and Sushmita Sen, which is bound to astound many.
May 3, 2020

Alia Bhatt was holding a phone in her hand and trolls took no time in accusing the actress of recording a video of Rishi Kapoor's funeral.
May 1, 2020

Irrfan's wife Sutapa on actor's battle against cancer: 'The doctor's reports were like scripts which I wanted to perfect'

National award-winning actor Irrfan breathed his last on April 29. In a statement, his wife shared some of the best memories with the actor.
May 1, 2020

Celebrated annually on April 29, the International Dance Day spreads the need of encouraging the participation and education in dance through various events.
Apr 29, 2020

Akshay Kumar was the first Bollywood celebrity to donate to Prime Minister Narendra Modi's PM-CARES fund to support the government's battle against the COVID-19 pandemic.
Apr 28, 2020

Netflix's Extraction is one of the most talked-about action-thriller movies and now many are talking about a possible sequel featuring Avengers: Endgame movie star.
Apr 27, 2020

'Extraction' actor Priyanshu Painyuli: 'Told director to give me one scene where I'm shooting Chris Hemsworth'

Marvel fan Priyanshu Painyuli was more than excited to be a part of a Russo brothers project. Unfortunately, he never shared screen space with Chris Hemsworth.
Apr 24, 2020

When Sushmita Sen wanted to back out after learning about Aishwarya Rai's participation in Miss India.
Apr 24, 2020

Friday Trivia: Did you Know Urvashi Rautela was dethroned as Miss Universe? [Throwback]

Did you know Bollywood actress Urvashi Rautela, who often describes herself as the 'youngest Indian actress to have won the maximum number of beauty titles in entire pageant history ever was out of the Miss Universe 2015 pageant?
Apr 24, 2020
Prev 4 5 6 7 8 9 10 11 12 13 Next 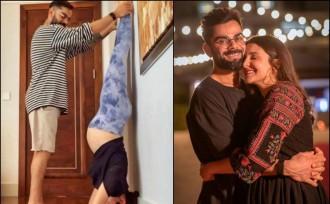 Anushka Sharma gives fitness goal, aces headstand with baby bump; shares how she did it
37 minutes ago
MOST POPULAR