Black Panther movie star Chadwick Boseman died on August 28 at the age of 42 after a four-year battle with colon cancer. On his 44th birthday, his friends paid heartfelt tributes
5 days ago

David Prowse, known for playing the physique of Darth Vader in the Star Wars original trilogy, has sadly passed away at the age of 85.
5 days ago

More than the war of good or great shows, it was a war of the iconic and favourite characters. See if you can decide which cartoon channel makes the cut after reading this article.
11 days ago

Chris Pratt asks Chris Hemsworth to give a break to his work out and has a very good reason for it. Read on to know more.
11 days ago

Scarlett Johansson and Mark Ruffalo share something more than a birthday. Here's a look at the friendship shared by Natasha Romanoff and Bruce Banner aka Black Widow and Hulk.
12 days ago

Happy Birthday Sushmita Sen: Journey of the actor that made her the ultimate queen of hearts

From being crowned as Miss Universe to being a philanthropist, a fitness enthusiast to a doting mother to two daughters. Scroll down to witness actor Sushmita Sen's journey on her birthday.
15 days ago

Breaking: Wonder Woman 1984 to release on HBO Max and theaters

A video of Money Heist actor Itziar Ituño singing Biwi No 1 song Chunari Chunari is breaking the internet. Actor Sushmita Sen, who was the lead actress in the movie has also reacted.
17 days ago

If you think Chess is a boring game then you have not watched Netflix's The Queen's Gambit miniseries. Anya Taylor-Joy's series has sparked interest in chess worldwide.
17 days ago

Robert Downey Jr.'s Tony Stark could be in future MCU movies, but here's a catch

Actor Suriya Sivakumar who was going through a tough phase in his career has made a comeback with latest his film 'Soorari Pootru' helmed by Sudha Kongara. Let's take a look at some of his most iconic roles over the years.
22 days ago

As the Juhi Chawla turns 53 today, let's take a look at the some of her fascinating facts that make her nation's sweetheart. The timeless and charmless beauty still skips our heartbeat with her infectious smile.
22 days ago

Johnny Depp's former wife Amber Heard has responded to rumors suggesting she is being replaced in DCEU. Amber has stated she is very excited to return as Mera in Jason Momoa's Aquaman 2
22 days ago

Indebted, starved and no work: Jason Momoa's talks about hardships after Game of Thrones

Aquaman 2 movie star Jason Momoa recently revealed that he had no work, and his family was starving after his character was killed off from HBO's Game of Thrones show.
23 days ago
1 2 3 4 5 6 7 8 9 10 Next 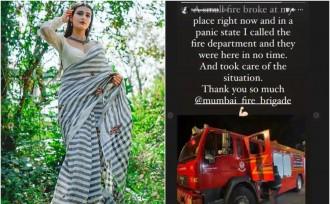 Fire breaks out at Fatima Sana Shaikh's home in Mumbai; fire brigade rushed to rescue
19 minutes ago
MOST POPULAR