Based on recommendations from the Technical Advisory Committee (TAC), the Karnataka government is considering night curfew in the state during New Year's Eve week.
17 hours ago

It is a food fraud more sophisticated and damaging to our health than our 2003 and 2006 cola investigations; says CSE director Sunita Narain.
18 hours ago

Wikipedia could be blocked in India if it fails to rectify erroneous map; here's why

Wikipedia page on Bhutan-India relations shows an erroneous map of J&K. The center has allegedly ordered the digital encyclopedia to rectify the error or face dire consequences.
1 day ago

The 117-page leaked document is marked as, "internal document, please keep confidential." The documents show China not just withheld the truth about Covid-19, but also lied to the world downplaying the numbers of confirmed cases.
1 day ago

Within a month after granting assent for a contempt proceeding against comedian Kunal Kamra, Attorney General KK Venugopal has initiated the proceedings against cartoonist Rachita Taneja of 'Sanitary Panels'.
1 day ago

Over 43 per cent voters cast their votes in the elections to the Greater Hyderabad Municipal Corporation (GHMC) which was largely peaceful and smooth, barring a goof-up which led to poll postponement in one division, election officials said.
2 days ago

China's Chang'e 5 has successfully landed on the moon in an ambitious mission to collect lunar rocks and soil to study evolution of the moon.
2 days ago

Twitter even failed to label the post depicting an Australian soldier holding a knife against a child, while the Chinese government refused to apologize.
2 days ago

Actor Urmila Matondkar, who joined the Shiv Sena on Tuesday, said she wanted to work with Maharashtra CM Uddhav Thackeray after being impressed by his handling of the Covid crisis in the state.
2 days ago

The Greater Hyderabad Municipal Corporation polling is currently underway under heavy security. The voting started at 7 am and will end at 6 pm. As many as 1,122 candidates are in the poll fray for 150 wards, constituting 24 Assembly segments with over 74. 67 lakh eligible voters
2 days ago

After former J&K Chief Minister and National Conference president Farooq Abdullah, his brother Mustafa Kamal's name has also come to the fore for allegedly benefiting from the Roshni Act, which has since been struck down by the Jammu and Kashmir High Court.
3 days ago

After debunking suicide theory, Yediyurappa's aide said that Karnataka Pradesh Congress Committee President D.K. Shivakumar has lost his "mental balance" after his past sins started tumbling out.
3 days ago
1 2 3 4 5 6 7 8 9 10 Next 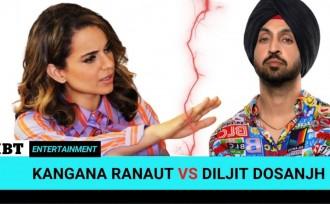 Kangana Ranaut vs Diljit Dosanjh: 'When have Sikhs bowed down'; celebs support Punjabi superstar
42 minutes ago
MOST POPULAR