A maiden fifer for Kuldeep Yadav (6/25) followed by Rohit Sharma's unbeaten 137-run knock sealed a comfortable eight-wicket victory for India in the first match of the three-match One-Day International (ODI) rubber at Tent Bridge here on Thursday. The visitors dominated England, the No. 1 ODI side, in all departments of the game as the men in blue took a 1-0 lead in the series with 59 balls to spare. It was Kuldeep's magnificent bowling display before which the English batting line-up succumbed and later, Rohit and skipper Virat Kohli (75) helped India overcome the 269-run target with ease. Chasing 269 for victory, openers Shikhar Dhawan and Rohit started the proceedings cautiously as they took India past the 50-run mark in just 6.5 overs when the centurion lofted the ball in the air over mid-off to clean the stands. Dhawan fell early becoming a victim of Moeen Ali in the eighth over leaving India at 59/1. Credit: Twitter/BCCI
2 of 6

England's joy was short-lived as incoming batsman Kohli and Rohit denied the hosts to make any further inroads in their batting line-up as they stitched a crucial and massive 167-run partnership for the second wicket as India crossed the 200-run mark. Meanwhile, Rohit also notched up his 18th ODI century off 82 deliveries as the opener cleared Adil Rashid over long-on. With the visitors inching closer towards victory, Adil Rashid came with the second breakthrough for England as Kohli missed a flighted delivery to be stumped in the 33rd over with India's scorecard reading 226/2. With 33 runs needed, Rohit and KL Rahul (9) helped India reach the target with ease as the men in blue took a 1-0 lead in the series. Credit: Twitter/BCCI
Advertisement1
3 of 6 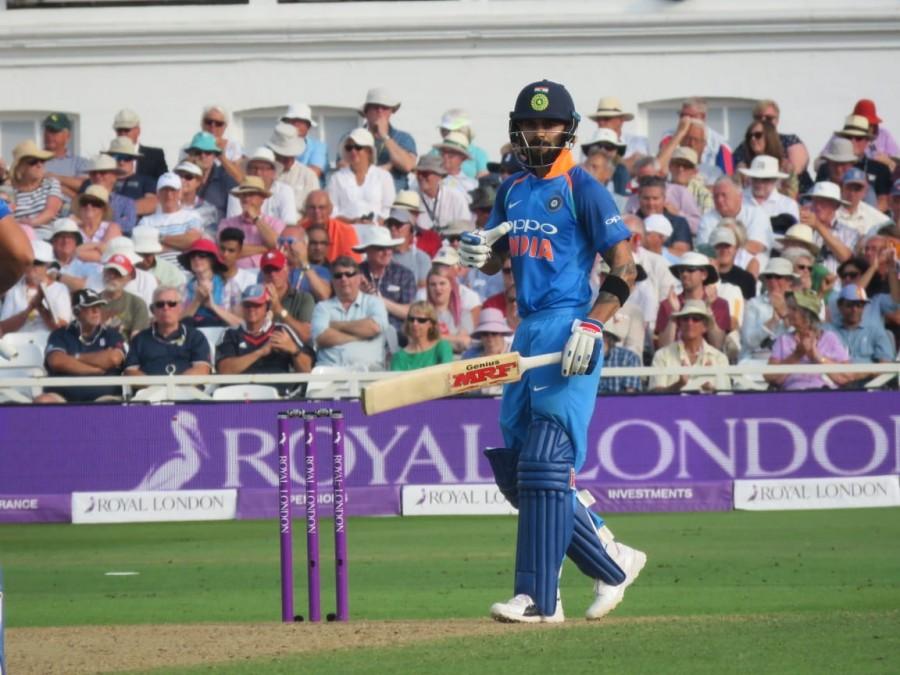 Rohit's innings contained 15 fours and four hits into the stands. Earlier, Kuldeep's heroic bowling effort restricted England at a moderate 268 runs. Despite a deep batting line-up, the hosts' succumbed before the wrist-spinner, who emerged with his best ODI figures at a batting-friendly Nottingham wicket. It was Ben Stokes (50) and Jos Buttler (53), who showed some resistance against the visiting bowling attack to push their side to a fighting total. Put into bat, England was off to a decent start as openers Jason Roy (38) and Jonny Bairstow (38) forged a 73-run partnership for the opening wicket before Kuldeep drew the first blood, dismissing the former in the 11th over. With just eight runs added on England's scorecard, Kuldeep struck again to pack back incoming Joe Root (3). Credit: Twitter/BCCI
4 of 6 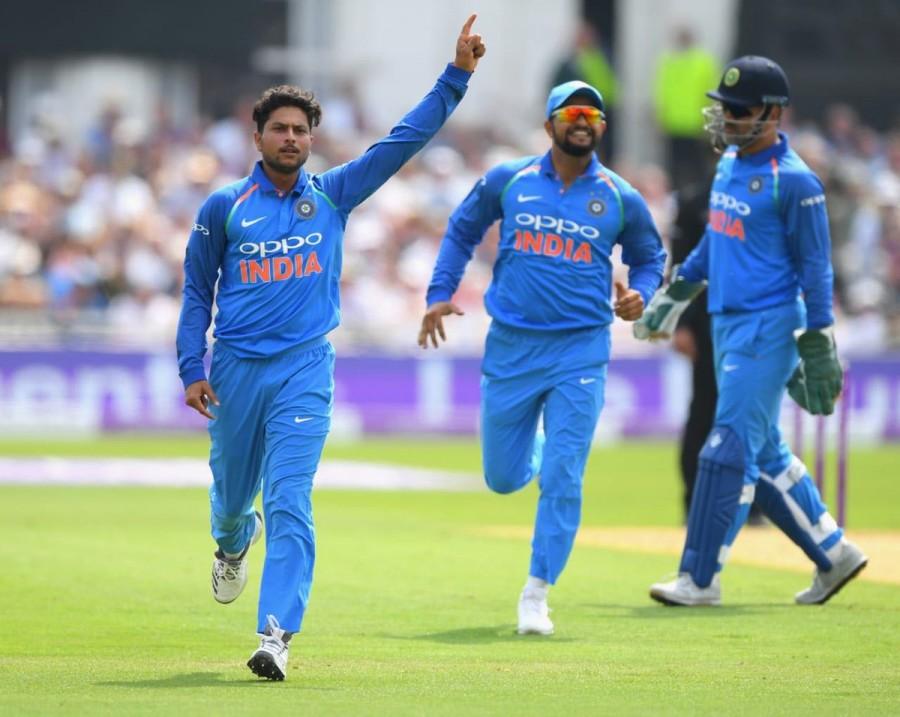 The wrist-spinner made worsened England's situation when he sent back opener Bairstow, who was caught before the wicket, leaving the hosts reeling at 82/3. Skipper Eoin Morgan then tried to nurse their inning with Ben Stokes before he became a victim of Yuzvendra Chahal in the 20th over leaving the hosts at 105/4. Stokes and Buttler then forged a 93-run stand to inch England near the 200-run mark before Kuldeep shot another bullet in opposition's line-up. The spinner scalped his fourth victim as he dismissed Buttler with England's scorecard reading 198/5. Credit: Twitter/BCCI
5 of 6 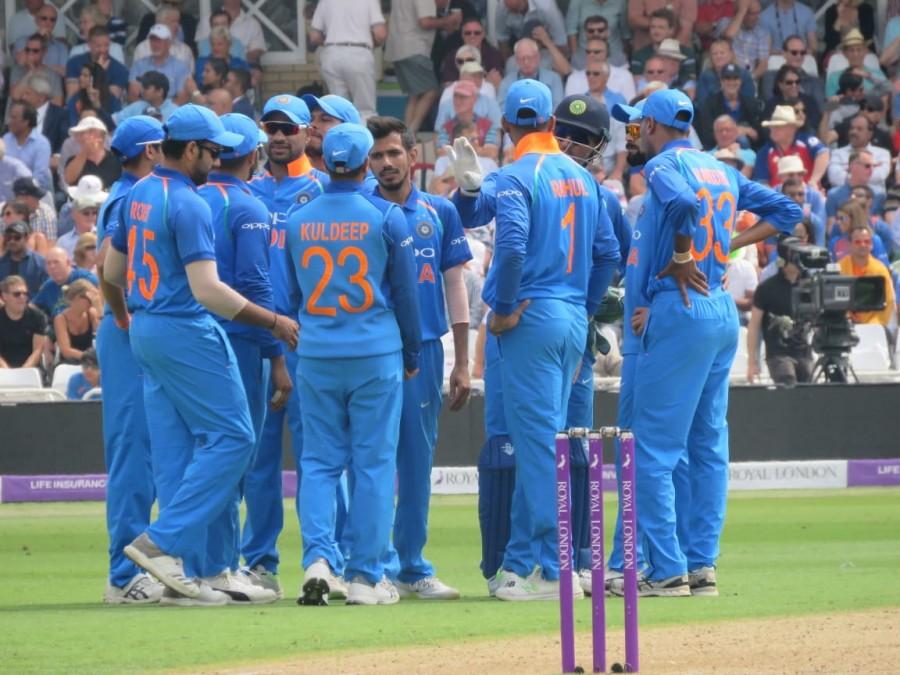 As England managed to another 16 runs to their score, Kuldeep gave another jolt to the hosts after sending back Stokes in the 45th over. There was no stopping for Kuldeep at a batting paradise Tent Bridge wicket on Thursday as he pounced his another wicket in the same over when David Willey was back to the dressing room after contributing a single run. Before falling down to Umesh Yadav, Moeen Ali and Adil Rashid, chipped in with 24 and 22 runs while Liam Plunkett respectively while Liam Plunkett contributed with 10 runs to take their side to a competitive total. Apart from Kuldeep, Umesh bagged couple of wickets leaking 70 runs from his 9.5 overs. Credit: Twitter/BCCI
6 of 6 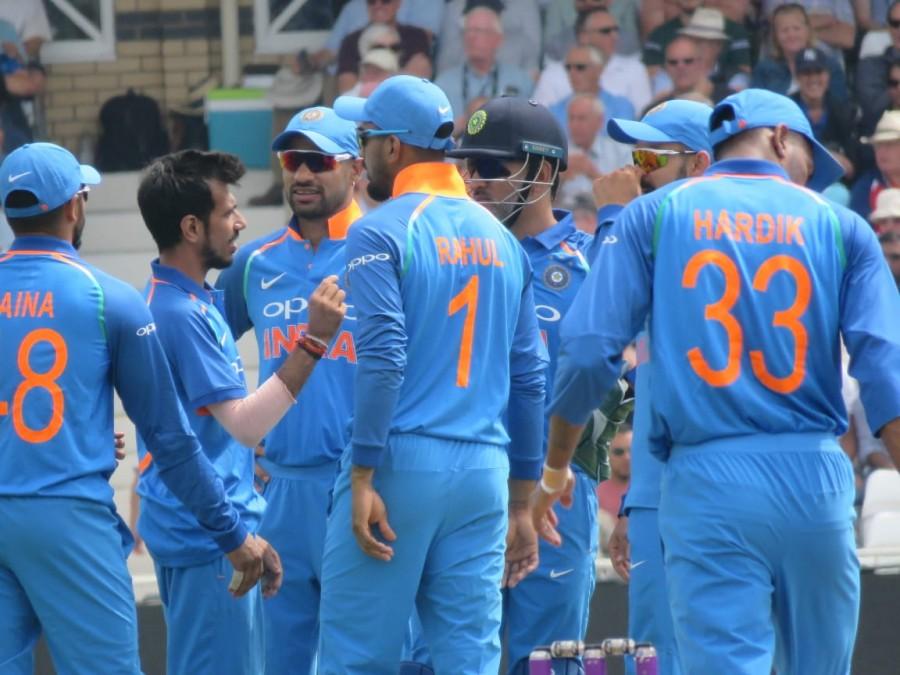