Rajasthan Royals rode a heroic batting effort by Jos Buttler to edge out Chennai Super Kings (CSK) by four wickets in a nail-biting Indian Premier League (IPL) encounter at the Sawai Mansingh Stadium here on Friday. Buttler batted through the innings to help Rajasthan overhaul a stiff 177-run target with just one ball to go. Having opened the Rajasthan innings along with England star Ben Stokes, Buttler continued to defy the CSK bowlers even as wickets fell at the other end. He remained unbeaten on 95 runs off just 60 balls, hitting 11 boundaries and a couple of sixes along the way. Despite the defeat, CSK continue to hold on to the second spot with 14 points from 11 matches. They trail league leaders Sunrisers Hyderabad by four points. Rajasthan are eighth in the 10-team table with 10 points from 11 matches. Credit: IANS
2 of 6

In an edge-of-the-seat affair that went right down to the wire, it was Buttler who gave the Rajasthan innings a powerful start by hitting David Willey for consecutive boundaries off the opening three balls. He hit Harbhajan Singh for two boundaries and a six in the next over. Ben Stokes was also in good touch at the other end and seemed set to end his run of lean form when he hit Harbhajan Singh for a six over mid-wicket in the fourth over. But the veteran off-spinner had his revenge in the very next ball when the Englishman went for another big hit but the incoming delivery managed to find the gap between bat and pad to disturb the stumps. Credit: IANS
Advertisement1
3 of 6 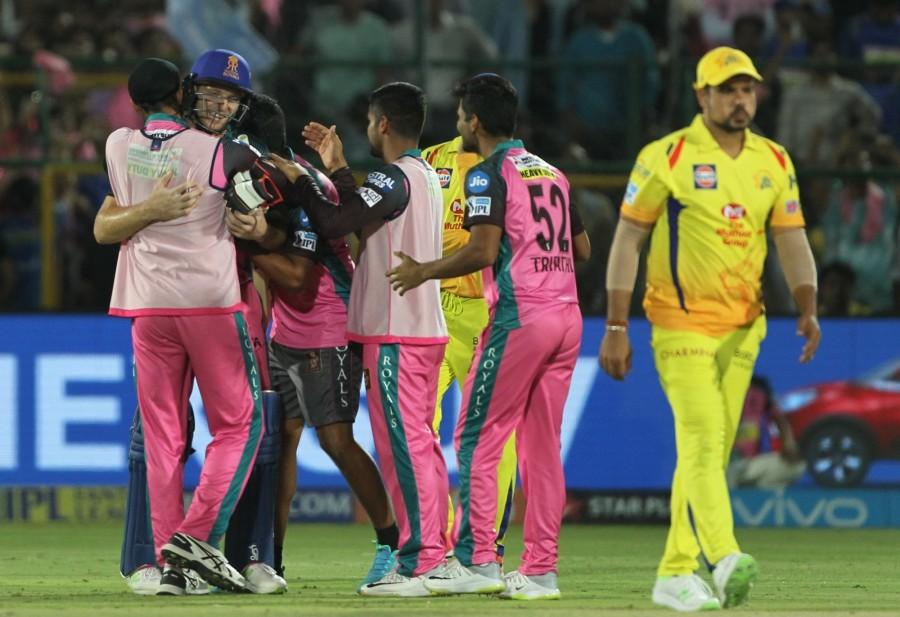 Ravindra Jadeja then dismissed Rajasthan captain Ajinkya Rahane in the next over to put Chennai in the driver's seat. Buttler and Sanju Samson then tried to steady the innings, adding 45 runs between them off the next seven overs before the latter was run out following a horrible mix-up. Prashant Chopra then handed an easy catch to Dwayne Bravo at short mid-wicket off a rather ordinary delivery from Shardul Thakur as Chennai gradually started to gain the upper hand. Stuart Binny also failed to last long as Chennai seemed destined for another win. With 28 runs needed off 12 deliveries, it was Krishnappa Gowtham who gave the chase some much needed momentum with a power packed innings that produced 13 runs off just four balls. All those runs came in the penultimate over as he smashed Willey for two sixes. Credit: IANS
4 of 6 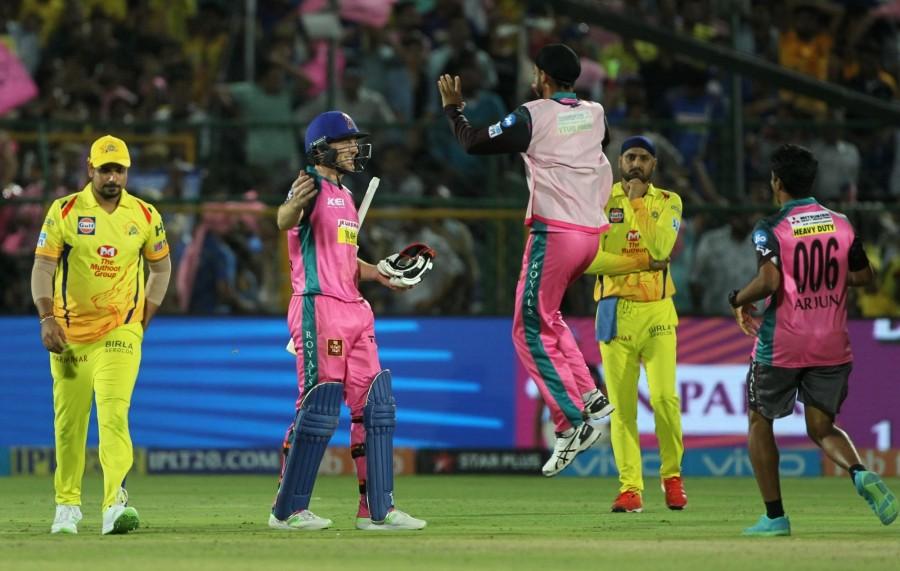 But a careless shot saw him hand an easy top edge to Mahendra Singh Dhoni behind the stumps off the last ball of the over as the visitors seemed to take the upper hand once again going into the final over. All that changed in the nail biting last over. Fittingly, it was Buttler who hit the winning runs. With 10 runs needed off the last four deliveries, the visitors missed a great chance when Buttler tried to hit Dwayne Bravo for a six but the ball skied up off the toe end of the bat. But there was no one to in position to take the catch as Buttler ran for two runs. The England star punished the visitors for that dropped chance with a six into the stands beyond the mid-wicket boundary. An overthrow in the next ball allowed him to complete the victory as the Rajasthan dugout erupted in celebration. Credit: IANS
5 of 6 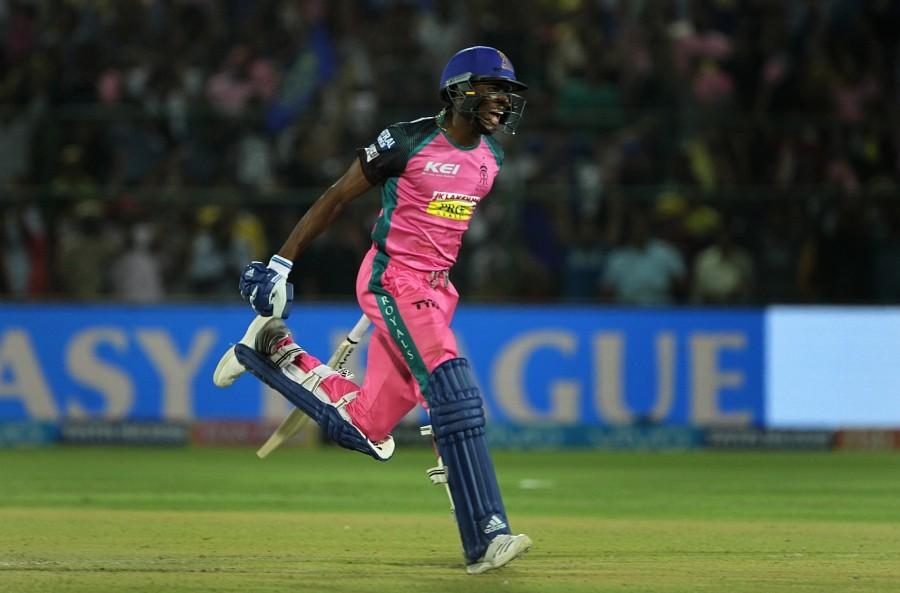 Earlier, a decent batting effort helped CSK post a fighting total of 176/4. It was a fine knock by Suresh Raina (52 off 35 balls), followed by skipper Mahendra Singh Dhoni's unbeaten 33 and opener Shane Watson's 39 runs which took the yellow brigade to a good total against the hosts. Opting to bat first, the visitors were off to a quick start as openers Ambati Rayudu and Watson accumulated 19 runs from the first two overs. However, the decent start was short-lived as Jofra Archer drew the first blood for the hosts, when a short-ball from him took an inside edge to shattered Rayudu's (12 off 9 balls) stumps in the third over. Credit: IANS
6 of 6 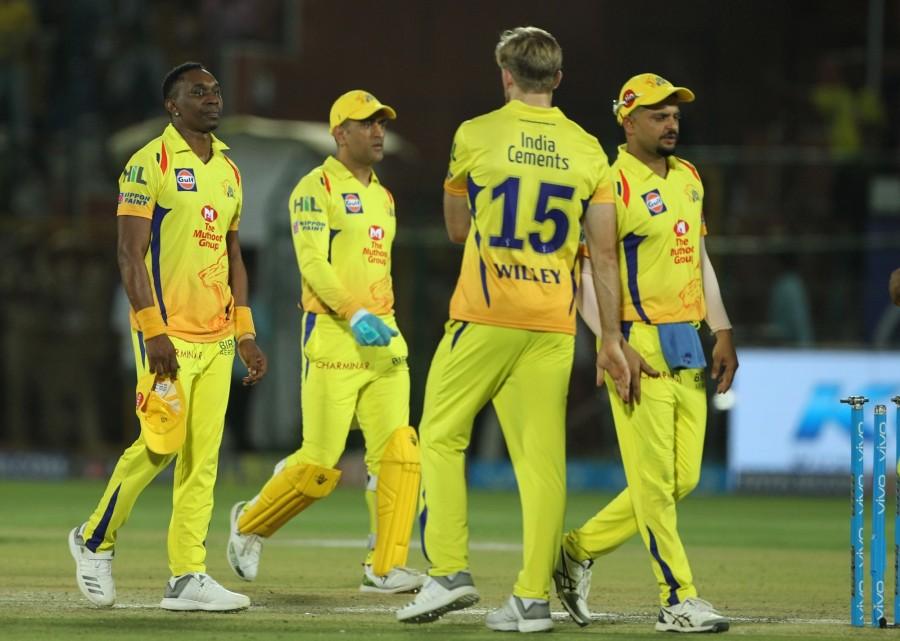