Delhi Daredevils (DD) rode a strong bowling display to notch up an 11-run victory and eliminate Mumbai Indians from the race for the Indian Premier League (IPL) play-offs at the Ferozshah Kotla here on Sunday. Chasing a target of 175 runs in what was a must-win encounter for them, Mumbai were bundled out for 163 runs in 19.3 overs. Mumbai thus completed the league phase with 12 points from their 14 matches. With Rajasthan Royals already on 14 points and Sunrisers Hyderabad, Chennai Super Kings and Kolkata Knight Riders already qualified, defending champions Mumbai saw their title defence come to an end. But it was by no means an easy victory. Despite losing wickets at regular intervals, Mumbai kept up a healthy scoring rate and kept the packed stadium on the edge of their seats till the very end. Leggie Amit Mishra was the most successful among the Delhi bowlers with figures of 3/19 in his four overs. Sandeep Lamichhane claimed 3/36 while Harshal Patel returned with figures of 3/28. Mumbai suffered their first jolt in the opening over when Suryakumar Yadav (12) holed out to long-on off the bowling of Sandeep Lamichhane. Credit: IANS
2 of 7

Yadav had smashed Lamichhane for a boundary and a six off the first two balls of the innings. Mishra struck in the seventh over when Vijay Shankar pulled off an excellent catch at the long-on boundary of Ishan Kishan (5). Mishra jolted again in his next over, getting rid of Mumbai opener Evin Lewis, who was just two runs short of his half-century. Lewis was in good touch, scoring 48 runs off 31 balls with the help of three boundaries and four hits into the stands. Lamichhane then got rid of Kieron Pollard (7) and Krunal Pandya (4) in the very next over to leave the visitors reeling at 78/5 in the 10th over. Credit: IANS
Advertisement1
3 of 7 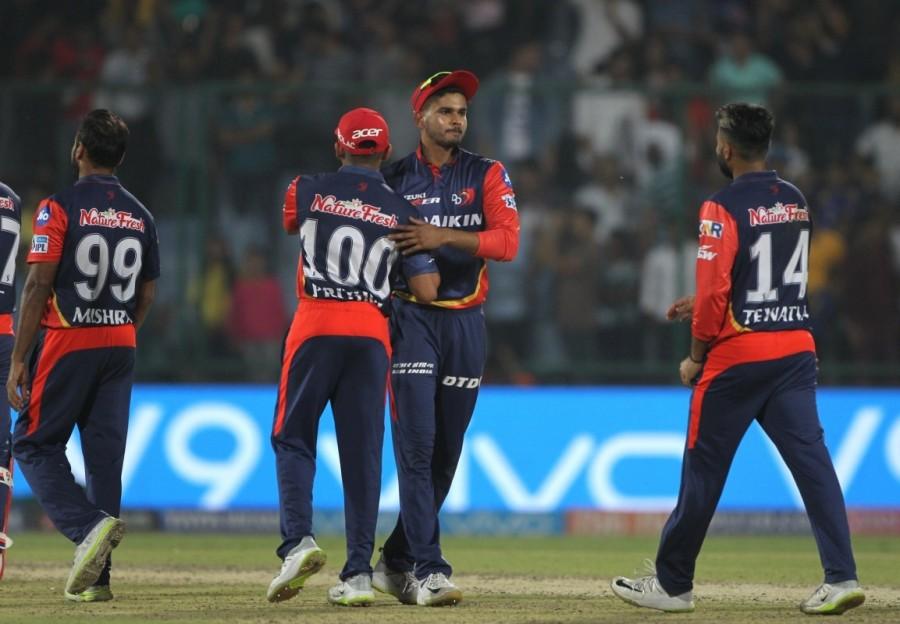 Mumbai skipper Rohit Sharma (13) and Hardik Pandya added 34 runs between them before the former fell victim to a brilliant piece of fielding by Glen Maxwell. It was Hardik who kept the score ticking at a healthy rate before falling while attempting yet another big heave off Mishra. The all-rounder scored 27 runs with two boundaries and a six studding his 17-ball stay in the middle. Ben Cutting came up with some lower order heroics with 37 runs off 20 balls. But once he fell in the second ball of the final over, it was as good as over for the visitors. Earlier, Delhi rode a half-century from Rishabh Pant and some death over heroics by Vijay Shankar to post 174/4 in their 20 overs. Credit: IANS
4 of 7 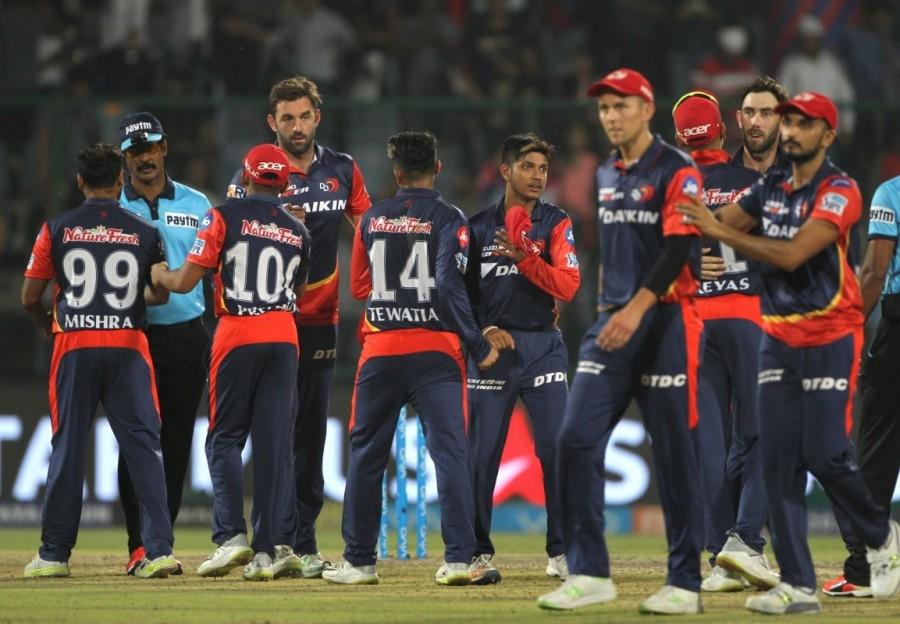 Rishabh was the highest scorer for the hosts with 64 runs off 44 balls. His knock included four hits to the fence and an equal number of sixes. Vijay shored up the run rate late in the innings and remained unbeaten on 43 runs off 30 deliveries. Delhi were off to a flying start with openers Prithvi Shaw (12) and Glenn Maxwell (22) punching Jasprit Bumrah and Krunal Pandya all around the ground. The two of them added 30 runs in just three overs before Shaw virtually gifted away his wicket with his casual approach. The 18-year-old right-hander failed to reach his crease even as Hardik hit the stumps with a direct throw. Credit: IANS
5 of 7 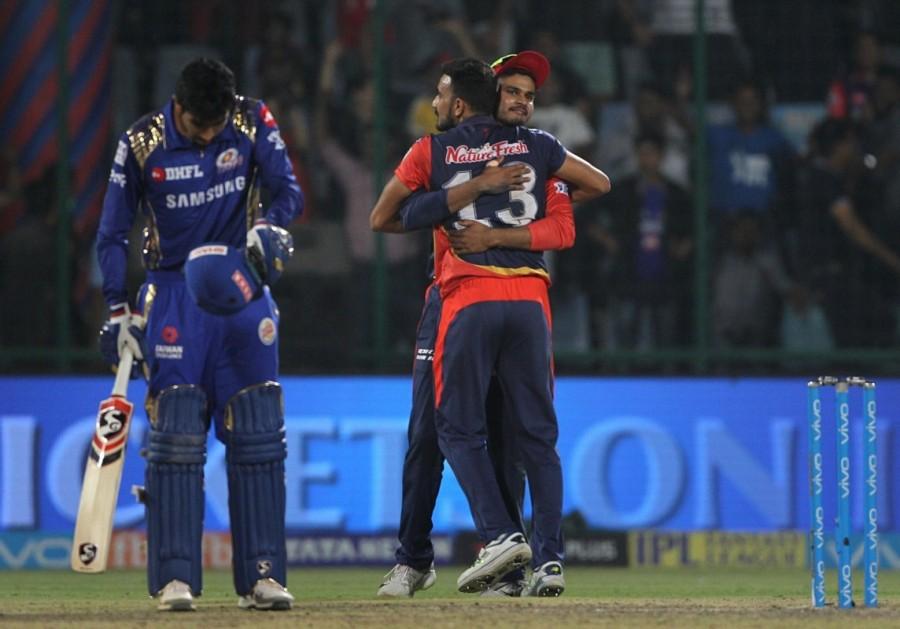 Bumrah got rid of Maxwell in the next over, uprooting the stumps with a delivery that came in sharply after pitching on the off-stump line. The in-form Shreyas Iyer did not last long, pulling a Mayank Markande delivery straight to Krunal at deep mid-wicket. Credit: IANS
6 of 7 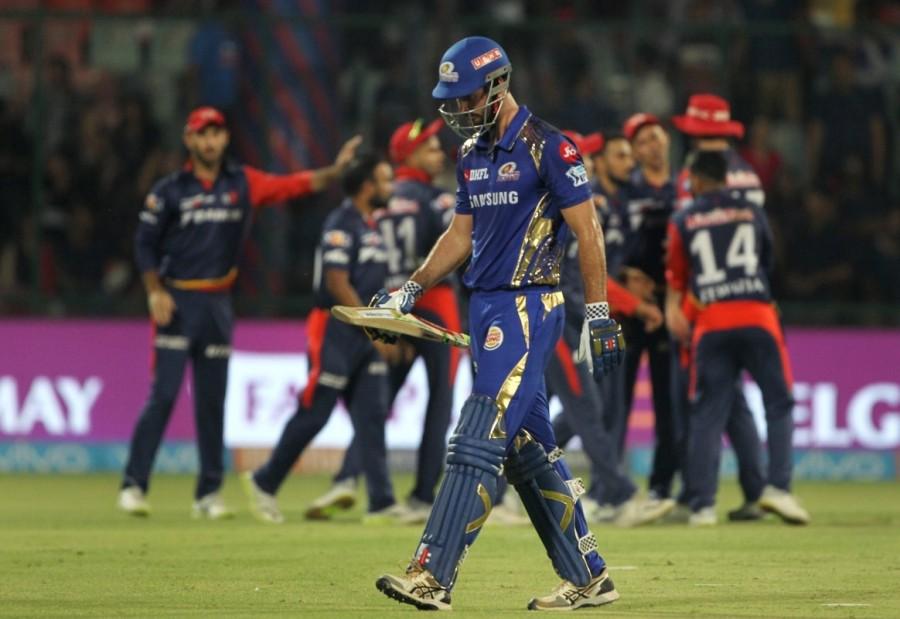 Rishabh Pant and Vijay Shankar (43 off 30 balls) added 64 runs off 47 balls between them before the former fell while attempting to pump up the flagging run rate. But Vijay went on to take the battle to the rival camp and take the hosts to a strong total. Credit: IANS
7 of 7 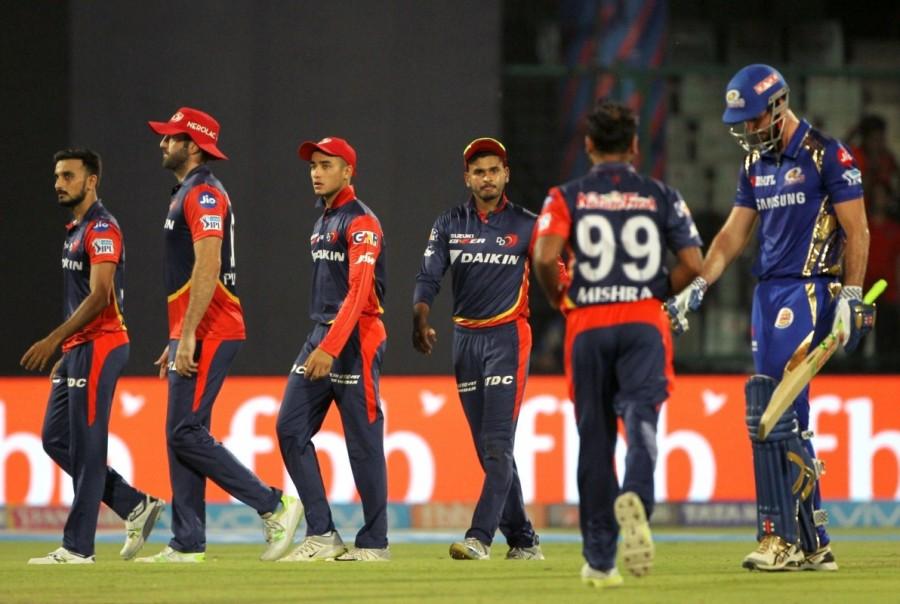