RCB were in trouble after losing openers Quinton de Kock and Manan Vohra (2), with the latter failing to justify his inclusion in place of Sarfraz Khan. De Villiers dished out a batting masterclass as he whacked Shahbaz Nadeem for five fours, while medium pacers Harshal Patel and Chris Morris too failed to control the right-handed batsman. With 78 required of eight overs, Harshal conceded two sixes and a four to bring the target down to 60 off seven overs - it tilted the match in favour of the hosts. In the following over, de Villiers hit Rahul Tewatia for a six as the bowler ended up conceding 11 runs. In the 15th over bowled by Morris, de Villiers was again on the attack, hitting his compatriot for a six and a four to reduce the asking rate under seven. Afterwards, it proved to be easy for them to secure the win. Credit: IANS
Advertisement1
3 of 5 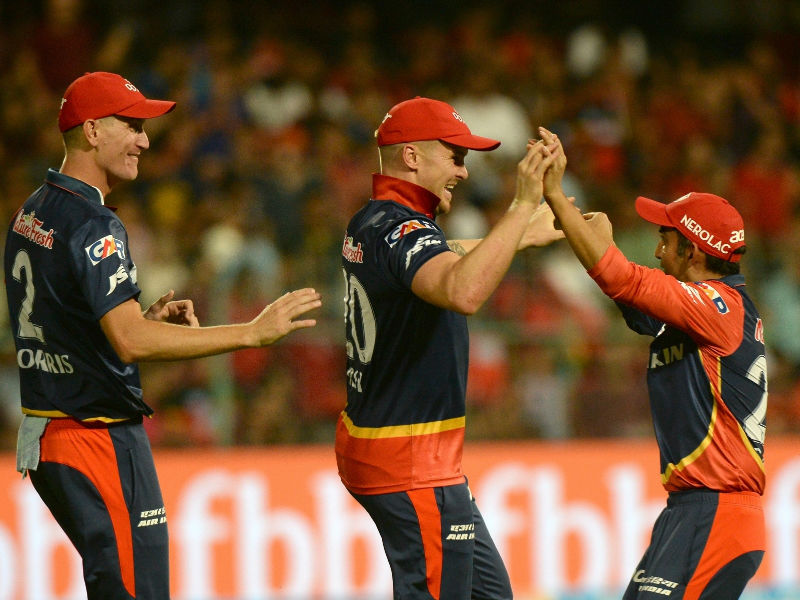 Following the win, RCB are now fifth in the points table, while Delhi are at the bottom with a single win in five games. Earlier in the first innings of the match between two bottom-placed teams, Iyer and Pant shared a 75-run partnership for the third wicket as Delhi recovered from a poor start. Put into bat, Delhi were off to a poor beginning as both the openers Jason Roy (5) and Gautam Gambhir (3) were back in the dug-out with the scorecard read just 23 runs in 5.4 overs. While pacer Umesh Yadav dismissed Gambhir, spinner Yuzvendra Chahal clean bowled Roy. Credit: IANS
4 of 5 Pant and Iyer eased the pressure on the visitors as they took time to settle down before finding occasional big shots. Spinner Washington Sundar finally broke Delhi's momentum, dismissing Iyer, who was looking good, in the 14th over with Delhi's score being 98/3. Iyer departed after hitting four fours and three sixes. With the addition of just another seven runs in Delhi' scorecard, Chahal sent back incoming batter Glenn Maxwell (4). However, Pant kept the fight alive for his side and slammed 18 runs off a Chris Woakes' 18th over to lift Delhi to 163/4. Trying to go big in the final over, Pant was finally dismissed by Corey Anderson. The Delhi batter's 48-ball 85-run knock was guided by six boundaries and seven sixes. Credit: IANS
5 of 5 Cricketer K.L. Rahul to tie knot with this Bollywood actress