Chennai Super Kings (CSK) pipped Sunrisers Hyderabad by four runs at the Rajiv Gandhi International Stadium here on Sunday to return to the top of the Indian Premier League (IPL) table. Chasing a challenging 183-run target, Hyderabad skipper Kane Williamson (84) and Yusuf Pathan (45 off 27) put up a good fight but fell short. SRH were off to a disastrous start losing three wickets for just 22 runs in 4.2 overs. Young medium pacer Deepak Chahar gave the early jolts to the hosts after bagging the wickets of opener Ricky Bhui (0), Manish Pandey (0) and Deepak Hooda (1). Credit: IANS
2 of 6

However, Williamson kept Hyderabad's hopes alive after a 49-run stand with Shakib Al Hasan (24 off 19) for the fourth wicket. With Shakib falling in the 11th over on a Karn Sharma over and Hyderabad reeling at 71/4, the skipper was then joined by Yusuf Pathan. With everything going Chennai's way, Williamson and Pathan staged a terrific fightback with their 79-run partnership, punishing every Chennai bowler. Pacer Dwayne Bravo finally got the better of the Hyderabad skipper in the 18th over with the hosts needing 32 off the last two overs. Williamson's knock was decorated by five fours and as many sixes. Credit: IANS
Advertisement1
3 of 6 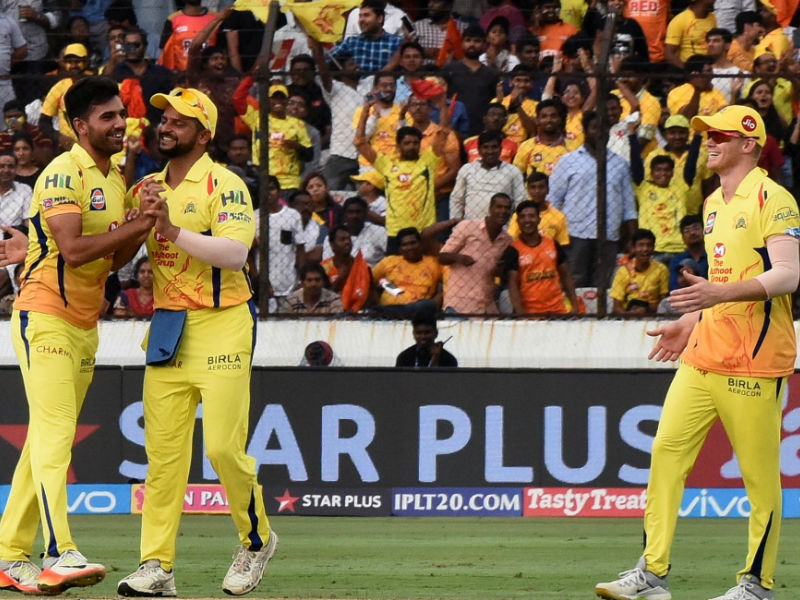 Just when it was anybody's game, pacer Shardul Thakur sent back a dangerous Pathan in the 19th over. Incoming batter Rashid Khan then slammed a four-ball 17 to make the game more interesting but the hosts failed to cross the line by four runs. For Chennai, Chahar was the pick of the bowlers after bagging three wickets and conceding just 15 runs. Thakur, Sharma and Bravo took a wicket apiece. Credit: IANS
4 of 6 Earlier, put in to bat, Chennai were off to a shaky start as Bhuvneshwar Kumar and Rashid struck early to send back both the visiting openers, Shane Watson (9) and Faf du Plessis (11) with 32 runs on board. Suresh Raina (54 not out off 43) and Ambati Rayudu (79 off 37) then gathered 112 runs for the third wicket, putting things in order for Chennai. Rayudu's bizarre run out in the 17th over saw Dhoni coming in the middle, who then shared a 38-run stand with Raina. Credit: IANS
5 of 6 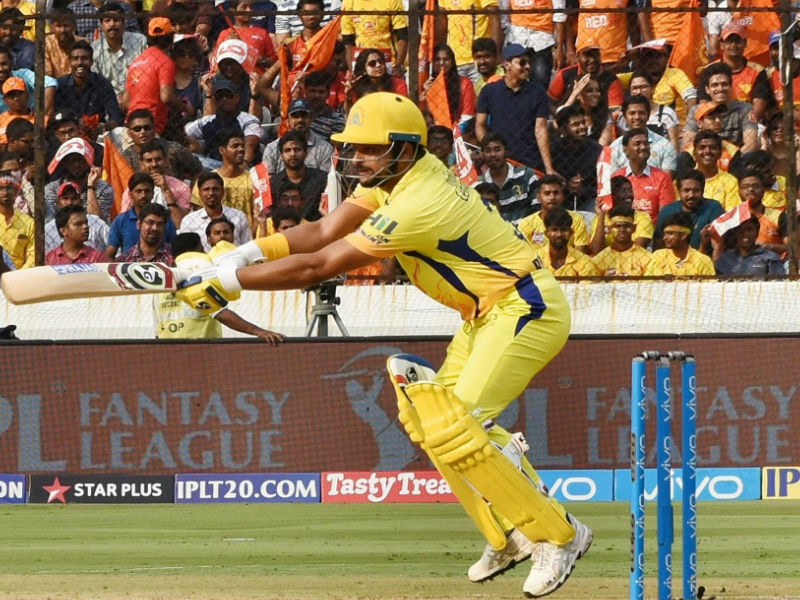 While Rayudu's innings was guided by nine boundaries and four sixes, Raina hit five fours and a couple of sixes. Dhoni's quick unbeaten 12-ball 25 in the final moments propelled Chennai to a respectable total of 182/3. For Hyderabad, both Bhuvneshwar and Rashid scalped a wicket each. Credit: IANS
6 of 6