India rode on Rohit Sharma's unbeaten century and Hardik Pandya's four-wicket haul to breeze past England by seven wickets at the County Ground on Sunday to clinch the three-match T20I series 2-1. Chasing 199 for victory, Rohit remained not out on 100 off 56 balls, and including 11 fours and five sixes. This was the right-hander's third century in the game's shortest format, making him just the second player to make three tons. Put in, England posted 198/9 despite making a blistering start thanks to medium pacer Pandya's heroics with the ball. The 24-year-old returned career-best figures of 4/38. In reply, India made 201/3 in 18.4 overs. Pandya also played an unbeaten 14-ball 33-run cameo as skipper Virat Kohli (43; 29b; 2x4, 2x6) missed out on a half-century. This was India's sixth successive T20I series win. Rohit looked at his imperious best from the get-go, even though Shikhar Dhawan's lean patch continued at the other end as the left-hander flicked a poor David Willey (1/37) delivery down the leg side to Jake Ball (1/39) at short fine leg. Credit: Twitter/BCCI
2 of 7

However, there was no stopping Rohit as India raced to 56/1 inside five overs but a brilliant catch by Chris Jordan, running from long-on and diving full length, brought an end to K.L. Rahul's (19; 10b; 1x4, 2x6) innings off a Ball delivery. Kohli and Rohit then took India to 100/2 in 10 overs and were on course for a win with a 89-run stand for the third wicket. Jordan gave England a ray of hope when things looked dim for the hosts by picking up Kohli's wicket with a sharp catch off his own bowling. With India still needing 48 runs for victory and five overs remaining, Pandya was promoted up the order. He smashed Willey for a six and two fours in the 18th over to take India to within touching distance of the target. Rohit, in the next over, completed his hundred by dabbing the ball towards backward point while Pandya hit Jordan for a six to guide India over the line. Earlier, it was Pandya who hauled the visitors back into the game after openers Jos Buttler (34; 21b; 7x4) and Roy gave England a flying start. Credit: Twitter/BCCI
Advertisement1
3 of 7 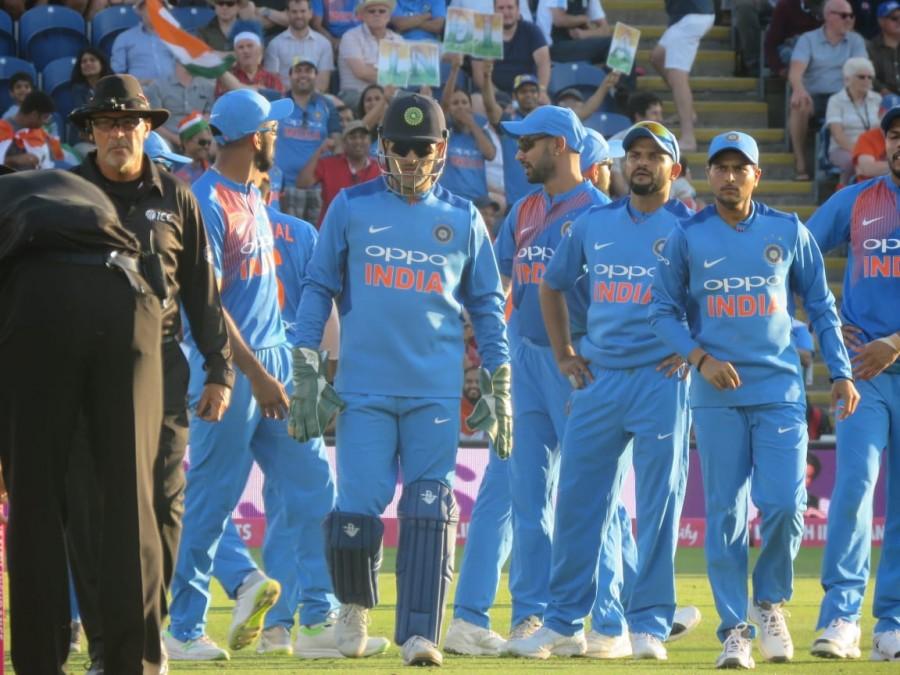 Hardik returned with career best bowling figures (4/38) but England posted a challenging 198/9. Pandya bowled 11 dot balls in the middle overs and accounted for the wickets of Alex Hales (30; 24b; 3x4; 2x6), skipper Eoin Morgan (6), comeback man Ben Stokes (14) and Jonny Bairstow (25; 14b, 2x4, 2x6). Giving 22 runs in his first over with England's top-scorer Jason Roy (67; 31b; 4x4, 7x6) taking him to the cleaners, the all-rounder came roaring back to first remove Morgan and Hales in the same over and then repeating the same in the 18th over to send Stokes and Bairstow back on his fourth and sixth delivery. Veteran M.S. Dhoni was also at his best behind the stumps, taking five catches and effecting one brilliant run out in the last ball of England's innings to get Jordan's wicket. Dhoni became the first glovesman to take five catches in a T20I, while also becoming the first man behind the stumps to pocket 50 catches in this format. Credit: Twitter/BCCI
4 of 7 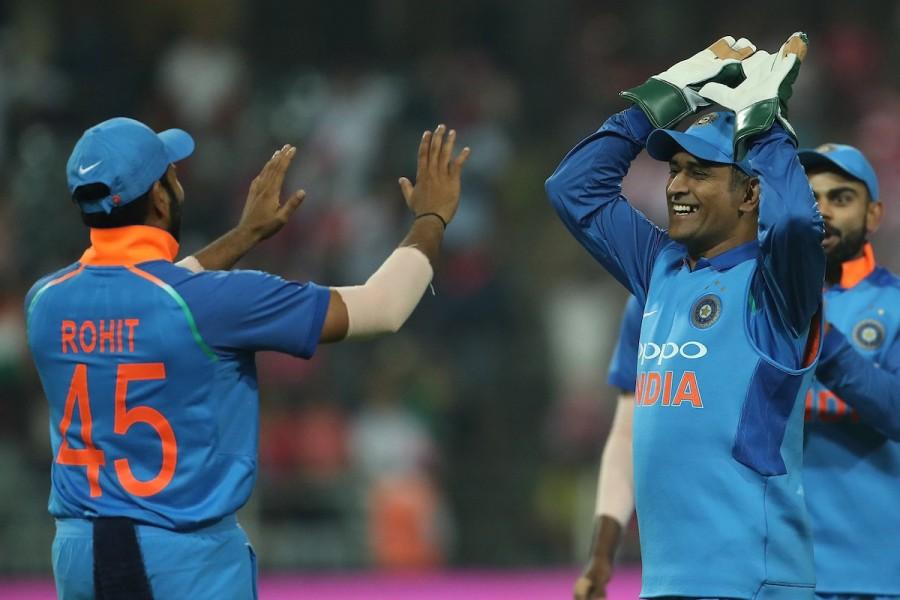 Buttler and Roy scored 73/0 in six overs with both in-form batters smacking 10 fours and four sixes in the process. Deepak Chahar (1/43) -- making his international debut in place of injured Bhuvneshwar Kumar -- did not start off well, going for 13 runs with Buttler hitting him for three fours. The 27-year-old Roy hit the first six of the match in the fourth over, a princely down the ground shot at long off before tonking Siddharth Kaul (2/35) for another maximum in the next over to show his intent. To make matters worse, Buttler was dropped by Yuzvendra Chahal (0/30) just after Powerplay although it was a difficult chance. Credit: Twitter/BCCI
5 of 7 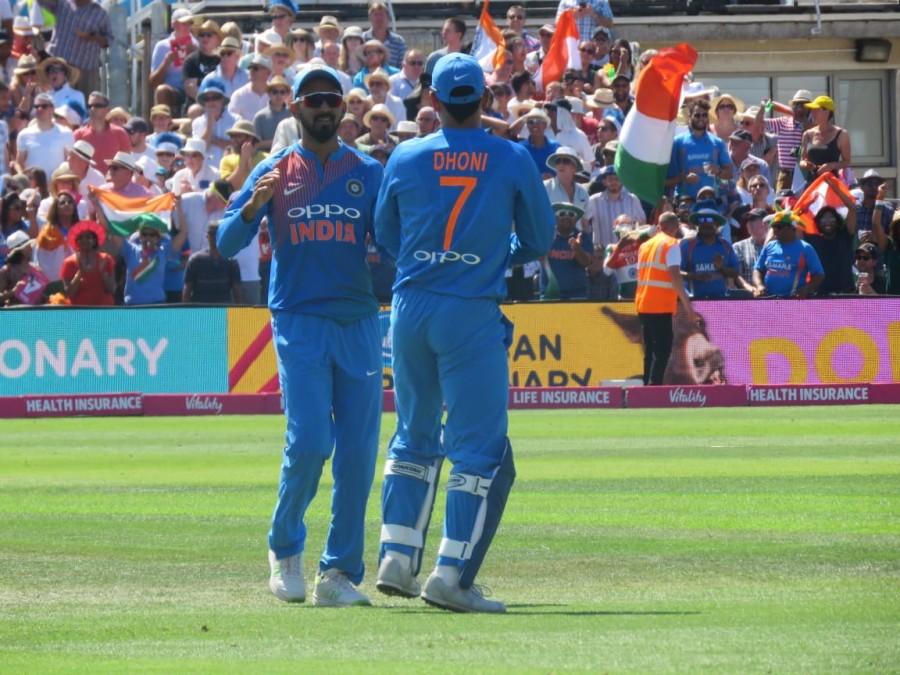 In the next ball, Roy brought up his fifty in style, slapping Chahal for a six over long-on. Kaul finally ended the carnage by rattling the stumps as Buttler tried to swipe across the line. Roy and Buttler stitched together 94-run partnership for the first wicket. Chahar then got his first international scalp with a slower delivery that the dangerous Roy flicked to Dhoni behind the stumps. At the halfway stage, England were 111/2 but Pandya then dented England's surge as Morgan top-edged a back of a length delivery which Dhoni smothered, clattering the stumps in his follow through, and Hales was caught behind. Credit: Twitter/BCCI
6 of 7 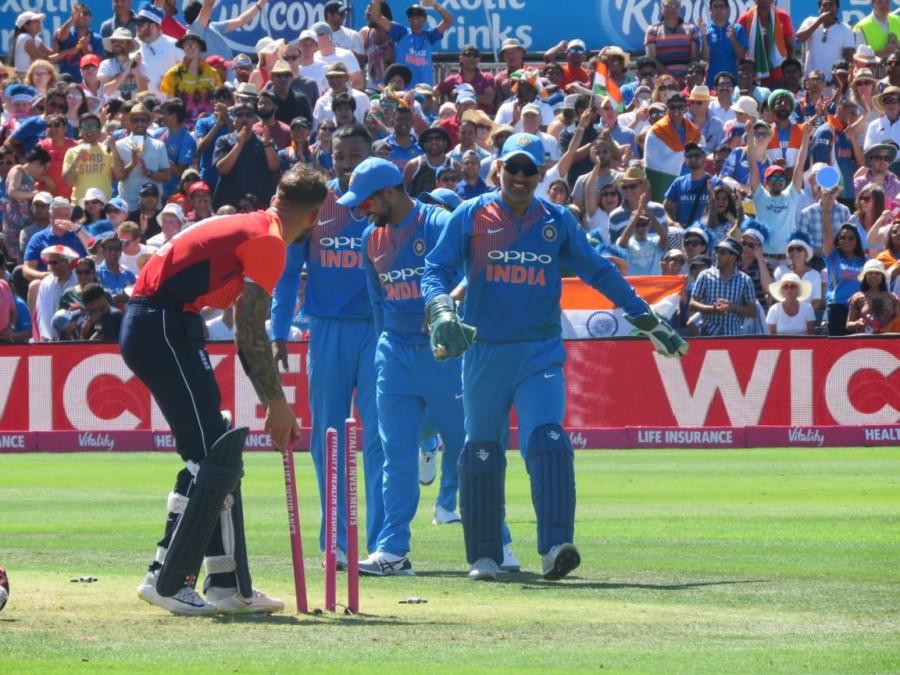 Later, Stokes holed out to Kohli at mid off and once again in the same over Bairstow, who was looking good after smacking two fours and sixes, nicked a half volley to the keeper. The rest of the batsmen could not take England past the 200-mark but still posted a more than par total. Credit: Twitter/BCCI
7 of 7 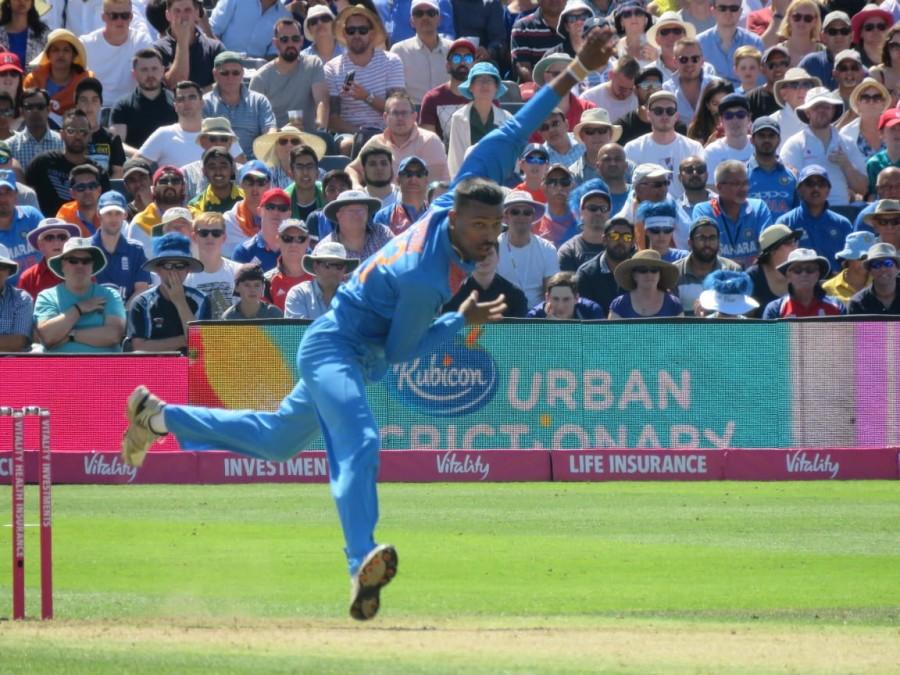