Singer Hard Kaur has created a huge controversy with her abusive rants on social media yet again. On June 17, Hard Kaur hit out against Mohan Bhagwat, the Chief of Rashtriya Swayamsevak Sangh (RSS), calling him a "terrorist" and a "racist". She has named Uttar Pradesh Chief Minister Yogi Adityanath's "Orange Rapeman".

Hard Kaur has also posted a picture of the book 'Who killed Karkare?' by S M Mushrif, on the Anti-Terrorist Squad chief Hemant Karkare who was killed by Pakistan terrorists in the 26/11 attacks on Mumbai in 2008. Hard Kaur seems to have answered, "RSS DID #indiastandup". She has also commented on journalist Gauri Lankesh's murder.

Hard Kaur's comments on the UP CM and the RSS Chief have created a huge controversy on the Net, with people objecting to her remarks and her language. The rapper has also used very abusive language and swear words in reply to people objecting to her comments on Twitter and Facebook. At the same time, she has been praised by some fans for her stand.

Hard Kaur is known to speak her mind and is notorious for her language and never holds back. Two years ago, she had also used foul words for pornstar-turned-actress Sunny Leone. What did Hard Kaur say this time?

About RSS Chief Mohan Bhagwat, Hard Kaur says that he is responsible for the terrorist attacks on India like 26/11 in Mumbai and the Pulwama attacks of 2019. She says on Facebook, "HE IS RESPONSIBLE FOR ALL TERRORIST ATTACKS IN INDIA INCLUDING 26/11, PULWAMA ATTACK. THE FACE OF ALL PROBLEMS IN INDIA. CONSTITUTIONAL CASTEISM IS A CRIME. YOU MOFO'S YOU ARE BANNED BY SARDAR PATEL JI AFTER GANDHI'S MURDER BY GODSE. YOU ARE NOT ALLOWED TO FUNCTION. IN HISTORY MAHATMA BUDDHA AND MAHAVIR FOUGHT AGAINST THE BRAHMINICAL CASTE SYSTEM. YOU ARE NOT A NATIONALIST, YOU ARE A RACIST MURDERER #fact". 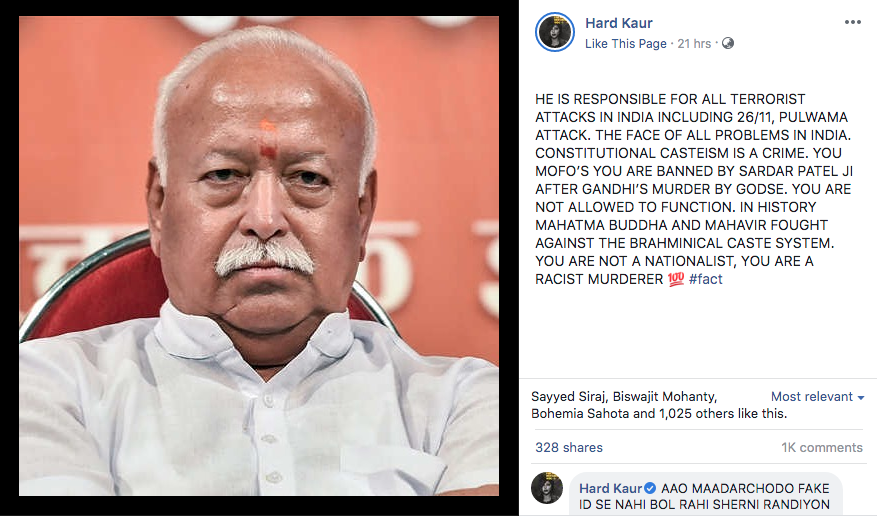 About Yogi Adityanath, Hard Kaur says, "IF THIS GUY WAS A SUPERHERO HIS NAME WOULD BE-RAPEMAN YOGI. YOU CALL HIM WHEN YOU WANT YOUR SISTERS, MOTHERS, DAUGHTERS RAPED. NATIONAL HERO. I PERSONALLY CALL HIM #ORANGERAPEMAN#indiastandup". Hard Kaur has also posted a picture of the book 'Who killed Karkare?' by former Inspector General of Police, Maharshtra, S M Mushrif. She has captioned the post, "RSS DID #indiastandup". The nature of these comments could land the singer in serious trouble and we hope she exercises restraint. What do you think?