As Bengaluru traffic police continues the vigil on traffic violations by levying hefty fines; reports of bribery, amid zero traffic management are fast surfacing. Public asks, in absense of basic roads, why has the government decided to break the back of commuters; especiallly when COVID has hit them financially as well. A case of over-enforcement, many feel.

As the COVID-19 lockdown restrictions are being gradually relaxed, Bengaluru is slowly starting to look 'normal'. Busy and heavily dug up roads, traffic congestion, and well, traffic cops stopping every other vehicle at every second junction is the new normal. People allege that traffic cops (just like the RTOs) have been given targets to collect revenue and impose fines on city commuters. This has led to massive anger among the people of Bengaluru as they call the enforcement 'over-enthusiastic' in the absence of basic traffic management.

IBTimes India received numerous such complaints alleging harassment and bribery. We scoured through social media feeds to see what people who were allegedly harassed by Bengaluru traffic cops on the roads had to say. Many claimed they were being fined without reason.

As the traffic fines under the new Motor Vehicles Act, saw a steep increase, people feel it has opened up avenues for corruption even more. According to reports and the data released by the Bengaluru Traffic Police, over Rs. 70 lakh in fines was collected in just 5-days of September 2020.

But these hefty fines come at a time when people are bearing the brunt of the COVID-19 pandemic viz. job losses, no income, and businesses badly hit. While the new Motor Vehicles Act was passed to ensure strict regulation, this is also seen as an "opportunity" by some cops as they accept "fines" (read bribe) without issuing receipts.

Many Bengaluru residents have shared their concerns about the ongoing practice of collecting fines without issuing receipts and police turning Bengaluru into a traffic police garrison. In order to avoid paying hefty fines, road users are allegedly choosing the cheaper alternative - pay bribes. The traffic cops are allegedly adding-up fines based on their whims, putting daily wagers like auto drivers in a bit of a tough spot.

Commuters also claim that they are being harassed, but all the taxes paid to the government are not being used to improve the infrastructure in the city.

"Where are the roads we paid taxes for? Why are we being harassed like this? We are jobless due to crumbling economy and now Bengaluru traffic police want to see us homeless too," questioned a frustrated Bengaluru resident. 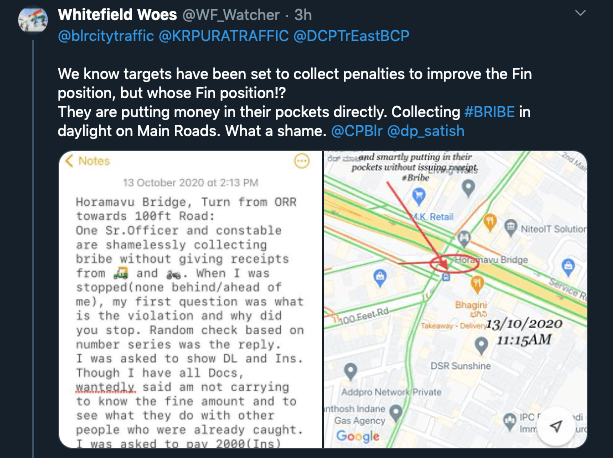 The residents also said they hoped for a change when they voted for BJP, questioning CM BS Yediyurappa's silence on the situation.

"I voted for BJP thinking they will bring a change. What is CM doing? Can he not see what the top police officers of Bengaluru are doing?" asked a resident (on conditions of anonymity) of KR Puram.

"We can only urge CM Yeddyurappa to end our miseries and tell us openly to sell our homes and fulfill government targets. They are killing us daily," said another Bengaluru resident.

These "excessive actions" by traffic cops in the city have left some to even wonder if the Bengaluru Traffic Police has "declared war on Bengalureans".

"No body minds enforcement, but where are the roads? Why take bribes blatantly? Why harrass the people like this. We have never seen so many traffic police people on the roads ever like this. It's like they have declared war on us."

"In Karnataka, there is no governance. There is only corruption and all the actions and decisions are motivated by how much money is being made. When the traffic cops pay a huge sum of money to get posted, where will they recover their investment? They'll recover from the public. On top of it, the government has set targets for the cops to book so many cases. The government should say book violators, how can you set targets. This is all circle - where cops pay the government and people in power to get posted then recover the investment from the public. This is one of the most corrupt governments we are seeing and people should understand how it is affecting their daily life," Rizwan Arshad, Congress MLA, told IBTimes in a statement.

We also reached out to BJP MP PC Mohan, who refused to comment, adding that no such instance came to his notice.

"We need to go with the intention of genuinely fining people who are violating traffic rules. The traffic rules are for the safety of the people. If the government is going to give traffic officials targets, what will they do? They are made salesmen instead of traffic officers on the ground. A salesman will naturally go behind the targets. The whole context of genuinely ensuring there is the safety of people on the road is gone out of the window when you're enabling them to go behind money," Jayanagar MLA Sowmya Reddy told IBTimes over a telephonic conversation.

Reddy also recalled an incident that was brought to her attention about an auto driver who was fined Rs 500 in the middle of the pandemic when everybody has badly hit by the economic slowdown. Auto drivers and cab drivers are barely able to make ends meet, and instead of showing compassion, they are being fined inhumanely, Reddy expressed concern.

"The government didn't even fulfill the promise of giving Rs 5,000 to auto drivers. Instead, they are just fining people left, right, and center and harassing them. This is just harassment," she added.

"The government is proving time after time that it is anti-people and don't intend to do any good for the people. This state government has been here for over a year. The funds for infrastructure development and maintenance has been cut. Roads, water, transport, and electricity are basic amenities that people deserve and the taxpayers' money is not being used for for the betterment of the city," Reddy told IBTimes

"I want to put a fine on the government for each pothole personally," Soumya Reddy, MLA.

IBTimes India made several attempts to get the version of the Joint Commissioner Police (Traffic), B R Ravikanthe Gowda IPS, but there was no response to several calls made. We left a message with the office the Jt. CP, but the officer did not take calls. Our request for a statement over email also went unanswered. This report will be updated as soon as the copy of the statement is received.

If you are facing similar issues with the Bengaluru Traffic Police, please send your complaints to editor@ibtimes.co.in with evidence. We will publish your stories and take them up with the Government of Karnataka. Your identities will be protected.

Please note: Only genuine complaints will be entertained. Unsubstantiated allegations will be rejected.

Editorial Note: Bengaluru is a wonderful city, and we do have some rule-breakers like any other city in India. The traffic police have a mandate to enforce and they must continue to do so. But citizens do have a genuine argument here: why the sudden over-excessive enforcement when management is lax? Why do we suddenly see so many traffic cops setting up Nakas at every corner of the city roads? This is unprecedented and is for everyone to see. So many complaints are coming in, not all can be wrong. Something is amiss, and this is for the government and the traffic police authorities to address.