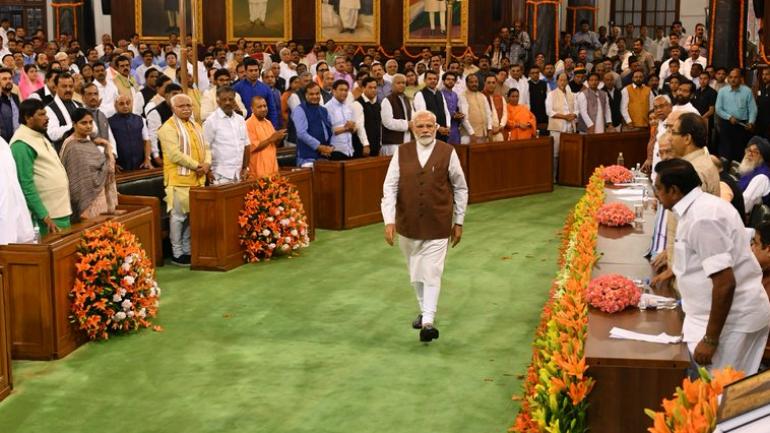 PM Narendra Modi was elected unanimously as the leader of the NDA.Twitter

As the country acknowledges Bharatiya Janta Party-led National Democratic Alliance's overwhelming success, Narendra Modi will be sworn in as country's Prime Minister for the second term on Thursday, May 30, the Rashtrapati Bhavan said.

A communique from the President's House said the oath-taking ceremony will be held at the Rashtrapati Bhavan. President Ram Nath Kovind will administer the oath, according to the official release.

"President Ram Nath Kovind will administer the Oath of Office and Secrecy to the Prime Minister and other members of Union Council of Ministers on May 30 at 7 pm at Rashtrapati Bhavan," the communique issued by President's press secretary Ashok Malik said.

PM Modi was elected unanimously as the leader of the NDA on Saturday. Later, he called on the President in his capacity as leader of the BJP Parliamentary Party, which has majority support in the House of the People following the general election to the 17th Lok Sabha.

The President, exercising powers under the Constitution, appointed Modi to the office of Prime Minister of India and sought his advise about the names of others to be appointed members of the Union Council of Ministers and indicate the date and time of the swearing-in-ceremony to be held at the Rashtrapati Bhavan.

They handed over a letter to the President stating Modi has been elected the leader of the BJP Parliamentary Party.

Letters of support from NDA constituent parties were also handed over to the President.

The NDA together has a strength of 353 MPs in the 543-member Lok Sabha out of which the BJP has a majority of 303 Members of Parliament.

(With inputs from agencies)