Under cloudy, gloomy skies England bowlers sliced open the Australian batting, but were once again, unable to remove Steve Smith. The former Australian captain was an unmovable rock as he held fort and was taking his side closer to parity in the first innings. Jofra Archer, who was brought into this Test match, as a potential weapon to hassle Smith was bowling with good pace and rhythm and Lord's was witness to a superb passage of Test cricket.

Joe Root set a field catered to short-pitched bowling and Archer was bowling with pace and hostility. Smith, who moves back and across, is well-equipped to handle the short ball, but even he was was out-paced by Archer and was clobbered on the elbow. Wringing his hands, he resumed to bat once again, but soon after a sharp bumper reared up and even as Smith attempted to duck under it, the ball smashed him in the neck where it was unprotected. 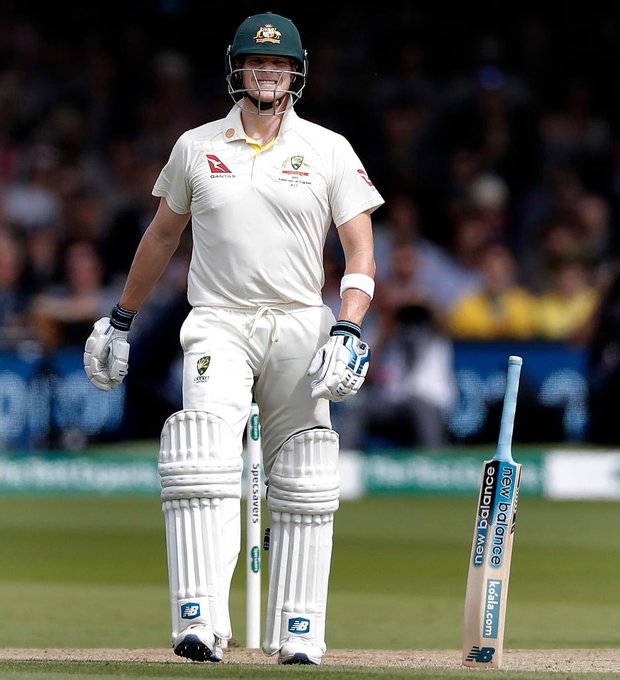 Smith was not wearing stemguards and immediately after the blow, collapsed on the ground and lay on his back for quite some time. The England players as well as the non-striker, Pat Cummins rushed across to tend to Smith, and after a lengthy examination by Australian team medical staff, the right-hander walked back to the pavilion. He was given a standing ovation by the audience and was unbeaten on 80 when the incident took place.

Earlier, Smith registered his 25th Test fifty in the 2nd Ashes Test on Saturday in London. This was Smith's 7th consecutive 50+ score in Ashes and with this feat, he became the first batsman to score seven successive 50+ scores in Ashes. He eclipsed Mike Hussey's record of six consecutive fifty-plus scores in Ashes. Smith's last seven Ashes innings scores read 239, 76, 102*, 83, 144, 142 and 66*.

The right-hander has been in stunning form and scored twin centuries to help Australia beat England in the Edgbaston Test and take a 1-0 lead.in the coveted series. Smith is only the fifth Australian batsman to score centuries in both innings of an Ashes Test and only the third Australian to script this feat in England.

At the time of writing this report, the right-hander was back out in the middle at the fall of Peter Siddle after having passed the concussion test.