Barcelona striker Lionel Messi has won his fifth European Golden Shoe after his team beat Real Sociedad 1-0 in its final La Liga Santander match of the season. The Argentine player won the award with 34 goals, for a total of 68 points during the 2017-2018 season, Efe news reported on Sunday. Messi also won the award last year, as well as in 2010, 2012 and 2013, and is the only player to do so five times. It is worth noting that the award is given based on a points system, in which goals by the German, Spanish, English, Italian and French leagues account for two points each, while scores by Austria, Belgium, Czech Republic, Croatia, Scotland, Greece, Netherlands, Israel, Norway, Poland, Portugal, Russia, Serbia, Switzerland, Turkey and Ukraine are worth 1.5 points. Credit: (Photo by Xavier Bonilla/NurPhoto via Getty Images)
2 of 5

Trailing Messi in the standings for the Golden Shoe was Liverpool's Mohamed Salah - with 32 goals and 68 points - and Tottenham's Harry Kane, with 30 scores, accruing a total of 60 points. Credit: (Photo by Jeroen Meuwsen/Soccrates/Getty Images)
Advertisement1
3 of 5 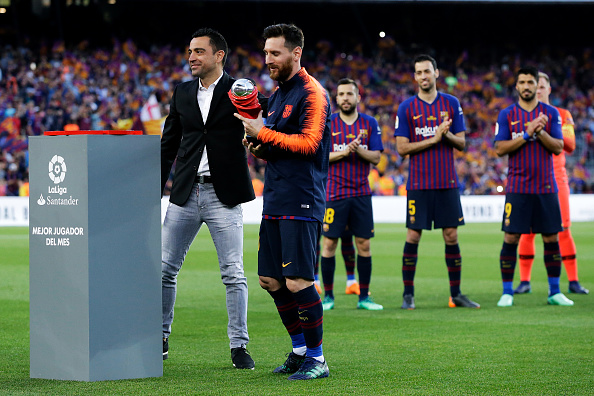 (L-R) Xavi, Lionel Messi of FC Barcelona during the La Liga Santander match between FC Barcelona v Real Sociedad at the Camp Nou on May 20, 2018 in Barcelona Spain. Credit: (Photo by Jeroen Meuwsen/Soccrates/Getty Images)
4 of 5 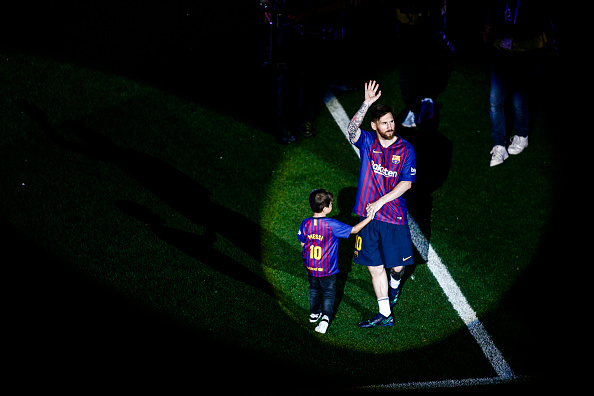 10 Leo Messi from Argentina of FC Barcelona with his children during the Andres Iniesta farewell at the end of the La Liga football match between FC Barcelona v Real Sociedad at Camp Nou Stadium in Spain on May 20 of 2018. Credit: (Photo by Xavier Bonilla/NurPhoto via Getty Images)
5 of 5 Leo Messi with his son Mateo and his wife Antonella roccuzzo during ghe celebrations after the the match between FC Barcelona and Real Sociedad, played at the Camp Nou Stadium on 20th May 2018 in Barcelona, Spain. Credit: (Photo by Urbanandsport/NurPhoto via Getty Images)
Advertisement
Related Articles
Advertisement
Latest Gallery