Sunrisers Hyderabad produced a superb bowling performance to outwit Mumbai Indians by 31 runs in a tricky low-scoring encounter here on Tuesday to condemn the defending champions to their fifth loss in six games in the Indian Premier League (IPL). On a day for bowlers, Mumbai bowled out Hyderabad for 118 in 18.4 overs but the hosts were then bundled out for 87 in 18.5 overs at the Wankhede. Hyderabad ended their two-match losing run and are third in the points table with eight points from six matches. Hyderabad bowlers hunted in pack, with medium pacer Siddharth Kaul picking three wickets, while leg-spinner Rashid Khan and pacer Basil Thampi picking took two wickets each. Sandeep Sharma, Mohammed Nabi and Shakib Al Hasan picked a wicket each. Credit: IANS
2 of 5

Earlier in the first innings, put in to bat, the Sunrisers failed to recover from the dreadful start, of being reduced to 46/4 inside the powerplay, with Shikhar Dhawan (5), Wriddhiman Saha (0), Manish Pandey (16) and Shakib Al Hasan (2) all back in the hut inside the first six overs. Skipper Kane Williamson waged a lone battle with a fighting 21-ball 29, laced with five hits to the fence before veteran Baroda batsman Yusuf Pathan (29 off 33 balls; 4x2, 6x1) took on the mantle, despite losing his partners at regular intervals. Dhawan, who returned to the playing XI after missing the previous game against Chennai Super Kings (CSK), looked uncomfortable after being hit on his thigh and was bowled by Mitchell McClenaghan the very next ball. Credit: IANS
Advertisement1
3 of 5 One ball later, Saha perished for nought after being caught behind by Ishan Kishan off McClenaghan. With the team struggling at 20/2, Manish joined Williamson for a brief 24-run third wicket stand before Hardik ended Manish's stay with a wide delivery, comfortably caught by skipper Rohit Sharma at cover. Mumbai could not have asked for a better start, with Bangladesh all-rounder Shakib falling prey to confusion, and Suryakumar Yadav's direct throw at the stumps was enough to reduce the visitors to 46/4. Pathan then joined Williamson, who looked fluent with his strokes but lost concentration on the very first ball after the strategic time-out to be caught behind by Kishan off Hardik Pandya. Credit: IANS
4 of 5 With Williamson back in the dug-out, Mohammed Nabi (14) joined Pathan for a brief 23-run sixth-wicket stand before leg-spinner Mayank Markande's googly clipped the top of middle and leg of the Afghanistan all-rounder. Pacer Jasprit Bumrah then came back to jolt the visitors with the wicket of the other Afghan Rashid Khan (6) caught behind before Markande knocked off the off-stump of Basil Thampi (3) to reduce the Sunrisers to 106/8. Sunrisers fell prey to yet another confusion in the middle, this time losing the wicket of tail ender Siddharth Kaul (2), comfortably run out by Hardik. With Sandeep Sharma (0 not out) in company, Pathan's ploy of playing the waiting game only resulted in a monstrous six off Mustafizur Rahman, but the Bangladeshi came back in style to pack back the right-hander the next ball, and restrict Sunrisers for a meagre 118. Credit: IANS
5 of 5 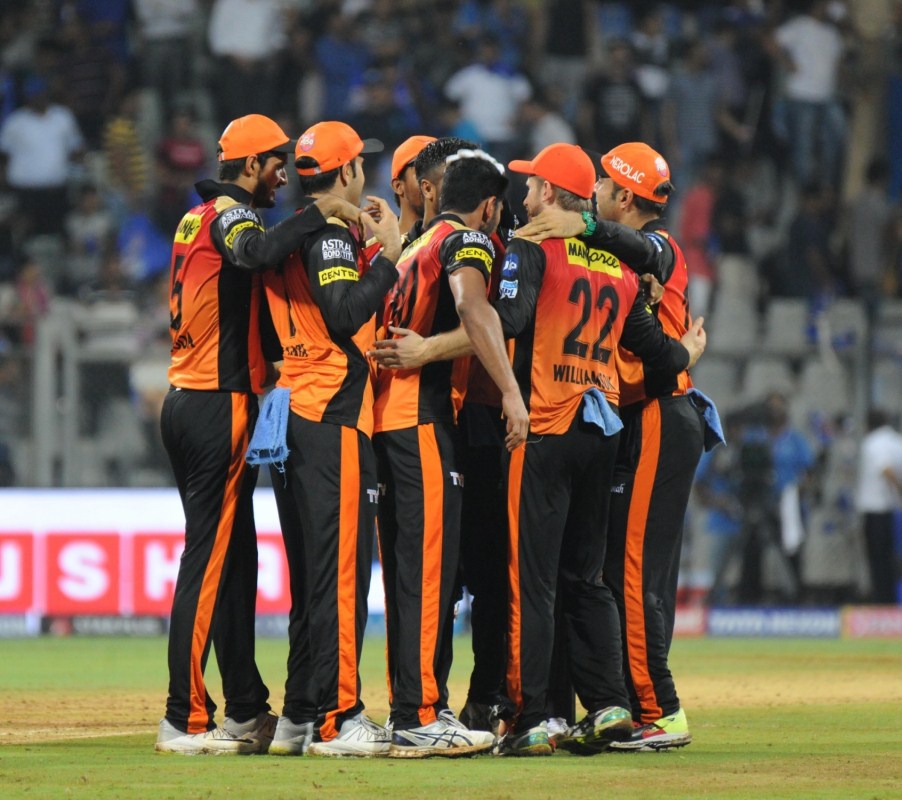