Opener SuryaKumar Yadav's 57 run knock and some useful contributions from other batters helped Mumbai Indians beat Kings XI Punjab by six wickets in an Indian Premier League (IPL) match here on Friday. With this win Mumbai is sitting at the fifth spot with six points in nine matches, while Punjab is at fourth spot with 10 points in eight matches. Mumbai started 175 run chase on a positive note, scoring 38 runs in 5.3 overs, but after that opener Evin Lewis (10) departed. Lewis was caught behind Mujeeb ur Rahman. Credit: IANS
2 of 7

New batsman Ishan Kishan (25) and SuryaKumar then joined hands and played sensibly. The duo also managed to hit few beautifully crafted shots. But just when things seemed good in the middle, in-form SuryaKumar was dismissed by Marcus Stoinis in the 12th over when scoreboard was reading 80. His 42-ball knock was laced with six boundaries and three sixes. Hardik Pandya also contributed but failed to make a good start count as he was sent packing in the 13th over. He played 13 balls and slammed 23 runs. Credit: IANS
Advertisement1
3 of 7 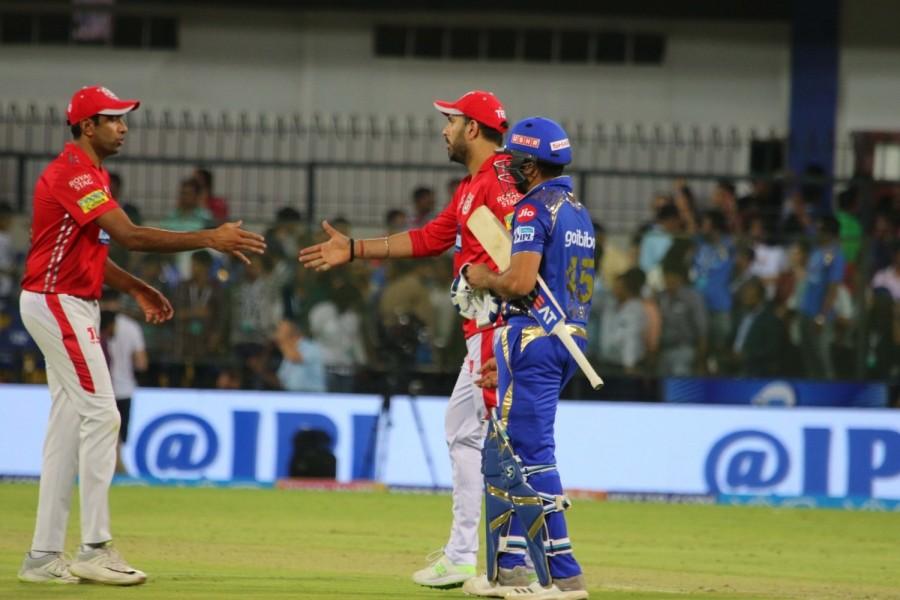 Middle-order batsmen Rohit Sharma (24) and Krunal Pandya (31) then forged an unbeaten 46 run partnership for the fifth wicket to overhaul the target with one over to spare. For Punjab, Rahman scalped two wickets. Earlier, a half-century by Chris Gayle followed by some fireworks by Marcus Stoinis in the final moments helped Kings XI Punjab post a challenging 174/6. Punjab somewhat squandered a great 54-run start by openers Lokesh Rahul (24 off 20) and Gayle (50 off 40 balls), before picking pace towards the end as Stoinis deposited Hardik Pandya for two sixes and as many fours to milk 22 runs off the final over. Credit: IANS
4 of 7 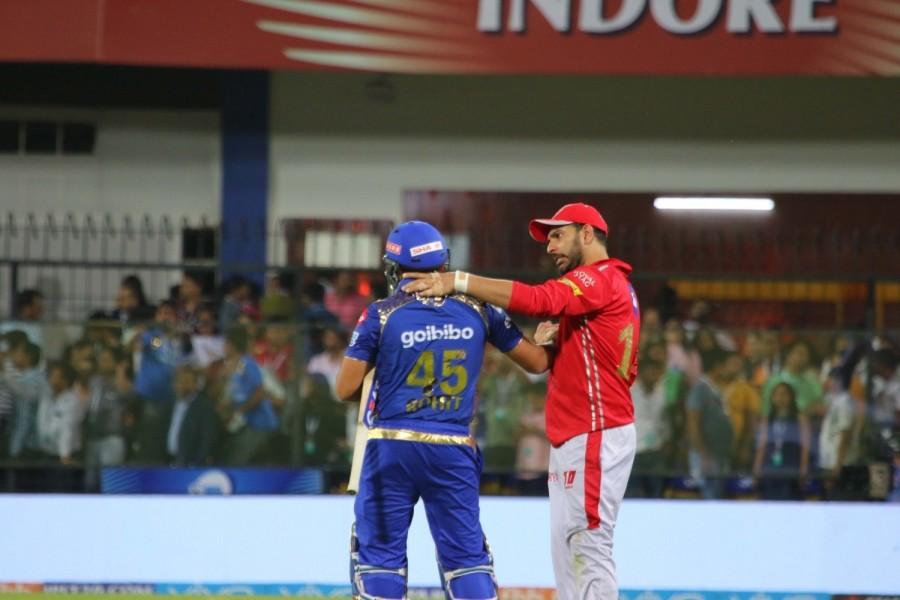 The self-proclaimed "Universe Boss" slammed his 24th IPL fifty, decorated with six boundaries and couple of sixes. Put in to bat, Punjab were off to a decent beginning as the openers took Punjab past the 50-run mark in 6.1 overs. Mumbai's find of the tournament Mayank Markande came up with the first breakthrough after dismissing Rahul in the seventh over with the scoreboard reading 54 runs. Gayle was then joined by veteran Yuvraj Singh and the duo stitched a 34-run partnership for the second wicket before pacer Ben Cutting ended the Caribbean southpaw's innings in the 12th over. Credit: IANS
5 of 7 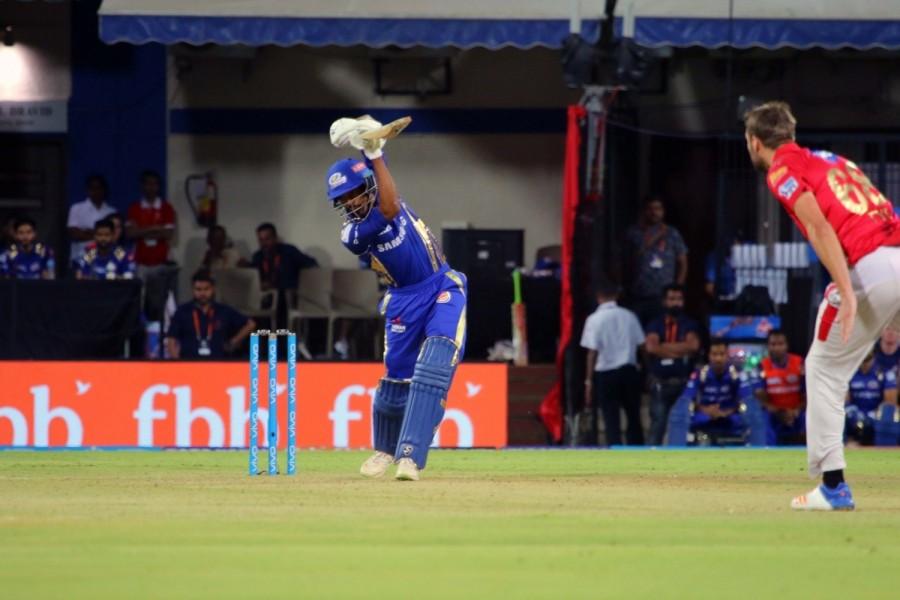 Yuvraj (14 off 14 balls), who was promoted up the batting order, once again failed to fire as the out-of-form batsman was the next to depart in the 13th over with Punjab's scorecard reading 96/3. Karun Nair and Axar Patel then showed some resistance, adding 36 runs for the fourth wicket. Pacers Jaspreet Bumrah and Mitchell McClenaghan further jolted the hosts after dismissing Nair (23 off 12 balls) and Patel (13 off 12 balls) in the 16th and 17th overs, respectively. Credit: IANS
6 of 7 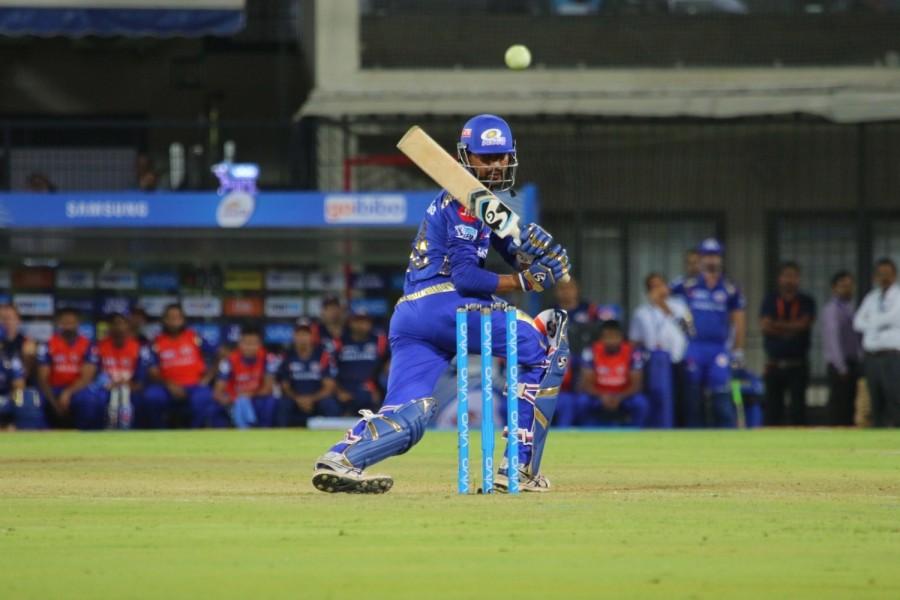 Stoinis then played a cameo of a 15-ball 29, while Mayank Agarwal chipped in with 11 runs down the order to help Punjab reach a healthy score. For Mumbai, McClenaghan, Bumrah, Hardik, Markande and Cutting bagged a wicket each. Credit: IANS
7 of 7 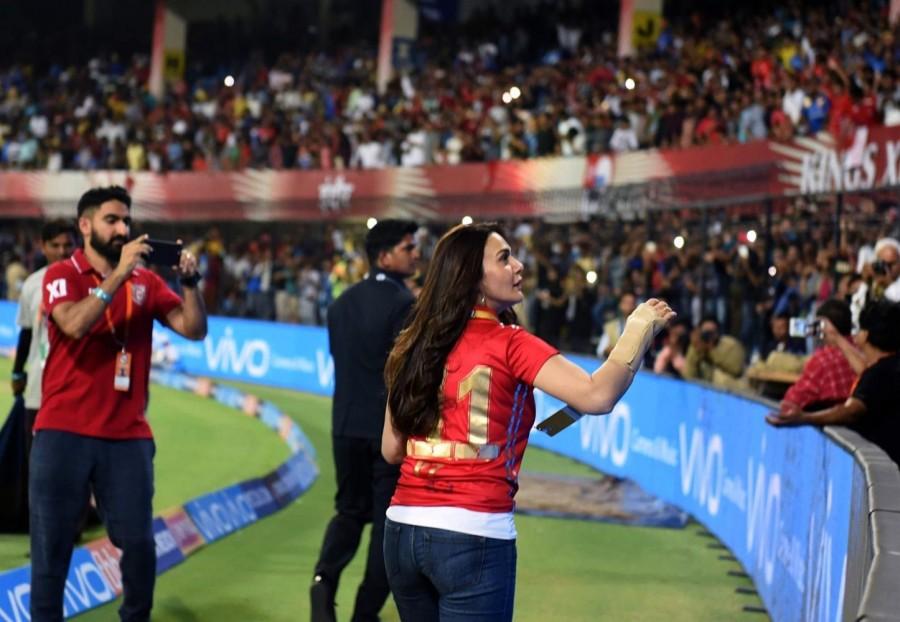