Later, Mandeep Singh's 18-ball 37 helped RCB to a challenging 176/7, but mystery spinner Narine -- used effectively as a destructive opener by KKR since last season -- made light of the target with a fiery 19-ball 50 (4x4, 5x6) along with Rana who scored a vital 25-ball 34 to steer the hosts over the line with seven balls to spare. Narine brought up his fifty in 17 balls only to perish two balls later without adding to the tally, his wicket pocketed by Umesh Yadav. Credit: IANS
Advertisement1
3 of 7 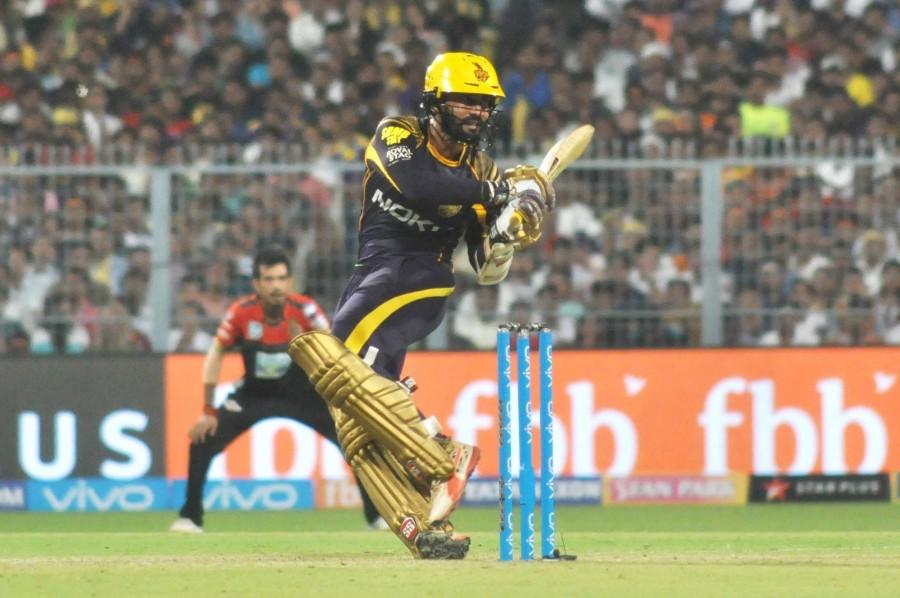 While Narine and vice captain Robin Uthappa (13) associated for a 49-run stand for the second wicket, newly appointed skipper Dinesh Karthik, who was unbeaten on 35 off 29 balls, joined hands with Rana for a 55-run partnership for the fourth wicket. For RCB, Yadav (2/27) bowled well to bag the wickets of Narine and Uthappa (13) while English pacer Chris Woakes (3/36) was the pick of the bowlers, picking up the wickets of big-hitting Australian opener Chris Lynn (5), Rinku Singh (6) and Andre Russell (15). Credit: IANS
4 of 7 Earlier, veterans De Villiers (44) and opener Brendon McCullum (43) batted well for the three-time finalists before Mandeep's cameo. KKR took wickets at regular intervals but in the last over, Mandeep's pyrotechnics guided RCB to a fighting total. As many as 16 runs were leaked in the final over by Vinay Kumar who had a forgettable comeback for KKR. Two wickets also fell in that over. Credit: IANS
5 of 7 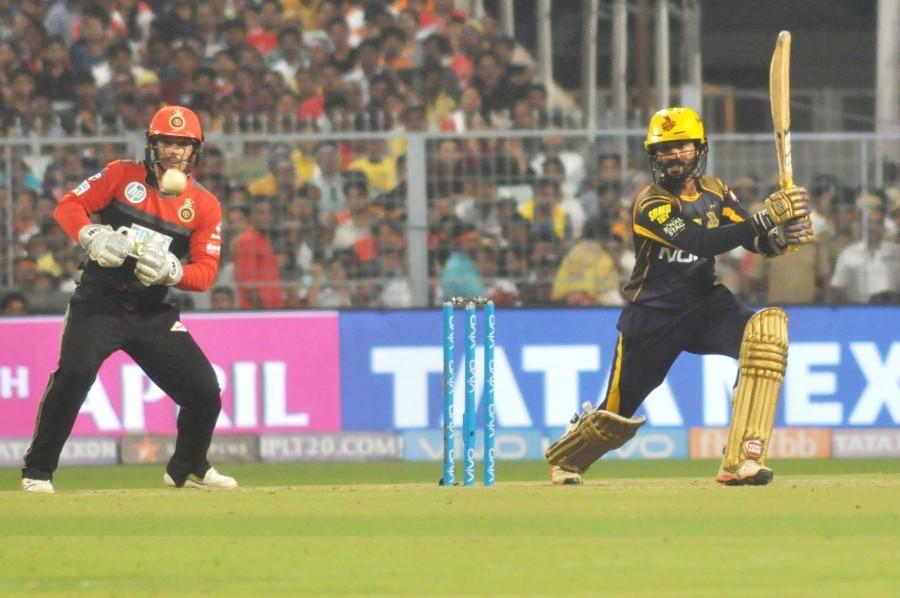 De Villiers was at his imperious best, his 23-ball 44 laced with five sixes and one four. McCullum too looked good for his 27-ball 43 at the start. De Villiers and Kohli (31) stitched together a third wicket stand of 64 runs off just 36 balls. KKR however were off to a bad start as Vinay Kumar (2/30) leaked 14 runs in the first over, McCullum flicking him down the leg side for a four in the very first ball. Credit: IANS
6 of 7 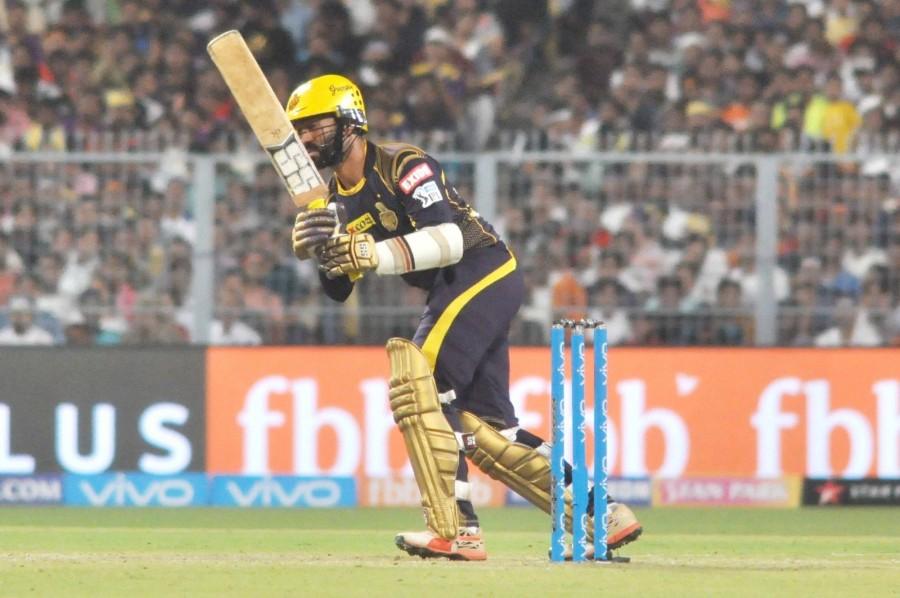 The visitors lost Quinton De Kock (4) early, the South African wicketkeeper-batsman trying to reverse sweep Piyush Chawla (1/31) and picking out Vinay Kumar at short third man. McCullum and Kohli then engineered a 45-run stand for the second wicket. But just when the visitors were looking steady with McCullum looking in fine touch and Kohli at ease playing second fiddle, Narine (1/30) got rid of the dangerous Kiwi with a shortish offbreak that dislodged the stumps. Credit: IANS
7 of 7 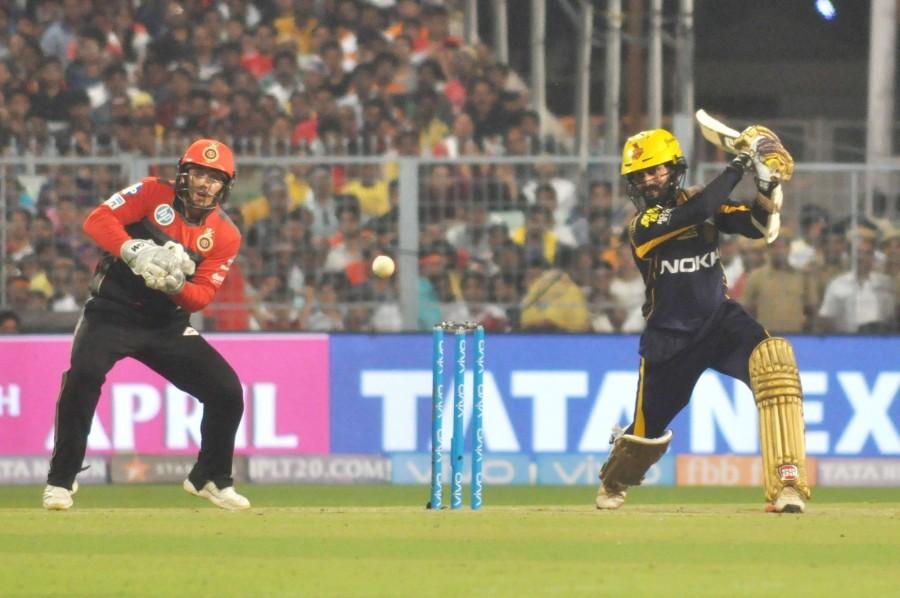 In came de Villiers and took the bowlers to the cleaners in his trademark fashion. The 34-year-old smashed Kuldeep Yadav for two consecutive sixes in the 10th over and then hit Mitchell Johnson for a four and a six two overs later. De Villiers survived a Decision Review System in the 12th over when the umpire gave him caught behind but reviews showed the ball missing the bat. He was then on 23. In just 27 balls, the pair brought up the 50-run partnership before Rana got the back of the duo in successive balls. De Villiers mistimed Rana and Johnson took the catch between long on and deep mid wicket. Kohli was yorked. Sarfraz Khan, who was retained by the franchise, managed just six runs with Johnson (1/30) taking his wicket while Mandeep and Woakes (5) fell to Vinay in the last over. Credit: IANS
Advertisement
Related Articles