Kolkata Knight Riders (KKR) captain Gautam Gambhir led from the front to knock defending champions Sunrisers Hyderabad out of the Indian Premier League (IPL) with a seven-wicket win and made to Qualifier 2 in a rain-interrupted eliminator clash at the M. Chinnaswamy Stadium here on Thursday. KKR will take on Mumbai Indians on Friday at the same venue. Chasing 48 to win in six overs after rain and wet outfield ate up a large chunk of playing time, forcing Duckworth-Lewis method to come into play, Gambhir steadied the ship after KKR were 12/3 at one stage with an unbeaten 19-ball 32. Ishank Jaggi, playing his first match, was not out on five. At the start, Chris Lynn was on the money right away, smacking Bhuvneshwar Kumar for a six in the first ball he faced. Credit: IANS
2 of 5

But the second ball saw the destructive Australian get out after replays showed Lynn had edged to wicketkeeper Naman OJha off a Bhuveshwar near-yorker. Yusuf Pathan, promoted up the order to score at a brisk pace, lasted just one delivery before he was run out. Robin Uthappa did not last long too, holing out to Shikhar Dhawan at deep mid wicket off Chris Jordan's bowling. Earlier, KKR rode on a superlative show by their bowlers to restrict Sunrisers Hyderabad to 128/7 in 20 overs. None of the Hyderabad batsmen could score a half century, with skipper David Warner managing only 37 off 35 balls as the highest score of the innings. Nathan Coulter-Nile (3/20) was the pick of the bowlers while Umesh Yadav (2/21) continued his good show as the two-time IPL champions made the most of the slow Chinnaswamy wicket to keep Warner and company in check. Credit: IANS
Advertisement1
3 of 5 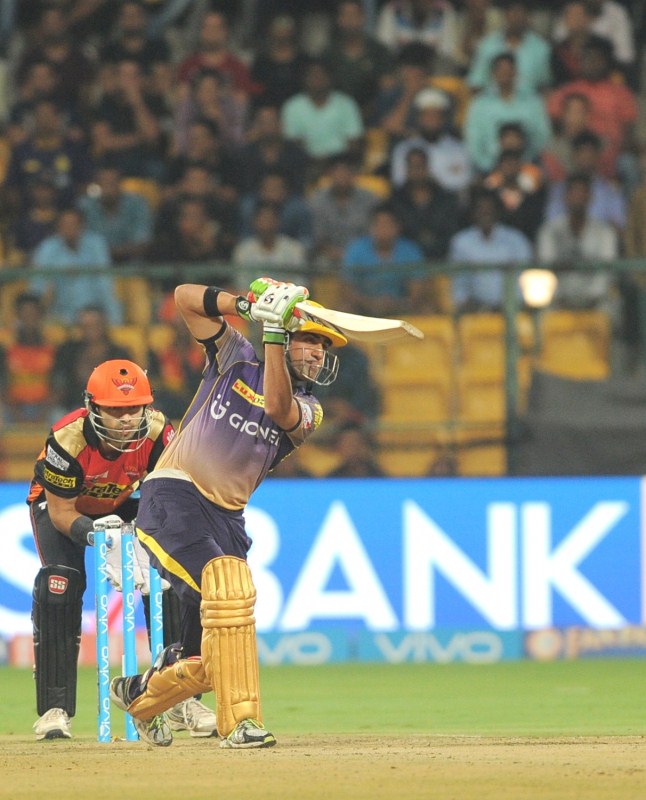 Coulter-Nile leaked just three runs from the penultimate over with Trent Boult (1/30) allowing just seven in the final over also taking the wicket of Naman Ojha (16) off the final ball. Hyderabad got off to a sedate start, managing just 30/1 in the Powerplay. In-form Shikhar Dhawan (11; 13b; 1x4) skied a rising Umesh delivery for wicket-keeer Robin Uthappa to pouch the ball. Warner, in red-hot form, found the fence just twice in the first six overs with Dhawan pulling Umesh for another boundary before falling to his India teammate couple of overs later. It took the generally explosive Warner eight overs to hit the first six of the match, punishing a poor Piyush Chawla ball by rocking on to his backfoot and pulling the leg-spinner to deep midwicket. At the halfway stage, the defending champions were 61/1. With Shah Rukh Khan in attendance, the men in purple did well to put a lid on Hyderabad's run flow. Credit: IANS
4 of 5 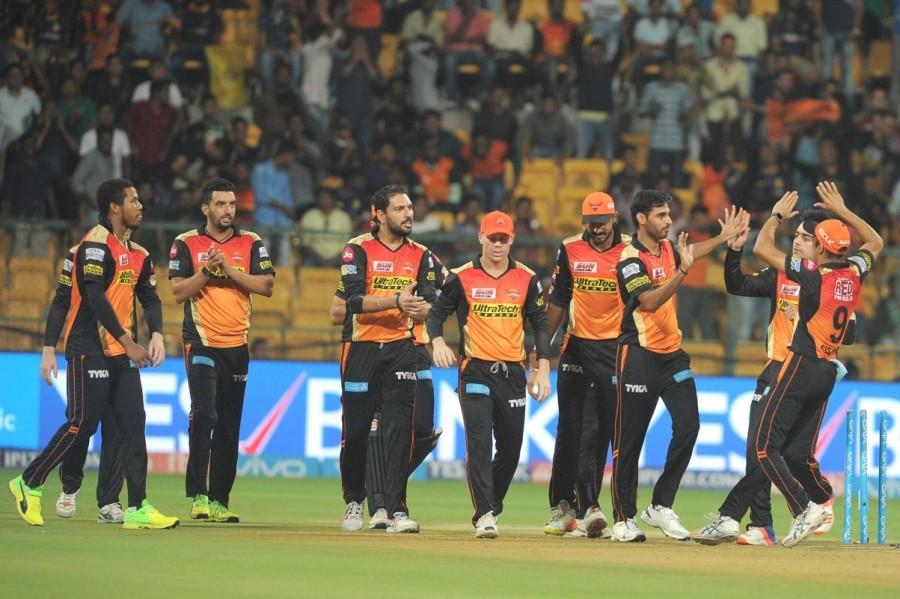 Umesh and Boult bowled brilliantly in the first 10 overs with the pair conceding 16 runs in three overs and 10 runs in two overs respectively. Fit-again Coulter-Nile looked in good shape too, taking the wicket of New Zealand captain Kane Williamson (24; 26b; 2x4, 1x6) who hit a good length delivery outside off stump straight to Suryakumar Yadav -- playing in place of injured Manish Pandey -- at extra cover. In the next over, leg-spinner Piyush Chawla -- drafted in for Colin de Grandhomme -- scalped the priced wicket of Warner who saw his middle stump uprooted trying to pull a back of a length delivery. Credit: IANS
5 of 5 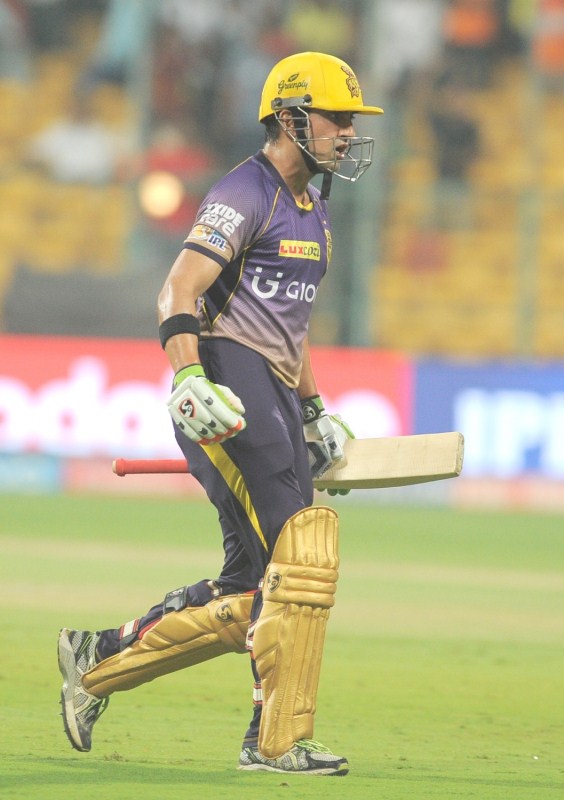 Yuvraj Singh (9; 9b; 2x4) struck two good looking boundaries but fell to Umesh's guile, pulling a bouncer straight down the throat of Piyush at deep square leg. With the ball not coming on to the bat, Hyderabad batsmen could never get going. Vijay Shankar and Naman Ojha eked out an expensive over from Boult taking the Kiwi pacer for 13 runs. But Shankar was out soon with Coulter-Nile taking his wicket only to pull off a superb catch off his own bowling to sent Chris Jordan back in the hut for a golden duck. Credit: IANS
Advertisement
Related Articles

IPL 2022: LSG vs RR live-stream, squad, timings and everything you need to know about today's match

IPL 2022: CSK vs GT live-stream, squad, timings and everything you need to know about today's match

IPL 2022: KKR vs SRH live-stream, squad, timings and everything you need to know about today's match
Advertisement
Latest Gallery