Chasing a daunting target of 338 runs, the Kiwis could only manage 331/7 in their allotted 50 overs. Colin Munro (75), skipper Kane Williamson (64) and Tom Latham (65) were the major contributors for New Zealand. For India, pacer Jasprit Bumrah scalped three wickets and leg-spinner Yuzvendra Chahal took two. India have clinched the three-match ODI series 2-1. The visitors had won the series opener in Mumbai by six wickets before the Indians won the second match by the same margin in Pune to draw level. India captain Virat Kohli was declared the man of the series for scoring 263 runs in the three matches. He has notched up two centuries in this series. This was the first day-night match at this venue. The Kiwis were off to a flying start with openers Martin Guptill and Munro going after the Indian bowlers. Credit: IANS
2 of 5

Bumrah struck the first blow for India when a miscued shot by Guptill saw Dinesh Karthik latch on to the catch at mid-off. It was the 50th ODI wicket for Bumrah, who is the second fastest Indian bowler to reach the landmark, completing the feat in 28 matches. Former pacer Ajit Agarkar holds the record at 23 matches. Munro and Kiwi skipper Kane Williamson then put together a partnership of 109 runs to put the visitors on a firm footing. Chahal broke the partnership when Munro was bowled after failing to read the turn. Munro, who was the highest scorer for the visitors, hit seven boundaries and three sixes during his 62-ball stay in the middle. Chahal claimed his second wicket four overs later, sending Williamson back to the pavilion. The Kiwis however, stayed firmly on course with Latham and Ross Taylor adding 79 runs between them off 76 deliveries. But the dismissals of Taylor and Henry Nicholls broke the visitors' momentum as the hosts made a strong comeback. Credit: IANS
Advertisement1
3 of 5 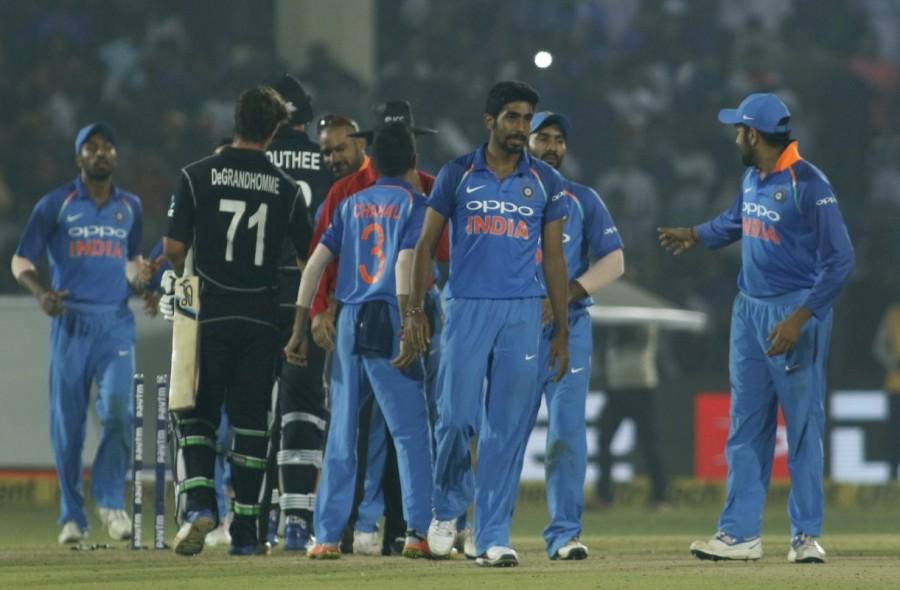 Latham was run out following a horrible mix-up with Colin de Grandhomme in the very next over while Bumrah accounted for Mitchell Santner with two balls remaining. With the Kiwis needing 11 runs to win off the last ball, a desperate slog by Tim Southee only earned a boundary at the mid-wicket fence as the Indians celebrated. Earlier, brilliant performances from opener Rohit Sharma and Kohli helped India post a daunting 337/6 after being asked to bat first. Rohit was the top scorer for India with 147 runs while Kohli slammed 113 to cross the milestone of 9,000 ODI runs. Rohit struck his 15th century in ODIs, the fifth of this year and the first against New Zealand. Kohli slammed his 32nd ton and the fifth against the visitors to help India score the highest total in 15 ODIs here. The previous was 303 by South Africa against India in 2015. It was also Kohli's sixth century in 2017, the most by a captain in a year, beating five by Sourav Ganguly (2000), Australia's Ricky Ponting (2003, 2007), South Africa's Graeme Smith (2005) and AB de Villiers (2015). While Rohit and Kohli helped India to cross the 250-run mark comfortably, after the former's departure, the middle-order batsmen failed to perform. In the last 10 overs, India scored only 85, a credit to the visitors who got their death bowling spot on. Credit: IANS
4 of 5 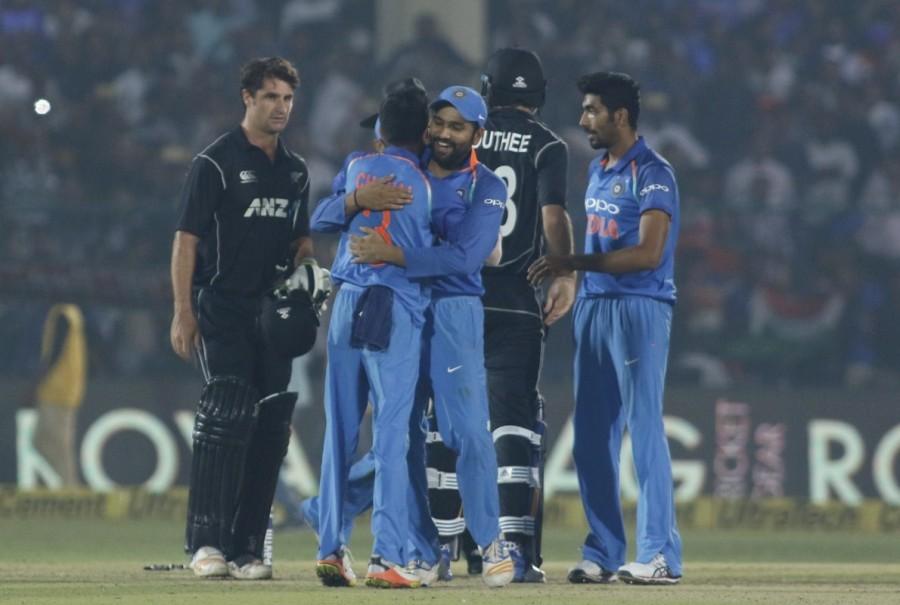 It was a steady start for India as both openers Shikhar Dhawan (14) and Rohit put on 29 runs with some brilliant strokes before Dhawan was dismissed by Southee in the seventh over. It turned out to be the only success for the visitors for a long time as Rohit and incoming batsman Kohli applied themselves perfectly in the middle to frustrate the bowlers till the 42nd over. The duo forged a 230-run partnership, the highest stand between the two, going past the 219 set against Sri Lanka earlier this year. But just when things seemed perfect, Rohit was dismissed by Mitchell Santner, caught by Southee, while trying to pace up the innings. His 138-ball knock was laced with 18 boundaries and two sixes. "Felt really good to spend some time out in the middle. Having missed out in the previous two games, I wanted to make it count," Rohit said later. New batsman Hardik Pandya, who was promoted up the order, joined Kohli but scored just eight runs in six balls. Credit: IANS
5 of 5 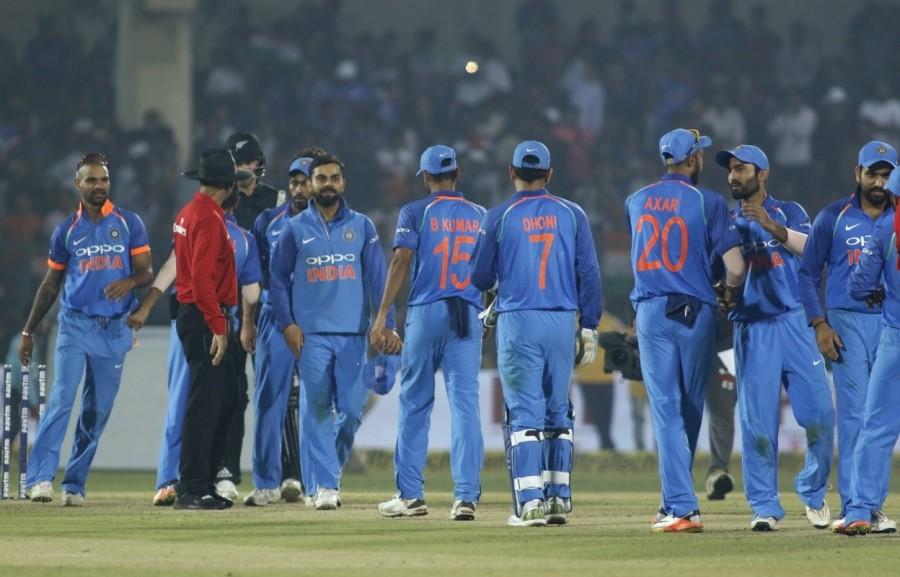