https://data1.ibtimes.co.in/en/full/759929/cancelling-olympics-option-if-covid-situation-worsens.jpg
Cancelling Olympics an option if Covid situation worsensIBTimes IN

Olympic silver medallist Mirabai Chanu was accorded a hero's welcome on her return to Manipur on Tuesday.

On Saturday, the diminutive lifter had opened India's account at the ongoing Tokyo Olympics in style, winning silver in the women's 49 kg category. Chanu lifted 202 kg (87kg+115kg) to better Karnam Malleswari's bronze in the 2000 Sydney Olympics.

On reaching the Imphal international airport here, Chanu broke down as she hugged her mother Saikhom Tombi, before being felicitated by Manipur Chief Minister N. Biren Singh.

Notwithstanding the Covid pandemic related restrictions, thousands of men, women and children gathered at the airport even before Chanu's flight from Delhi touched down at the Imphal airport, around 7 km from the state capital. 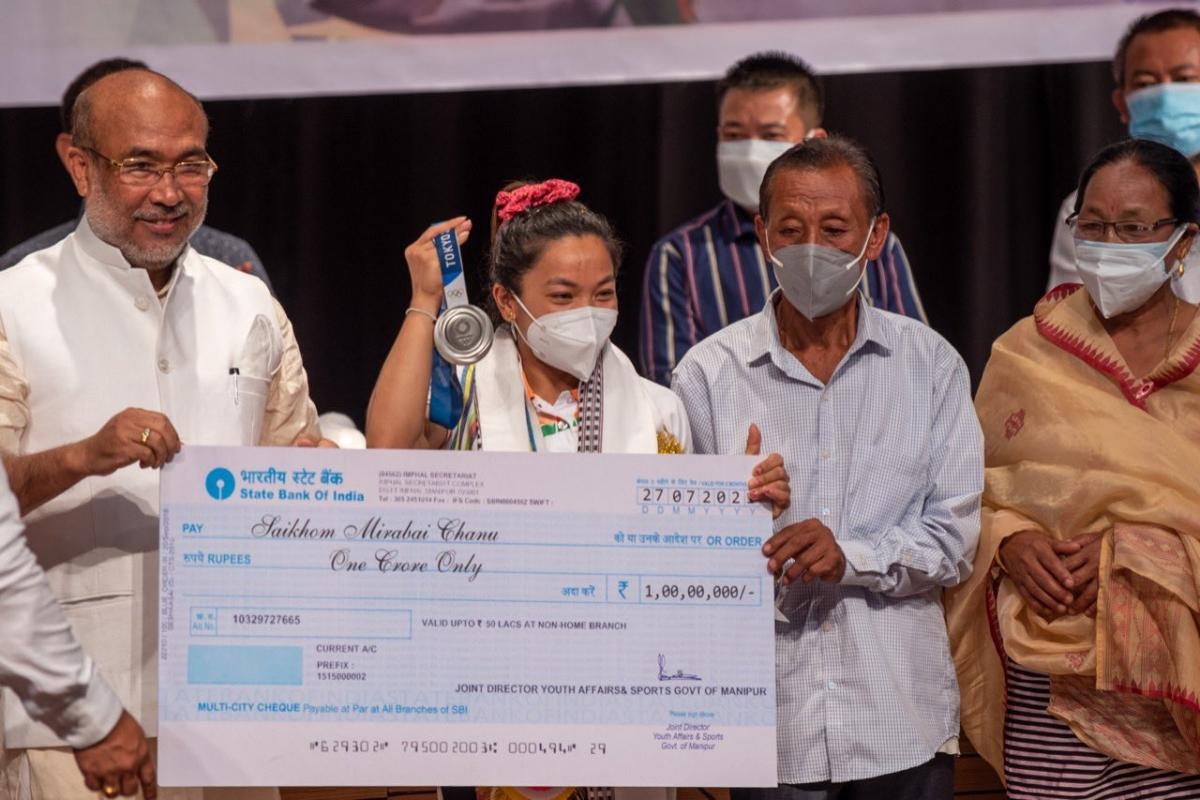 People of all ages carrying flowers and 'Lenjan', a traditional Manipuri greeting cloth, could be seen trying to take selfies with the Manipuri star, giving a tough time to the security personnel present at the airport.

Chanu (26) is a native of Nongpok Kakching village in Imphal East district, around 25 km from Imphal.

From the airport, the star weightlifter went to attend a felicitation event organised by the Manipur government that was hosted by the Chief Minister, who had promoted her to the post of Additional Superintendent of Police (Sports), and on Tuesday, handed over a well-decorated office chamber to Chanu.

After Chanu's triumphant show in Tokyo on Saturday, the Chief Minister had announced a reward of Rs 1 crore for her, besides the promotion to the post of Additional Superintendent of Police (Sports).

In a series of tweets since Saturday, Singh had praised Chanu and termed her as a "golden girl" of India and Manipur.

"We are filled with so much joy to felicitate the 'Pride of our Nation'. Everyone in the state is absolutely delighted to have you back here in Manipur. Your achievement in Tokyo 2020 is no mean feat, and we are so proud of you.

"I'm extremely delighted to hand over the newly furnished office of Additional Superintendent of Police (Sports) to Mirabai Chanu in the presence of her proud parents. I was joined by my cabinet colleagues, MLAs and officials during the handing over ceremony," the Chief Minister said in a tweet on Tuesday.

Chanu's elder brother Binod Meitei informed that the star lifter returned home after two years, as she was busy training in different places across the country. Chanu belongs to a low-income family comprising eight members, most of whom are into farm work.

Chanu's village, Nongpok Kakching, is in a Covid-hit locality and hence the family did not allow too many people to enter their home after she created history in Tokyo, restricting the crowd to close relatives and immediate neighbours.