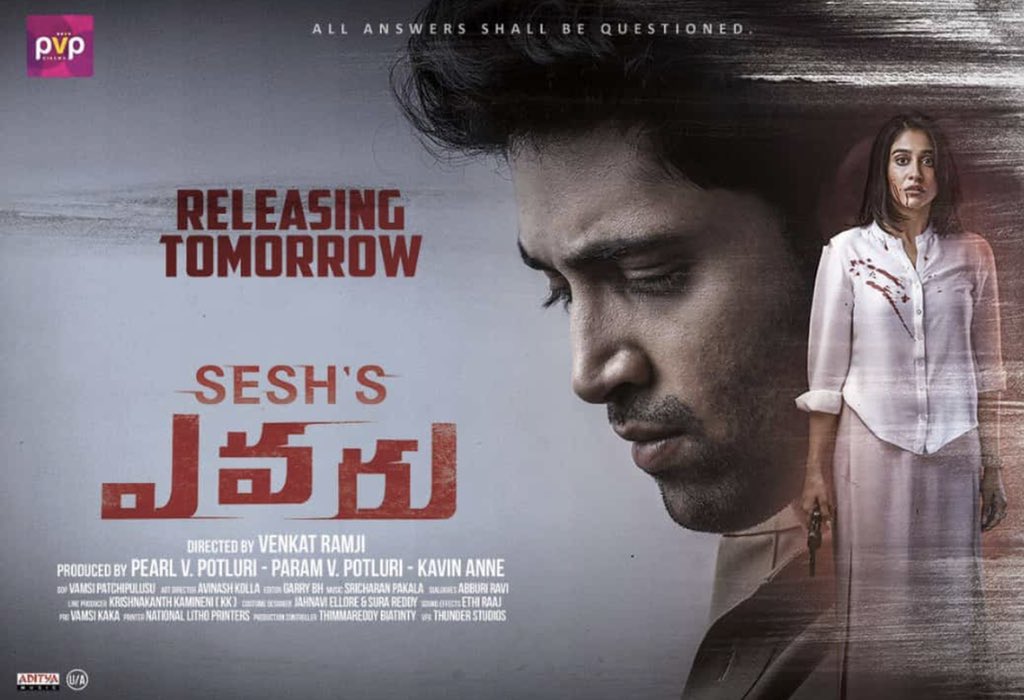 Evaru is a crime thriller drama film and Abburi Ravi has written the script and dialogues for the movie, which has been produced by Pearl V Potluri, Param V Potluri and Kevin Anne under the banner PVP Cinema. The flick has received a U/A certificate from the censor board and its runtime is 1.58 hour.

Evaru movie story: The film is about rape victim Sameera (Regina), who is charged with the murder of top rank police officer Ashok (Naveen Chandra). When her husband does not help her, Sameera decides to deal with the case herself and she shells out big bucks on corrupt cop Vikram (Adivi Sesh) to help her. As he delves deeper, Vikram finds the case spiralling into a dark tale filled with unexpected surprises.

Analysis: Evaru has a brilliant script, which has several twists that keep you engaged and engrossed from beginning to the end. The climax is very interesting, say the audience and celebs.

Performance: Regina Cassandra has a double-edged role and she has given her carer best acting, which is one of the highlights of Evaru. Adivi Sesh has delivered performance and his confrontation scenes with Regina are among the attractions of the film. Naveen Chandra, Murali Sharma and others have also done good jobs, say the viewers and celebs.

Technical: Evaru has brilliant production values and picturisation, background score, action, special effects are the attractions on the technical front, add the audience and celebs.

Evaru movie review live updates: We bring you some celebs and audience's response on the film shared on Twitter. Continue to see their reactions.

Actor Sundeep Kishan: Mr.Goodachari @AdiviSesh how...how I say..and every single time @ReginaCassandra papa this is your best performance to date and you looked @Naveenc212 soo happy for you ra..fab work in the film.. @PVPCinema congrats guys ❤️#Ramji #Evaru

Actor Vennela Kishore: #Evaru ..From beginning to the end it completely took over my mind with its sharp twists. .Engaging n Engrossing..was tuned n glued to the screen not wanting to miss out on what is being presented.. I thought I had it all figured out, but.... @AdiviSesh wala punch

Director Mahi Vraghav: #Evaru is engaging and interesting. Got enough twists to hold for a thriller and the climax has the right emotional touch. Congratulations @PrasadVPotluri @PVPCinema @AdiviSesh @ReginaCassandra

Have watched both #TheInvisibleGuest & #Badla. And liked both of them equally well. #Evaru is another adaptation. Indianizes a bit by adding drama and climax twist is good. It will be liked more by the people who haven't seen the original. A different thriller by Sesh, PVP &team!

#Evaru - For people familiar with the premise of an unreliable narrator, the twists should be easy to read. The film puts its full focus on twists and is void of a solid core, making me indifferent to the proceedings! Regina holds the film together and makes it a decent watch!

All Questions are Well- Answered! #Evaru thrills u with twists & turns.. @AdiviSesh did awesome and @ReginaCassandra was Good. Though it's remake..well made by Dir Ramji,he has done fair job.. Climax twist is interesting.. Let's watch and Thrill..

#Evaru Decent 1st half Engaging - yes Surprising - Not much #Evaru with a superb reveal 2nd half comes to an end. 2nd half starts of well and halfway through the flow starts to fizzle out but then some excellent twists in the end makes up for it. A lot of 'Oh' & some 'wow' moments makes #Evaru AN ENGAGING THRILLER. Go for it...!!!

R a J i V @RajivAluri

#Evaru interesting thriller with twists and nice screenplay @AdiviSesh did a fabulous job and @ReginaCassandra was perfect fit in the role. Director Ramji needs an applause Climax is next (link: http://level.Do) level.Do watch

Mind blowing stuff has been witnessed at the #Evaru screening today. @AdiviSesh Thank you for making us proud with your work. And congratulations on your double hat-trick(including Ami Tumi). @ReginaCassandra you've shown your mettle yet again. Kickass stuff!

#Evaru - An edge of the seat thriller with many twist and turns.Especially the climax. @AdiviSesh did it again.He Surprises everytime with something unique. @ReginaCassandra's bestest performance till date. Well done..@Naveenc212 was fab. Good job by #VenkatRamji

A V A D @avadsays

#Evaru is a must watch for people who love thrillers. The twist itself is worth the money. Riveting stuff #EvaruFromAugust15th

#evaru is a fascinating watch. Gripping and engaging right till the end. Keeps you on the edge of your seat... please watch it to experience good cinema.

#Evaru a good flick with a splendid performances by @AdiviSesh & @ReginaCassandra. Who watched #theinvisibleguest or #Badla may not excite much. Bit change was made and it is sweet.