Delhi election 2020: Close to 55% voter turn out recorded as polling comes to an end

The polling for the 70-member Delhi Assembly has begun this morning, February 8. Over 1.47 crore voters are eligible to exercise their franchise. Polling began at 8 am and will end at 6 pm. 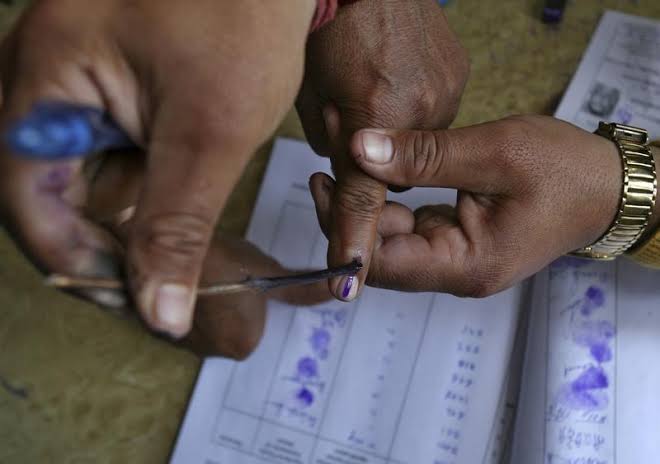 Delhi recorded an estimated 54.97 per cent voter turnout on Saturday with 1.47 crore eligible voters expected to cast their votes in the election for the 70-member Delhi Assembly. This is significantly lower than the 2015 assembly polls when the voter turnout was 67%.

The early hours saw low polling as very few voters chose to brave the early morning chill to cast their franchise even after the polling began at 8 am in bright sunshine amid tight security. There are 672 candidates in the fray to elect a new government.

The early hours saw low polling as very few voters chose to brave the early morning chill to cast their franchise even after the polling began at 8 am in bright sunshine amid tight security. There are 672candidates in the fray to elect a new government.

Delhi had recorded a voter turnout of 67.12 per cent in the last Assembly polls held in 2015.

Kejriwal, who is seeking another term from the New Delhi constituency, cast his vote along with his father, mother and wife at a polling booth in Rajpura Transport Authority in Civil Lines area amid tight security.

Sonia Gandhi, who was discharged from hospital after four days following stomach infection, arrived at a polling booth in central Delhi's Nirman Bhawan.

There was enthusiasm among voters of Neb Sarai, one of Asia's largest unauthorised colonies, as young voters came out in large numbers to exercise their right to choose their representative.

Results will be announced on February 11

The polling will end at 6 pm and the results will be announced on February 11.

In the election, the ruling Aam Aadmi Party (AAP) is making yet another attempt to return to power, while the Bharatiya Janata Party is determined to stage a comeback after 20 years. The Congress, which ruled Delhi for 15 years, is expecting a resurgence in its vote share.

In the last elections, Arvind Kejriwal-led AAP had registered a landslide victory by winning 67 of the 70 seats. The BJP had got three seats and the Congress drew a blank.

The AAP is contesting on all the 70 seats, while the BJP has fielded its candidates on 67 seats and has left three seats for its allies - two for Janata Dal (United) and one for Lok Janshakti Party (LJP).

On the other hand, Congress is contesting on 66 seats and has given four seats to its ally Rashtriya Janata Dal (RJD).

The Election Commission has identified 516 locations and 3,704 polling booths as critical voting stations along with 144 vulnerable polling stations and 102 expenditure sensitive pockets where paramilitary forces have been deployed. Activities at each polling station are being monitored through webcasting.

All the five polling stations in Shaheen Bagh, the epicentre of anti-CAA protests, have been declared "critical" by Delhi's Chief Electoral Officer (CEO).

The police have deployed around 40,000 security personnel, 19,000 home guards and 190 companies of Central Armed Police Forces to ensure smooth conduct of the polls.

Close
US-Taliban Talks
Why advertise with us?
most popular