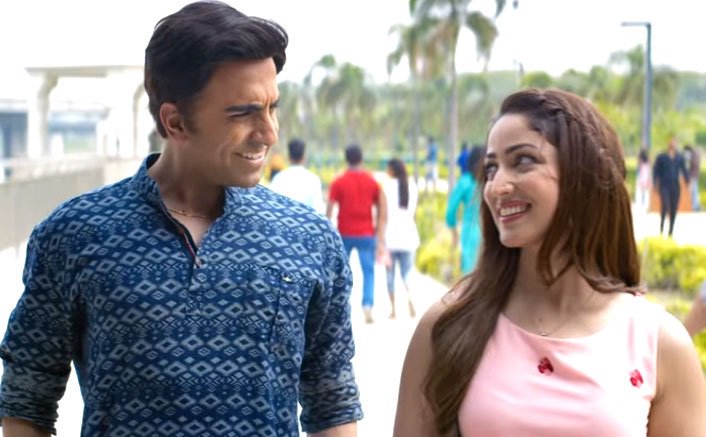 Director Amar Kaushik's Hindi movie Bala featuring Ayushmann Khurana, Yami Gautam and Bhumi Pednekar in the lead roles has received positive reviews and ratings from the audience, who are fallen in love with its amazing script, lead actors' performances and good production values.

Bala is a light-hearted comedy film. Niren Bhatt has written the story, screenplay and dialogues for the movie, which has been produced by Dinesh Vijan under the banners Maddock Films and Jio Studios. The flick has received a U/A certificate from the censor board and its runtime is 2.09 hours.

Bala movie story: It is about a man named Bala (Ayushmann Khurana) who is suffering from alopecia prematurely. How this man living in Kanpur copes with the lack of confidence and societal pressure that comes with balding forms the crux of the story. The film also narrates his relationship with two women (Yami Gautam and Bhumi Pednekar).

Analysis: Bala has an interesting story with a good message to the society and Amar Kaushik has executed it well on screen. The movie has an entertaining and engaging narration, which hardly bores at any point in time, say the audience.

Performance: As usual, Ayushmann Khurana has delivered an amazing performance, which is the highlight of Bala. Yami Gautam and Bhumi Pednekar have done justice to their roles and their chemistry with the hero is one among the attractions of the film. Javed Jaffrey, Saurabh Shukla, Deepika Chikhalia, Seema Pahwa, Abhishek Banerjee, and Harrdy Sandhu have also done good jobs, say the audience.

Technical: Bala has brilliant production values. Sachin-Jigar, Jaani and B Praak's music, Anuj Rakesh Dhawan's cinematography and punch dialogues are the attractions on the technical front, add the viewers.

Bala movie review live updates: We bring you some viewers' response on the film shared on Twitter. Scroll down to see audience's reactions.

#Bala simply outstanding film of this year. @ayushmannk is top notch in every scene when he switch off the characters. Totally nailed it. Specially in the climax scene, he just bang it with best performance. @bhumipednekar marvelous with her role. @yamigautam best of them.

Just watched #bala first half was brilliant and the second half was outright the best... love the movie @ayushmannk you nailed it bhai so so proud of you

#Bala is one of the best Entertainning movie of 2019. Plus its a movie with strong message. @ayushmannk is ace of the movie and What a performance bro.@bhumipednekar & @yamigautam are shining. Direction and Screenplay was good. I'll give star Good luck to the team.

Thoroughly enjoyed #Bala! Is there any role that @ayushmannk can't do?! Such a wholesome entertainer- not a single false note, anywhere! And great performances from the entire cast including @bhumipednekar, @yamigautam #saurabhshukla

Funny and thought-provoking. Not a second that you'd consider dreary. @ayushmannk How do you do it? There must be a magic pill for selecting such scripts @bhumipednekar, @yamigautam, @amarkaushik, @MaddockFilms #DineshVijan - Kudos to the entire team. #Bala #balareview Honestly, I feel like @ayushmannk has created a niche for himself - Thought-provoking, quirky and supremely entertaining. The kind of films we need. @bhumipednekar & @yamigautam, you guys are brilliant. #Bala #balareview @MaddockFilms

Not a single boring moment from Start to the End. Ayushmann is amazing as always but Yami Gautam was a Complete Surprise Package! Another Superhit in Ayushmann's Kitty. Rating: #balareview #Bala

#Bala again confirms @ayushmannk's position as the new superstar of Hindi cinema.But the real surprise is @yamigautam. Where did that come from! Kudos to producer Dinesh Vijan in believing in the working-class hero's power to draw in audiences.The underdog is the new superhero

#Bala what an amazing movie. Superb story, unique concept, very nice message. Saw #BalaMovie n say one words it's a O-U-T-S-T-A-N-D-I-N-G movie. @yamigautam u looking super cute in this movie. What a fabulous acting. I just loved ur performance. U r brilliant actress. Love u.

#balareview is truly winner. A wholesome packet of comedy, Emotions, romance and message. I think @ayushmannk should rename his name as Content Khurrana. 7th continues Hit Movie on the way #Bala

#Bala is a great film with a necessary message. RATING : OUT OF 5* #AyushmannKhurrana did it again with his great performance. #YamiGautam and #BhumiPednekar did a good job. (Must Watch) #BalaReview

Covishield side effects remain minuscule in India; watch out for these signs

Heartbreaking story of an umpire; how it became reason for K Vaitheeswaran to give up on his passion
Advertisement
Must Read
Advertisement