Canada embassy issued a travel advisory for its citizens requesting them to avoid their trip to Arunachal Pradesh, Assam, Manipur, Meghalaya, Mizoram and Nagaland.

After United States, now Canada has asked its citizens to avoid "non-essential travel to the northeast in view of the ongoing protests against the contentious Citizenship Amendment Act. Canada embassy issued a travel advisory on Saturday for its citizens requesting them to avoid their trip to Arunachal Pradesh, Assam, Manipur, Meghalaya, Mizoram and Nagaland.

The embassy has also stated that the internet and mobile communications have been temporarily suspended and transport facilities have also been affected in various parts of the northeast region. People of these states are protesting against the Citizenship Amendment ACT for over a week now. Earlier, the US government also warned its citizens against visiting the northeastern states of India due to the ongoing protests over the Citizenship (Amendment) Act, 2019.

Tens of thousands of protesters against CAB — which has now become a law, have taken to the streets of northeast since Wednesday, clashing with police and plunging the region into chaos.

Meanwhile, Assam continued to be in flames as anti-Citizenship Amendment Bill protesters set ablaze the house of an MLA, torched vehicles and burnt down a circle office as the state government removed two key police officers including the Guwahati Police Commissioner.

The Army conducted flag march in Guwahati, while the authorities extended the suspension of internet services across the state for another 48 hours from 12 noon on Thursday, even as most airlines cancelled flights to and from Dibrugarh and Guwahati, and train movement was halted.

"I assure the people of Assam full protection to ensure their identity as a whole," Sonowal said in a statement here, urging the masses to "please come forward and create a situation of peace and tranquillity. I hope the people will consider this appeal sensibly," he said.

Officials said protesters set fire to the house of MLA Binod Hazarika in Chabua and went on a rampage torching vehicles and the circle office. 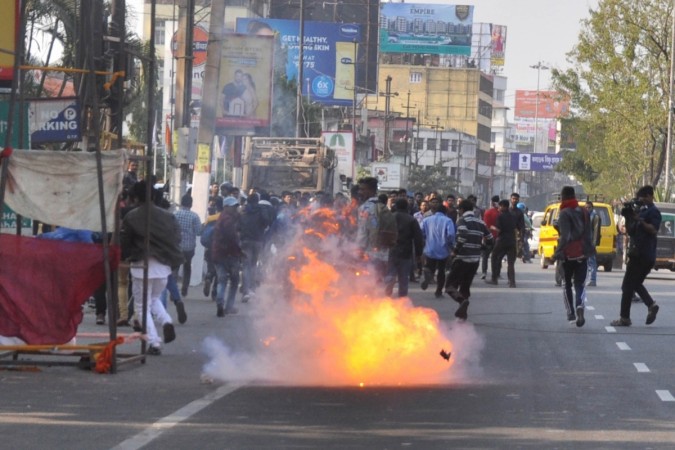 Demonstrators against the Citizenship (Amendment) Bill 2019 that was tabled in the Rajya Sabha.IANSIANS

With the situation worsening, the Army was conducting flag marches in Guwahati where protesters violated the curfew on Thursday morning.

Most flights to and from Guwahati and Dibrugarh have been cancelled by various airlines, while the railways suspended all passenger train services to Assam.

"Indigo Airlines has cancelled one flight to Guwahati from Kolkata. The flights to Dibrugarh are being cancelled by most airlines due to the ongoing protests. However, Indigo will operate a ferry flight to bring back the stranded passengers from Dibrugarh," an NSCBI Airport spokesperson said.

A Northeast Frontier Railway official said the decision to suspend passenger train operations to Assam and Tripura was taken on Wednesday night in view of the security situation.

A large number of passengers were stranded at Guwahati and Kamakhya with the railways' short-terminating long-distance trains at Guwahati.

Meghalaya too was put under lockdown as mobile and internet services were blocked across the state for two days. An indefinite curfew has also been imposed in parts of capital city Shillong.

Mobile phone videos from the region being circulated on the internet show at least two cars on fire and a scramble to shut the town's main shopping street, the Police Bazar. Another video shows a massive torchlight rally being taken out on one of the town's main road.

Young men and women holding banners were filmed shouting 'Conrad go back' in front of the chief minister's convoy.

Close
NCC plane Made emergency landing
Why advertise with us?
most popular