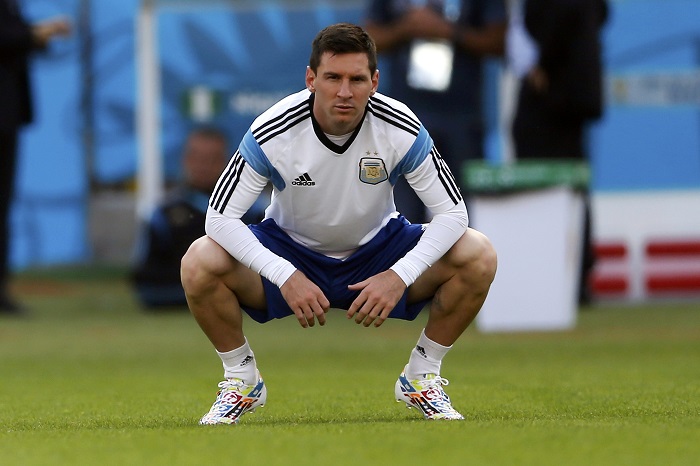 Lionel Messi bailed Argentina out in the most stunning fashion against Iran, scoring an outstanding goal to help them get over the line. With qualification into the round of 16 already secured, thanks to that brilliant strike, Argentina will target top spot when they host Nigeria in their final Group F clash in Porto Alegre on Wednesday.

Get the report HERE

The Group F game is set for a 1 pm local time (9.30 pm IST, 5 pm BST, 12 pm ET) start with live coverage on Sony Six HD and Sony Six in India. The match can also be watched via live streaming online HERE in India. Catch the game in the UK on ITV and BBC with the live streaming option HERE or HERE. Viewers in Argentina and South America can catch the action HERE. US viewers can watch the big game on ESPN and ABC while you can also live stream the action HERE. Australia viewers click HERE to watch the game online, while Africa viewers can live stream it HERE.

Argentina have been quite unimpressive in both of their games so far, but have found a way to win, with Messi scoring the winning goals on both occasions. In their last game against Iran, they ran into a brick wall, and for over 90 minutes it looked like they would not be able to penetrate.

But in stepped that magical left foot of Messi's to ensure all three points and a place in the knockout rounds. "We know we are not playing as well as we are expected," said Messi, who turned 27 on Tuesday. "But as we go along in the tournament, we will be improving and we will reach our full potential."

Topping Group F could be crucial as the second-placed team in Group F are likely to play France, if Didier Deschamps' men, as expected, do the needful in their final game against Ecuador.

While France will not be too keen on facing Argentina either, the way the South Americans are playing at the moment, Messi and co. will definitely prefer either Switzerland or Ecuador in the last 16. To do that, Argentina, who have six points from two matches, two more than Nigeria and five more than Iran, will need to pick up at least a point against the Africans on Wednesday.

"I'm worried in the sense we have to improve," Argentina coach Alejandro Sabella said on Tuesday. "We need to be more mobile, to find spaces and we will see if the match will be different. We are going to meet a team that can play with high potential, switch to attack with ease.

"I see a fast team attacking swiftly. They are strong when they get the ball into attack. It is a team that is very fast and that makes you worry. We have seen some surprises but that doesn't mean we will have one tomorrow."

Nigeria have put themselves in a strong position to qualify after their win over World Cup debutants Bosnia-Herzegovina. With four points already in their kitty, Nigeria could make it to the next round even if they lose to Argentina. But then, they will also be relying on the result in Salvador where Iran face Bosnia-Herzegovina.

A point will definitely take them through, and coach Stephen Keshi will hope Argentina's much-vaunted attack fire blanks again and Messi does not weave his magic one more time.

"Messi is one of the best players in the world and everybody knows it," said Nigeria goalkeeper Vincent Enyeama when asked if he expects the game to be a duel between the Argentine superstar and himself. "But it is not a game between me and him.

"It is going to game between Nigeria and Argentina. Everybody is talking about Messi but there is [Gonzalo] Higuain [Angel] Di Maria there is a whole lot of players. Messi is a genius, Messi is probably one of the greatest players football has every produced but you cannot rule out other players."