Hosts Russia began their FIFA World Cup campaign in emphatic fashion, registering an easy 5-0 victory over minnows Saudi Arabia in a Group A game at the 81,000-seater Luzhniki Stadium here on Thursday. Yuri Gazinskiy (12th minute), Denis Cheryshev (43rd, 90+1), Artem Dzyuba (71st) and Aleksandr Golovin (90+4) scored for the hosts, who enjoyed a near-perfect first day. They overcame the injury suffered by forward Alan Dzagoev in the middle of the first half. But his substitute Cheryshev scored a brace and young Golovin made two assists and a goal to more than make up for Dzagoev's absence. Russia were impressive from the beginning and threatened the Saudis with fierce counter-attacks. Russia employed pressure by earning multiple corners and after one of them was blocked, Russia regained the ball. Aleksandr Golovin fired in a beautiful cross from right to the centre of the box from where Yuri Gazinskiy headed it in at the left post past Abdullah Mayoof to make it 1-0. Credit: (Photo by Anthony Dibon/Icon Sport via Getty Images)
2 of 7

Four minutes later, off another counter-attack, Alan Dzagoev delayed his shot, allowing Mohammed Alburayk to block but the ball deflected before being parried away by Mayoof. Saudi Arabia got their first chance at goal when Mohammed Al Sahlawi's left footed shot from the left side of the box went inches wide. Russia later suffered a big blow as Dzagoev had to leave the field after picking up a hamstring injury. He raced through a counter-attack before holding the back of his left thigh in the 23rd minute. Villarreal midfielder Cheryshev replaced Dzagoev for Russia as the hosts continued their good work. Playing with a strong, disciplined structure with a heavy midfield, Russia controlled the tempo. Credit: (Photo by Ian MacNicol/Getty Images)
Advertisement1
3 of 7 Two minutes from time, Saudi Arabia were caught by a counter-attack again and this time it proved costly. Roman Zobnin led the counter-attack for Russia before passing it on to Cheryshev, who employed a left footed shot from the centre of the box to the top left corner to make it 2-0. After the 2-0 lead, the second half saw less action. While Russia didn't need to up the ante, they managed to contain the Saudis. The Saudi team continued to concede possession to the hosts, unable to push their way up the pitch and create any meaningful opportunities. At the beginning of the second half, Aleksandr Samedov's right footed shot from outside the box was close, missing out on the top left corner. Credit: (Xinhua/Xu Zijian via Getty Images)
4 of 7 Russia got their third goal from Dzyuba, who scored in the 71st minute, one minute after coming as a substitute for Fedor Smolov. Golovin made his second assist of the game as his cross from right saw Dzyuba outjump Saudi captain Osama Hawsawi and head it in. Russia didn't relent and got their fourth goal in the injury time as Cheryshev got his second of the day. A long ball from the defence was brought down by Golovin before Cheryshev got inside the box before finishing with a chip with his outside of his left foot in the first minute of the second-half injury time. Credit: (Photo by Ian MacNicol/Getty Images)
5 of 7 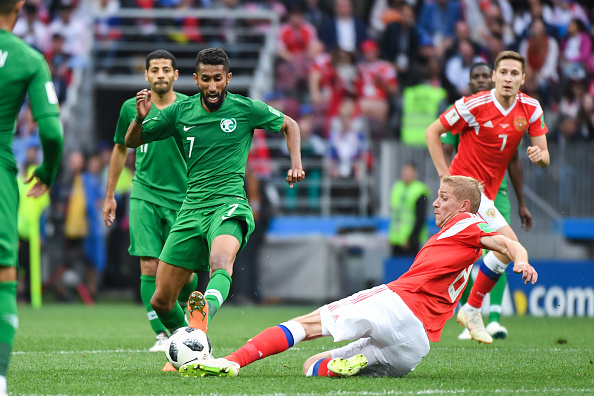 A couple of minutes later, Golovin fired a sumptuous free-kick to the right post from just outside of the box to make it a overwhelming 5-0 victory. Credit: (Photo by Anthony Dibon/Icon Sport via Getty Images)
6 of 7 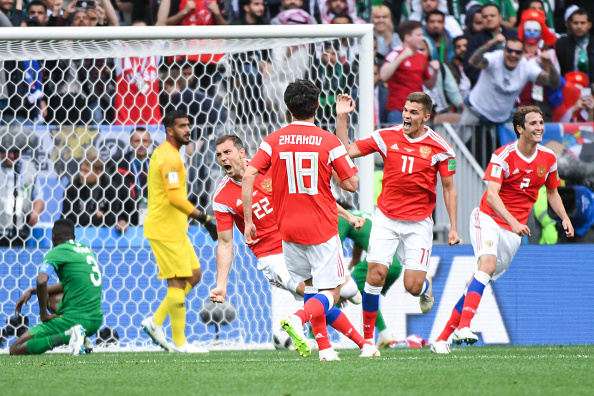 Artem Dzyuba of Russia celebrates his goal during the 2018 FIFA World Cup Russia group A match between Russia and Saudi Arabia at Luzhniki Stadium on June 14, 2018 in Moscow, Russia. Credit: (Photo by Anthony Dibon/Icon Sport via Getty Images)
7 of 7 Football fans cheer ahead of the opener of the football World Cup finals between Russia and Saudi Arabia at Luzhniki Stadium in Moscow on June 14, 2018. Credit: (Photo by Kyodo News via Getty Images)
Advertisement
Related Articles