ice President Mike Pence laughs as U.S. President Donald Trump holds a baseball bat as they attend a Made in America product showcase event at the White House in Washington, U.S., July 17, 2017. Carlos Barria: "This summer the White House organized an event to showcase 'Made in America' products. All kinds of exhibitors brought their products as the President and Vice President toured the event. One of the companies was Marucci Sport, a manufacturer of baseball bats based in Baton Rouge, Louisiana. As Trump approached a table full of baseball bats, photographers at the event, including me, rushed to get a good angle hoping that he would pick up a bat. As we predicted, he did. He took one and joked around as though he was hitting something hard. The only thing closer to him right there, was the media." Credit: Reuters
2 of 5

U.S. President Donald Trump meets with Russian President Vladimir Putin during their bilateral meeting at the G20 summit in Hamburg, Germany, July 7, 2017. Carlos Barria: "On July 7, I witnessed one of the most important meetings of President Trump's first year in office. Trump met Russian President Vladimir Putin during a bilateral meeting at the G20 summit in Germany. The world's eyes were on these two leaders after speculation about Russian interference during the 2016 US elections. We entered the room for less than two minutes, where I took dozens of pictures. But there was this very interesting moment when Trump extended his hand to Putin for a handshake. Putin paused for a second and looked at Trump's hand. That was the picture that I was looking for, a little moment that seemed to say a lot." Credit: Reuters
Advertisement1
3 of 5 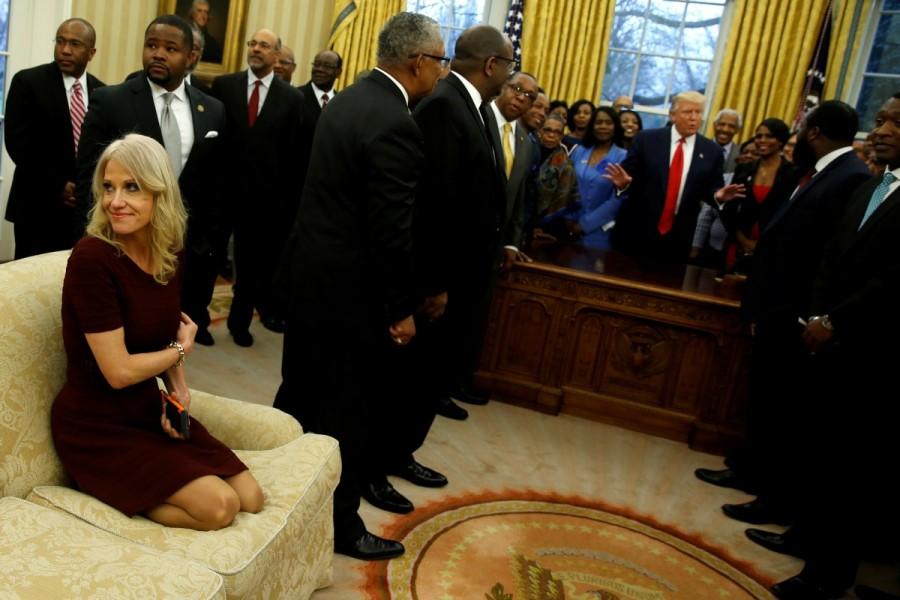 Senior advisor Kellyanne Conway (L) attends as U.S. President Donald Trump (behind desk) welcomes the leaders of dozens of historically black colleges and universities (HBCU) in the Oval Office at the White House in Washington, U.S., February 27, 2017. Jonathan Ernst: "We're often asked how much access we have to the Trump administration, and the answer is we have an awful lot. President Trump himself is very comfortable in the spotlight, and his aides are similarly unfazed by cameras. In this instance, senior advisor Kellyanne Conway was so comfortable in our presence she seemed not to consider the optics of kneeling on a Oval Office sofa to take pictures with her phone. Credit: Reuters
4 of 5 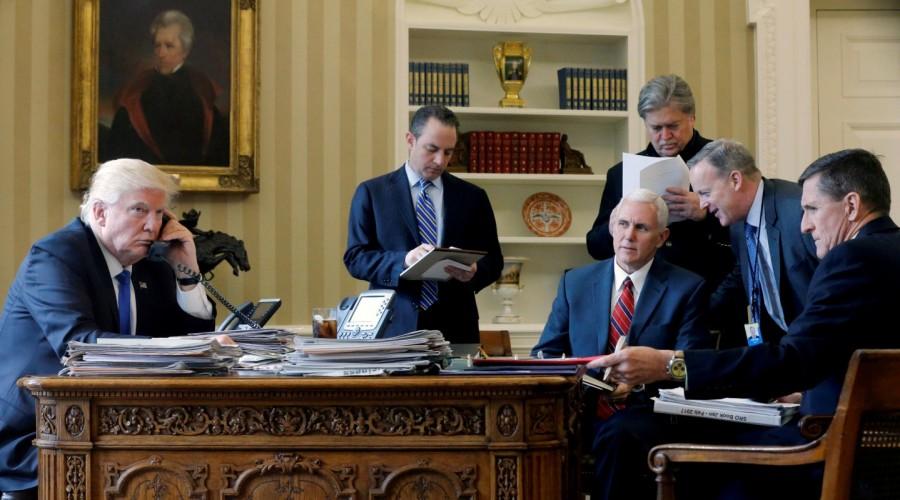 U.S. President Donald Trump (L-R), is joined by Chief of Staff Reince Priebus, Vice President Mike Pence, senior advisor Steve Bannon, Communications Director Sean Spicer and National Security Advisor Michael Flynn, as he speaks by phone with Russia's President Vladimir Putin in the Oval Office at the White House in Washington, U.S., January 28, 2017. Jonathan Ernst: "Very early in the Trump administration, weekends were as busy as weekdays. On Trump's second Saturday the official schedule said he would be making private phone calls to a number of world leaders including Russia's Vladimir Putin. I arrived early and, before sitting down at my desk walked up to Press Secretary Sean Spicer's office. He, too, was just taking his coat off. I gingerly made the suggestion that previous administrations had sometimes allowed photos of such phone calls through the Oval Office windows on the colonnade. To my mild shock, he didn't even think about it twice. "We'll do it!" he said. In truth, I really only expected the Putin call, but we were outside the windows multiple times throughout the day as the calls went on." Credit: Reuters
5 of 5 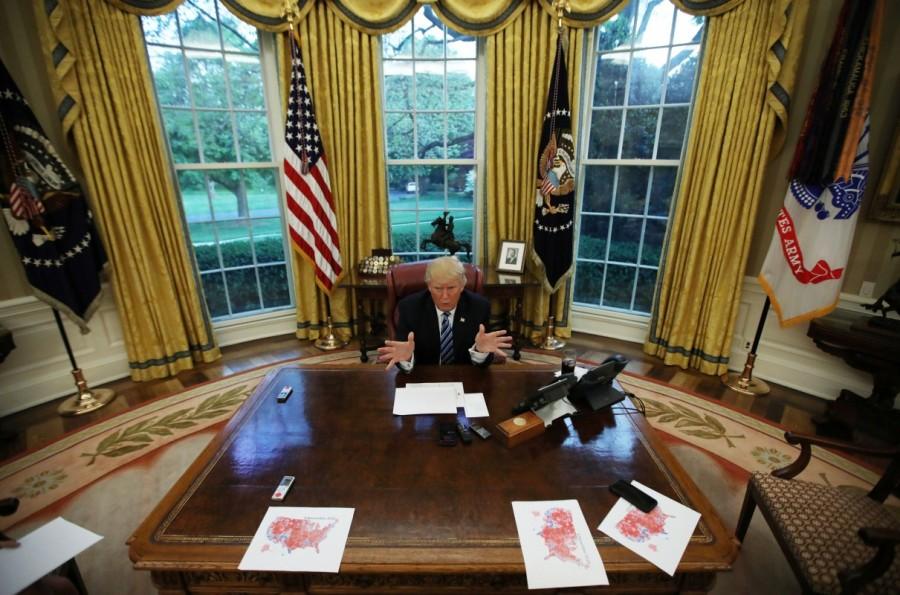 U.S. President Donald Trump speaks during an interview with Reuters in the Oval Office of the White House in Washington, U.S., April 27, 2017. Carlos Barria: "A day before President Trump's hundred days in office I was part of the team that interviewed the commander-in-chief in the Oval Office. I was only allowed to photograph Trump during the last five minutes of the interview. The time was very tight so I had to move fast as I had pictures in mind that I wanted to shoot. I walked into the Oval Office and saw that the President had printed maps of the country showing areas in red where he won. I raised my hands holding my camera as high as possible to get the best view of the scene using a 16mm wide angle lens." Credit: Reuters
Advertisement
Related Articles