Skipper Dinesh Karthik (52) led from the front as Andre Russell (49 not out), Piyush Chawla (2/24) and Kuldeep Yadav (1/18) starred with bat and ball to help Kolkata Knight Riders (KKR) see off Rajasthan Royals (RR) by 25 runs and reach Qualifier 2 of the Indian Premier League (IPL) here on Wednesday. KKR will now meet Sunrisers Hyderabad (SRH) here on Friday to decide who faces Chennai Super Kings (CSK) in the final on Sunday. Despite early hiccups, KKR posted 169/7 in 20 overs riding Russell's big hitting late on after Karthik had set the tone for the two-time champions at the Eden Gardens here. In reply, Royals could manage 144/4 even after Sanju Samson's belligerent 38-ball 50, containing four fours and two sixes and captain Ajinkya Rahane (46; 41b 4x4 1x6) kept their team in the hunt with a 62-run partnership off 54 balls for the second wicket. With 74 needed from 48 balls, chinaman Kuldeep got rid of Rahane in the 15th over with Chawla then sending Samson back after he brought up his half century in 37 balls. With the required run rate climbing up and set batsmen out, Royals, who have a thin middle order, could never recover. Credit: IANS
2 of 7

Rahul Tripathi (20; 13b; 1x4, 2x6) helped Royals to a brisk start by tonking Russell (0/22) for a six in the first over and thereafter smacking the usually economical Sunil Narine (0/39) for two back-to-back sixes in the fifth over. Rahane looked in effervescent touch at the other end, pulling and cutting M. Prasidh Krishna flawlessly in the fourth over after surviving a review when he was given out lbw by the umpire off Chawla on 14, two overs earlier. Royals were 47/0 inside five overs before Tripathi -- who also survived a review -- inexplicably chipped a googly back to Chawla for a soft dismissal. Credit: IANS
Advertisement1
3 of 7 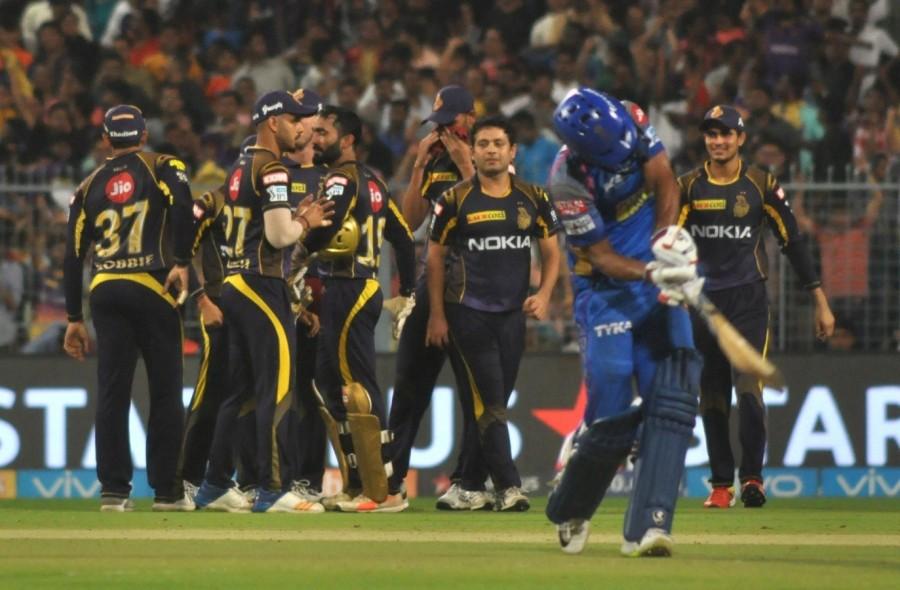 In came Samson with the well-set Rahane batting and the duo looked on course to chase down 170 before they got out in quick succession and it was all downhill from there on. Earlier, KKR rode on Karthik's well-paced fifty coupled with Russell's unbeaten 25-ball 49 blitz to recover from an early collapse. Russell came in to bat when KKR were trying to stem the rot through Karthik and Shubman Gill (28; 17b; 3x4 1x6) before the latter fell with the team on 106/5 in 14.2 overs. Credit: IANS
4 of 7 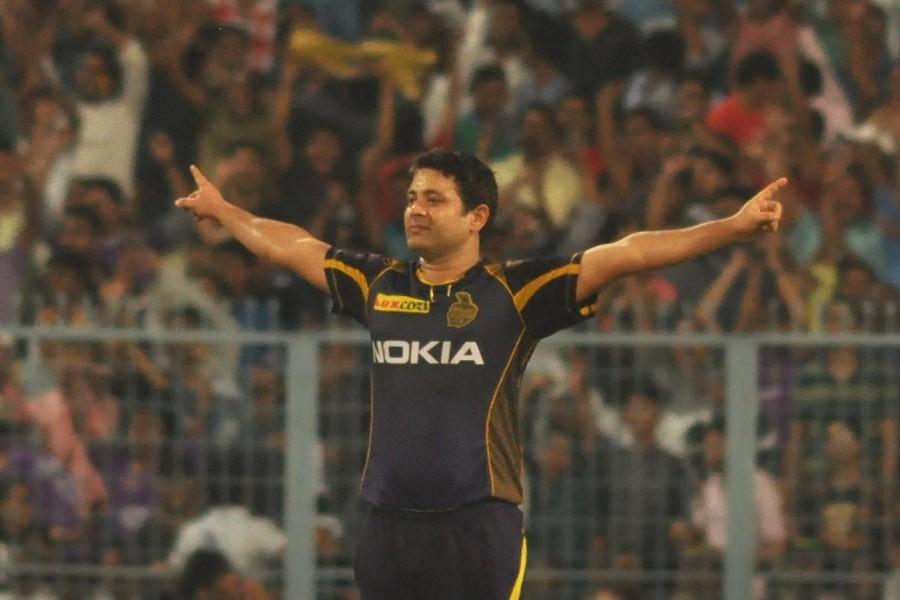 The big-hitting West Indian smoked five sixes and three fours in the last five overs to take 55 runs and help the purple brigade post a challenging score. Krishnappa Gowtham (2/15), Jofra Archer (2/33) and Ben Laughlin (2/35) got two wickets each for the Rahane-led side with leg-spinner Ish Sodhi conceding just 15 runs off his four overs. Credit: IANS
5 of 7 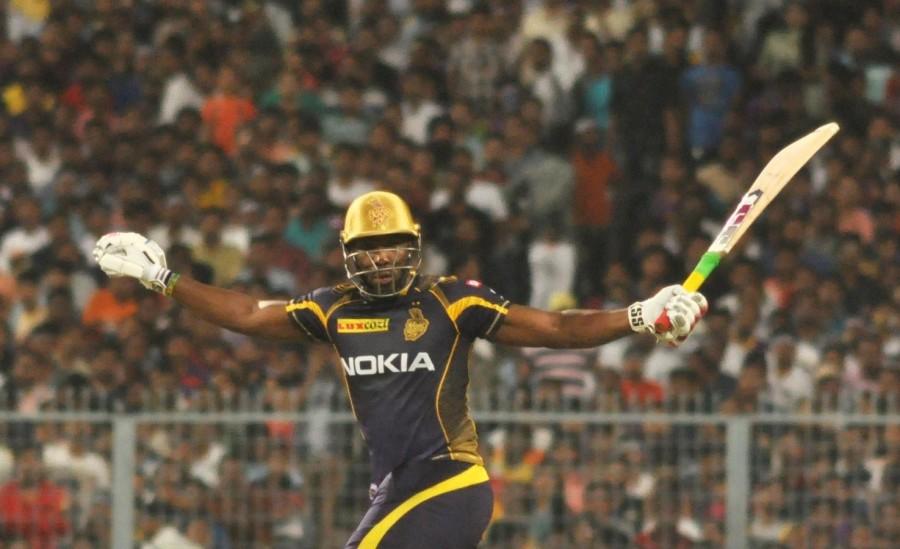 Royals' bowlers made early inroads to reduce KKR to 51/4 after eight overs when Karthik and Gill got together. Credit: IANS
6 of 7 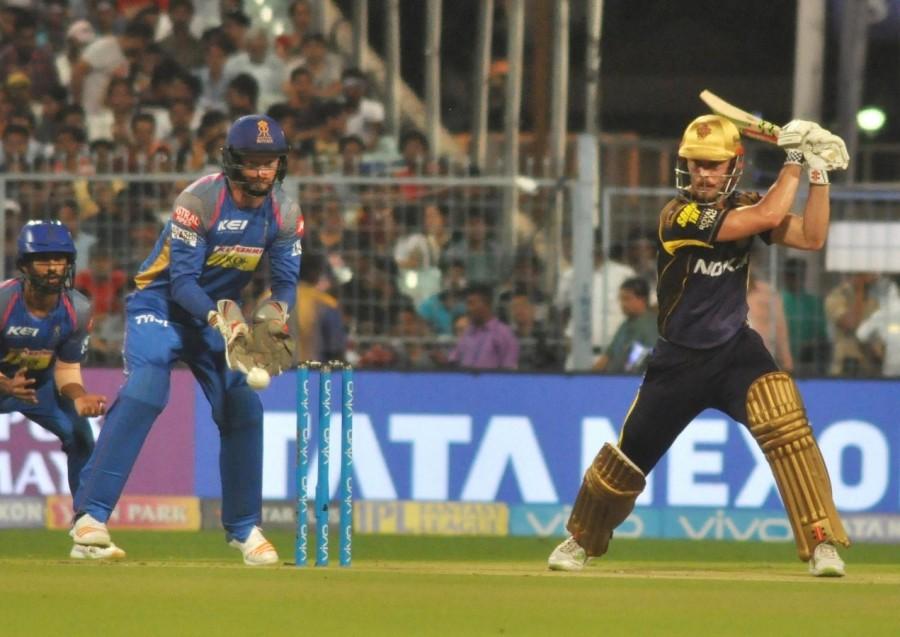 The pair joined hands for a 55-run stand for the fifth wicket before Gill departed and Russell stepped on the gas. Credit: IANS
7 of 7 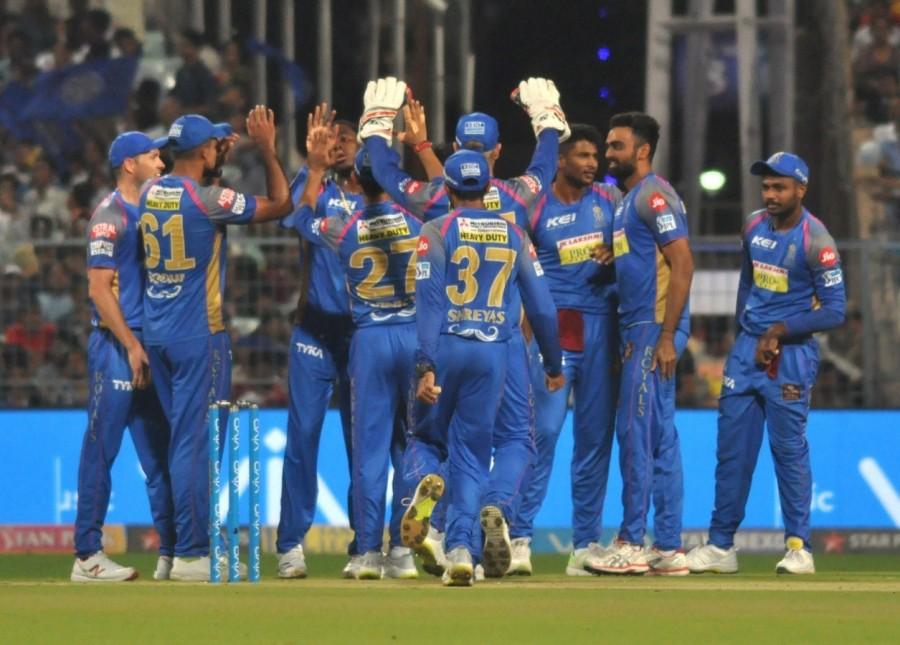 IPL 2022: RCB vs RR live-stream, squad, timings and everything you need to know about today's match

Don't look at his age, he is fit: Sunil Gavaskar on Dinesh Karthik's possibilities of being in squad for T20 WC
Advertisement
Latest Gallery