An impressive show by Rajasthan Royals' bowlers kept the side alive in the Indian Premier League (IPL) as they defeated Kings XI Punjab (KXIP) by 15 runs at the Sawai Mansingh Stadium here on Tuesday. It was the host's bowlers, who helped their side defend a moderate 158 run total against the third-placed Punjab side. Despite hunting a chaseable total, seven of the Punjab batsman didn't even touched the double digits and it was only their opener Lokesh Rahul, who single handedly fought till the last ball of the match, slamming an unbeaten 95 off 70 balls, laced with 11 fours and couple of sixes. Chasing the target, Punjab were off to a poor start as off-spinner Krishnappa Gowtham struck twice in the second over to pack back a dangerous Chris Gayle (1) and skipper Ravichandran Ashwin (0) with the visitors managing to reach just 14 runs. Credit: IANS
2 of 6

Punjab's situation worsened further as Jofra Archer dismissed an in-form Karun Nair (3) to leave the visitors reeling at 17/4. Akshdeep Nath (9) then joined Rahul to add 26 runs for the fourth wicket, taking Punjab to 45 runs. However, just when the combination was settling, Ish Sodhi struck to make the damage bigger after sending back Akshdeep in the ninth over. Manoj Tiwary and Rahul then tried to repair the damage but once again their effort went in vain as Tiwary gave an easy catch to Ajinkya Rahane off a Ben Stokes delivery in the 12th over. Despite wickets falling at regular intervals, Rahul kept one end secured but lacked support from others. Credit: IANS
Advertisement1
3 of 6 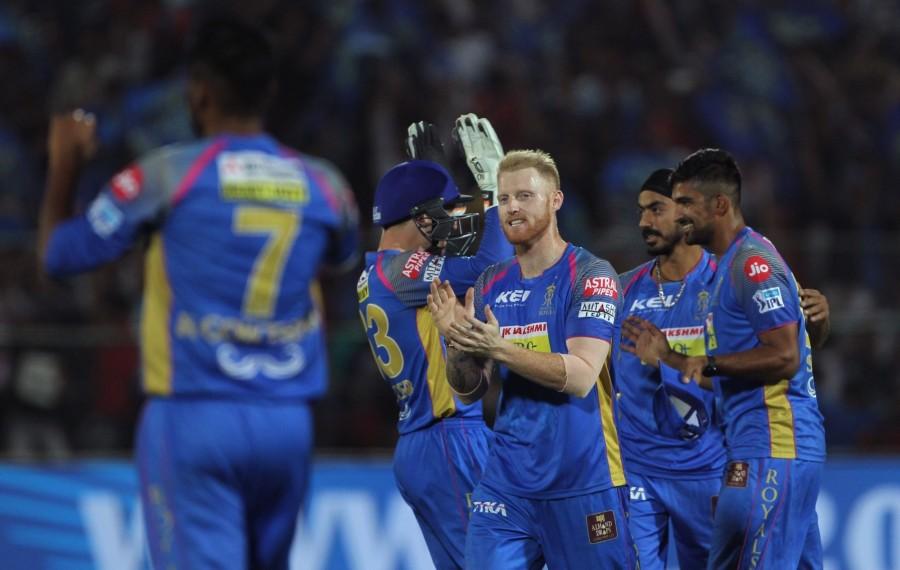 Incoming batter Axar Patel (9) too, failed to show some fight and departed in the 14th over after adding 15 runs with the opener to take his side to 81 runs. Meanwhile, Rahul bought up his fourth fifty of the season in the same over. With the issue going final over with Punjab needing 32 runs, Marcus Stoinis (11) departed while trying to go for the maximum off a Jaydev Unadkat over. Rahul tried his best to to take his side home, smashing 14 runs of the final over, which was however, not good enough as the visitors could only manage to reach 143 runs losing seven wickets. For the hosts, Gowtham emerged with impressive figures of 2/12 off his three overs while Archer, Unadkat, Stokes and Sodhi bagged a wicket each. Credit: IANS
4 of 6 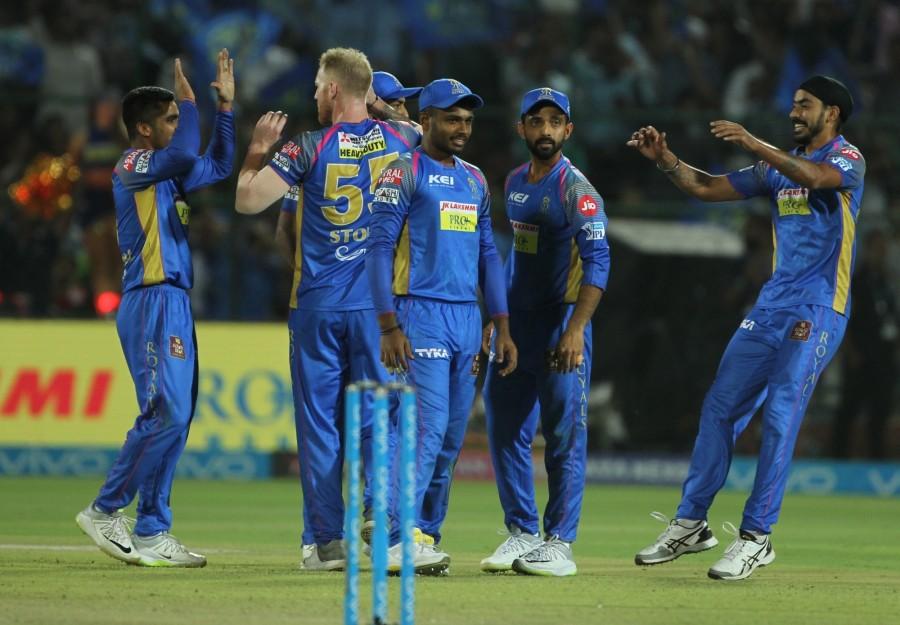 Earlier, Punjab's Andrew Tye (4/34) came with a clinical bowling show to restrict Rajasthan Royals to 158/8. Rajasthan would not have even crossed the 100-run mark but thanks to a blistering 58-ball 82 by opener Jos Buttler that propelled the hosts to a moderate total. Opting to bat, Rajasthan were off to a quick start, accumulating 35 runs in the first three overs. Tye drew the first blood for Punjab as his knuckle ball played the trick to dismiss opener Rahane (9) in the fourth over. Buttler however, continued to fully utilise the powerplay to take his side past the 50-run mark in five overs. Credit: IANS
5 of 6 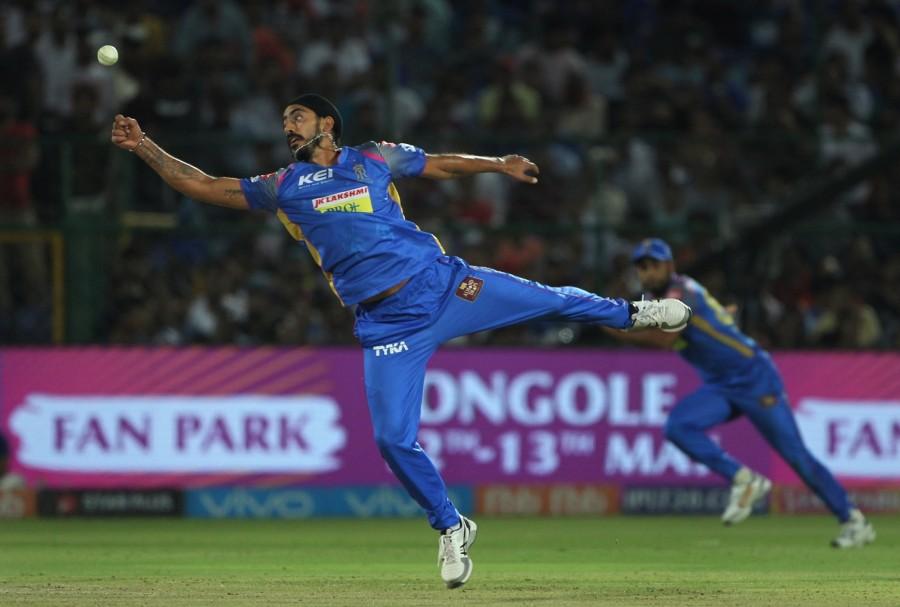 Stoinis gave the second blow to the hosts when Gowtham (8) misread a slower delivery and gave an easy catch to Manoj Tiwary at long on in the seventh over. With two wickets down, in-form Sanju Samson (22) joined Butler to forge a 53-run partnership for the third wicket, but departed in the 15th over off a Mujeeb ur Rahman delivery with the Rajasthan scorecard reading 117/3. Buttler was then accompanied by Stokes (14) and the duo shared a 15-run partnership for the fourth wicket. Mujeeb struck again in the 17th over to pack back a good looking Buttler, whose knock was laced with nine boundaries and a six. Credit: IANS
6 of 6 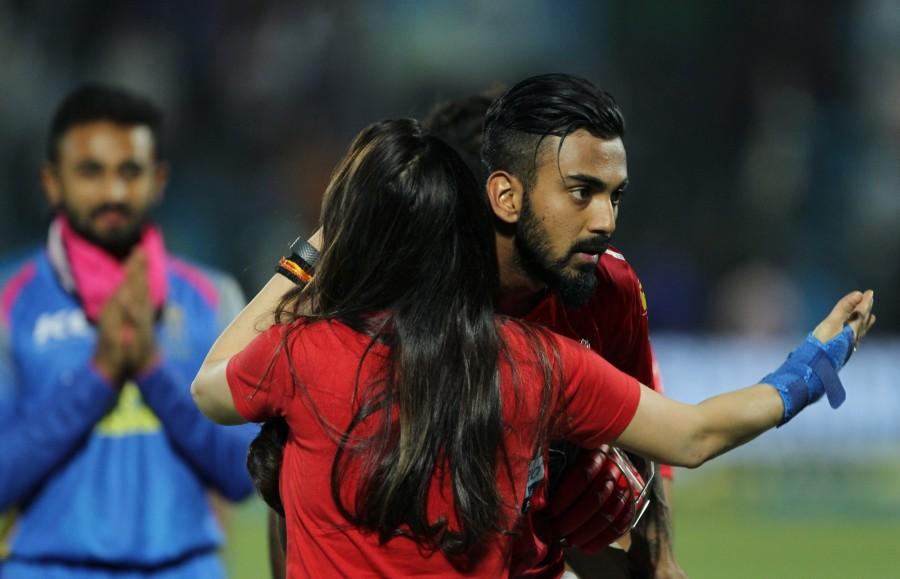