Afghanistan spinner Rashid Khan starred with bat and ball to help Sunrisers Hyderabad (SRH) fix a date with Chennai Super Kings (CSK) in Sunday's final after beating Kolkata Knight Riders (KKR) by 13 runs in the Indian Premier League (IPL) Qualifier 2 at the Eden Gardens here on Friday. Sunrisers will take on CSK in the summit clash at the Wankhede Stadium in Mumbai on Sunday. Chasing 175 for victory, KKR were blown away by Rashid's brilliance before Shubman Gill (30; 20b; 2x4, 1x6) batted brilliantly to take the game till the last over when 19 runs were needed off six balls. Shivam Mavi (6) hit a four off Carlos Brathwaite before picking out Rashid at deep midwicket. In the next ball, Rashid was in the thick of things again, taking Gill's catch to end their fight as KKR finished on 161/9 in 20 overs. Rashid first smashed a whirlwind 10-ball 34 to pull Sunrisers out of a hole and propel them to 174/7 before returning spectacular figures of 3/19 in four overs as the Kane Williamson-led franchise made their second IPL final. Rashid gave away just three runs in the first over and accounted for Robin Uthappa (2) in the very first ball of his second over. The 19-year old then trapped KKR's highest scorer Chris Lynn (48; 31b; 6x4, 2x6) in front to reduce the purple brigade to 108/5 from 93/2 in 10 overs. In his last over, Rashid outfoxed Andre Russell (3) with a superb googly which the batsman tried to cut but ended up giving Shikhar Dhawan an easy catch at slip. Credit: IANS
2 of 6

With the ever-dependable captain Dinesh Karthik (8) also dismissed earlier by Shakib Al Hasan (1/16), Gill gave KKR some hope. Sunil Narine gave KKR a flying start, taking Bhuvneshwar Kumar for three boundaries and a six off his first four balls in the third over. The West Indian holed out to Carlos Brathwaite (2/16) at mid on off Sidharth Kaul 2/32) in the next over but Nitish Rana continued the big hitting by tonking Khaleel Ahmed for two sixes over third man and fine leg as KKR raced to 67/1 in six overs. A timely run out broke the 47-run second wicket partnership with Rashid and Wriddhiman Saha combining to send Rana (22; 16b; 1x4, 2x6) back in the hut. KKR were 93/2 at the halfway stage, well on course to gun down the target but Uthappa threw away his wicket to keep their fate in the balance. The vice-captain attempted an audacious reverse sweep off Rashid only see his leg stump flattened. Credit: IANS
Advertisement1
3 of 6 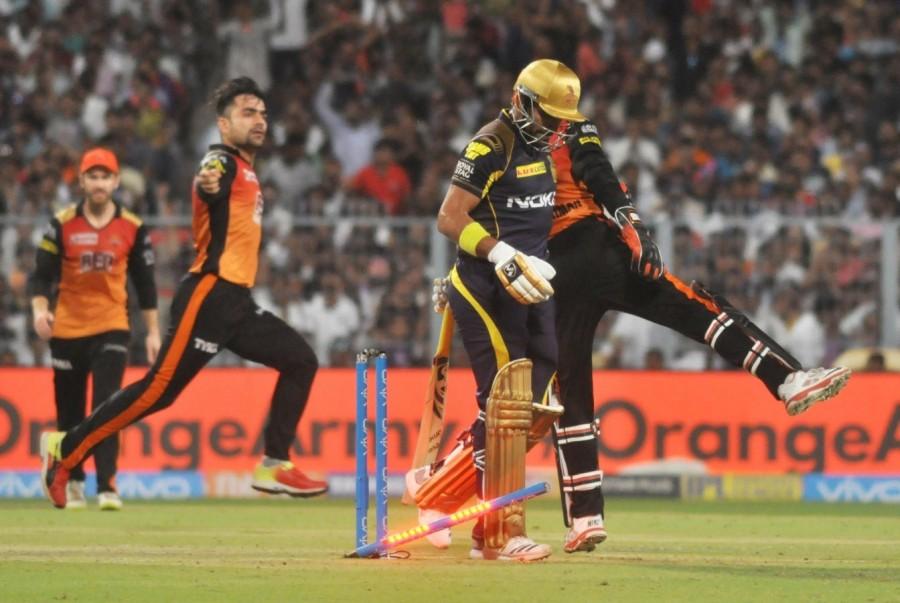 In the form of his life, law of averages caught up with skipper Karthik (8) when Shakib castled him with a beautiful delivery that skidded through the surface and cramped him for room. Lynn departed in the next over followed by Russell with Gill hitting a few gorgeous shots but it was too little too late. Earlier, Rashid blunted chinaman Kuldeep Yadav's two crucial wickets in one over with a superb cameo. Credit: IANS
4 of 6 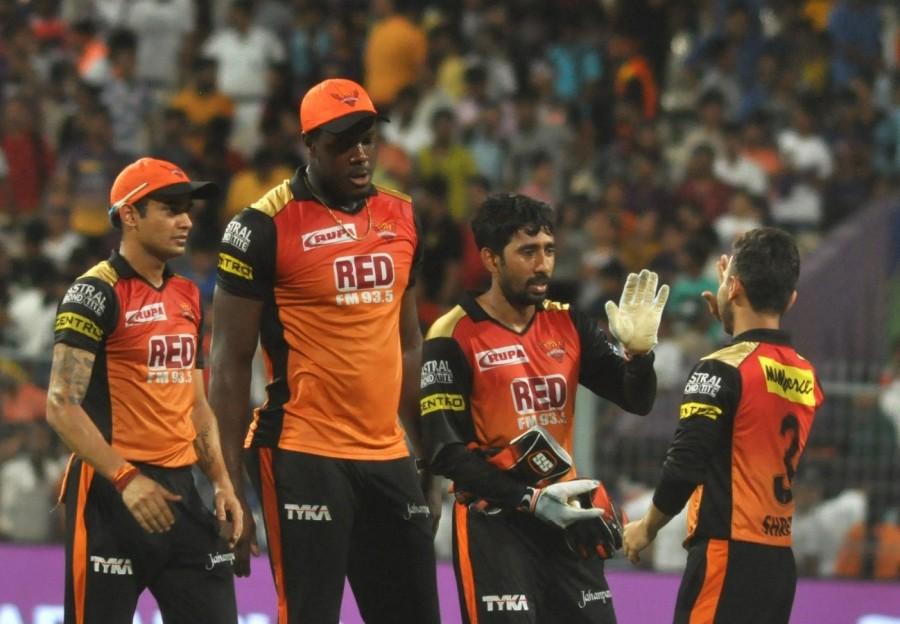 Coming in to bat when Sunrisers were still below par on 134/6, Afghanistan's Rashid smoked two fours and four sixes to stitch together a 36-run unbroken eighth wicket stand off 11 balls with Bhuvneshwar (5 not out) as 50 runs came in the final three overs. In the last over, Prasidh Krishna (0/56) conceded 24 runs with Rashid hitting a four and two sixes, his second one an exquisite flick over deep backward square leg. Kuldeep had previously removed in-form batsmen Dhawan (34; 24b; 4x4, 1x6) and captain Williamson (3) to expose Sunrisers' weak middle order as the visitors clawed to 79/2 in 10 overs. Credit: IANS
5 of 6 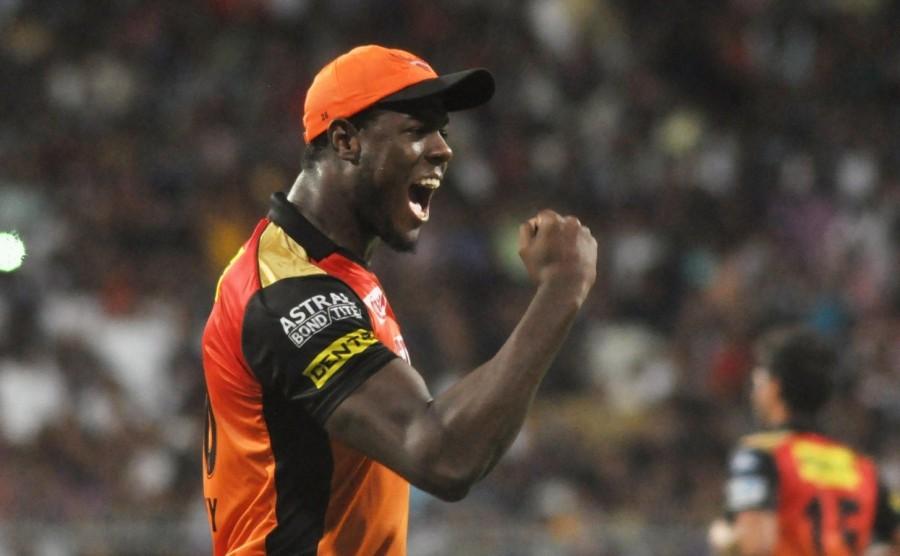 The left-arm spinner was then involved in a run out off his own bowling to get rid of Al Hasan (28; 24b; 4x4) -- playing in place of Manish Pandey -- in the 16th over to further dent Sunrisers' endeavour. Mystery spinner Sunil Narine (1/24) and leggie Piyush Chawla (1/22) were also good in the middle overs to throw a spanner in the works of their rivals. The league leaders could never recover from there in the final few overs, until Rashid came to the party. Credit: IANS
6 of 6 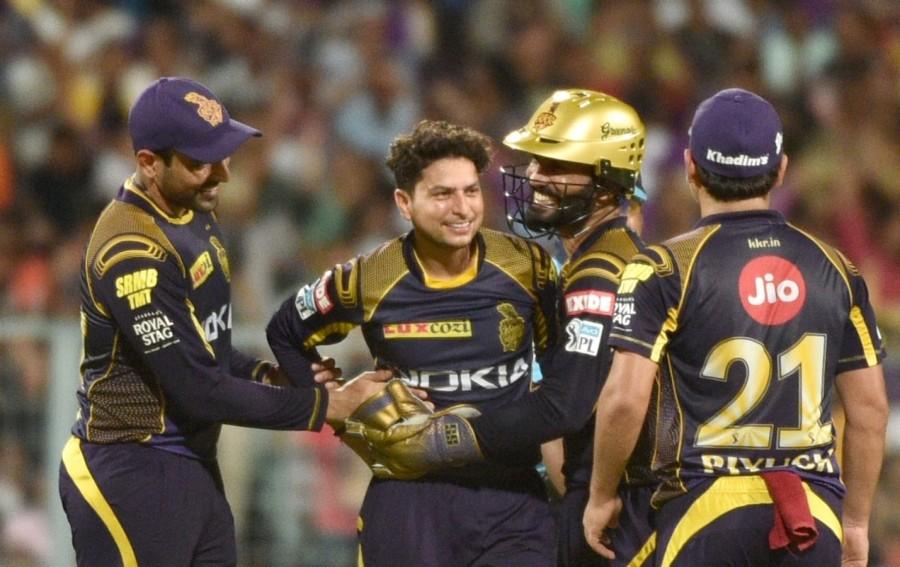