Kolkata Knight Riders (KKR) sharpened their chances of a playoff berth with a convincing six-wicket win over Rajasthan Royals (RR) in a crucial Indian Premier League (IPL) clash at the Eden Gardens here on Tuesday. Chinaman Kuldeep Yadav (4/20) starred for the two-time champions as Royals were bowled out for 142 in 19 overs despite an early blitz from the visiting team openers. Chasing a modest target, KKR rode Chris Lynn's 45 (42b; 5x4, 1x6) and captain Dinesh Karthik's unbeaten 41 (31b, 4x5, 1x6) to ease past the line by posting 145/4 with two overs to spare. The men in purple, thus, stretched their winning run to two games while Royals lost for the first time in four matches. Credit: IANS
2 of 7

KKR (14 points from 13 games), who moved to third spot, will now need to win their last engagement with already-qualified Sunrisers Hyderabad on May 19 to secure a knockout slot. Royals (fourth spot, 12 points from 13 games), meanwhile, will have to depend on other results and triumph against resurgent Royal Challengers Bangalore led by Virat Kohli the same day. KKR showed their intent from the word go with Sunil Narine (7b; 21, 2x4, 2x6) taking off-spinner K. Gowtham for 21 runs that included 6-4-6-4 in the first four balls. Credit: IANS
Advertisement1
3 of 7 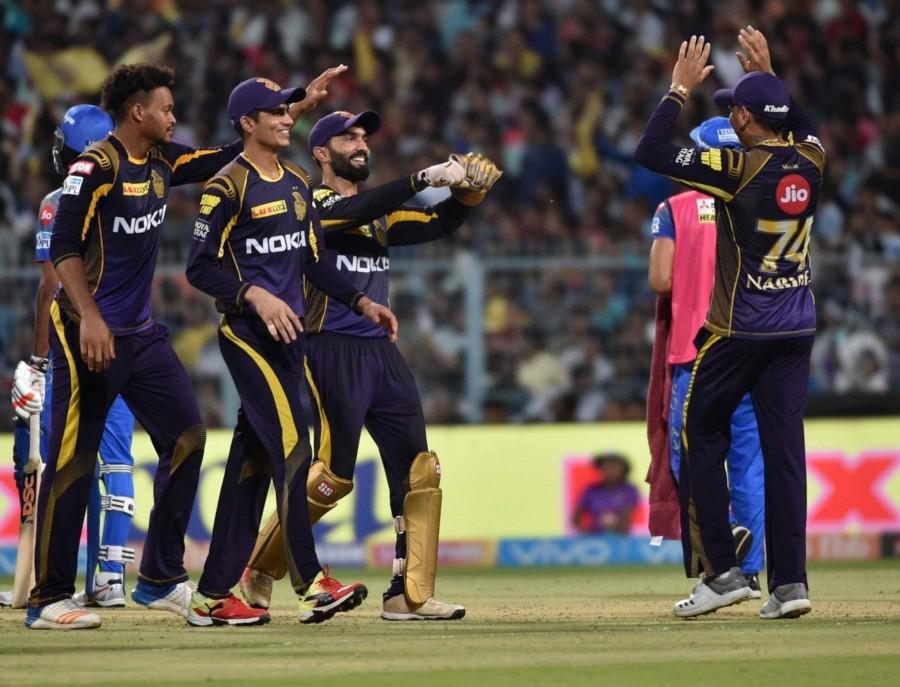 The mystery spinner-turned opener was dismissed by Royals' best bowler Ben Stokes (3/15) in the next over but that hardly made a difference. Lynn first joined hands with Nitish Rana (17b; 21, 2x4, 1x6)) for a 33-run third wicket stand and combined with Karthik for a 48-run partnership for the fourth wicket before Stokes got his back. Karthik, in the company of Andre Russell 11 not out), finished the job with minimum fuss. Earlier, in-form English wicketkeeper-batsman Jos Buttler (22 balls; 39, 5x4, 2x6) and Maharashtra's Rahul Tripathi (15b; 27, 4x4, 1x6) toyed with the KKR pacers to race to 49/0 after three overs before Russell (2/13) got the wicket of Tripathi and it was all downhill from there on. Credit: IANS
4 of 7 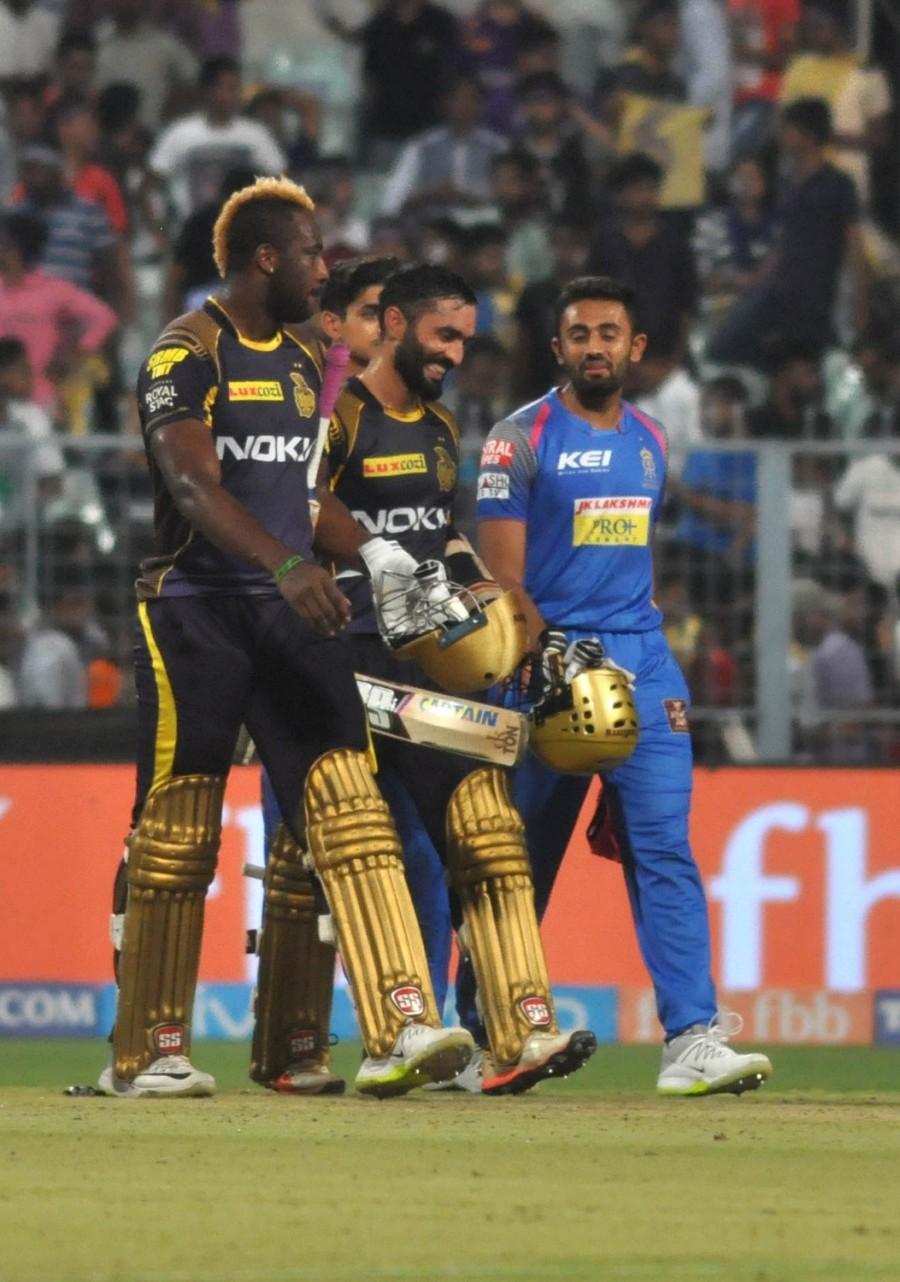 Kuldeep (4/20) saw off skipper Ajinkya Rahane (11), Buttler, Stuart Binny (1), and Ben Stokes (11) to rack up his best figures of the season as Royals' batters paid the price for poor shot selection. The visitors got off to a dream start with Tripathi and Buttler taking Prasidh Krishna (2/35) and Shivam Mavi (1/44) to the cleaners. While Tripathi hit Krishna for a six and a hat-trick of fours, Buttler smashed Mavi to plunder 28 runs in the third over. Tripathi was dropped off the first ball of the match by Rana at wide slip-off Mavi, who leaked only two runs in the opening over. Credit: IANS
5 of 7 Mavi's second over over was the season's joint-most expensive one, with the U-19 World Cup winning pacer conceding 28 against Shreyas Iyer versus Delhi Daredevils as well. KKR bled 46 runs in 10 balls as the pair brought up their 50-run stand in 20 balls. Credit: IANS
6 of 7 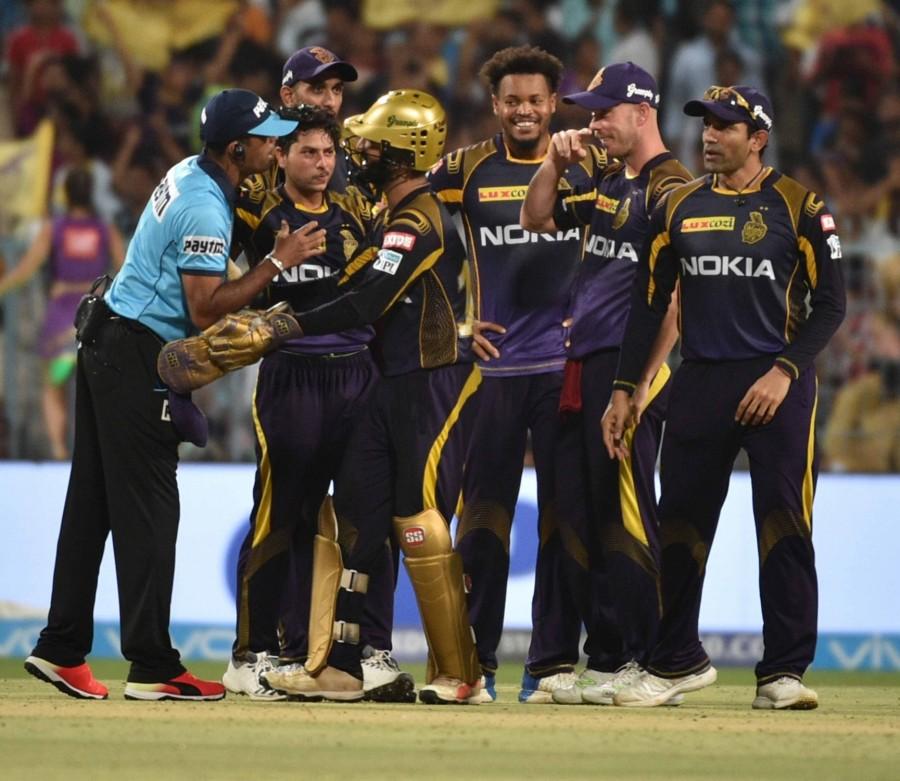 Tripathi fell to Russell in the West Indian's first over and the match's fifth, stitching together a 63-run opening wicket partnership off 29 deliveries. After six overs, Royals were 68/1 with 58 runs coming in boundaries (10 fours and three sixes). But once Kuldeep castled out-of-form visiting skipper Rahane, Royals could never recover. Credit: IANS
7 of 7 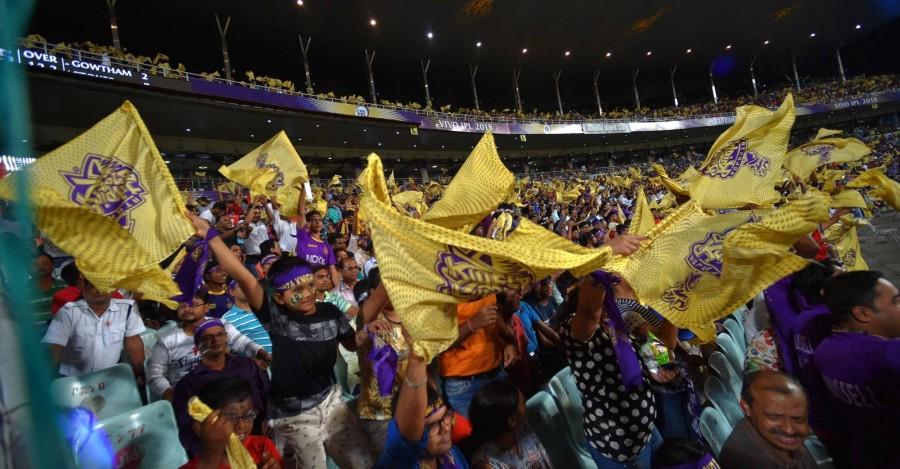