Mahendra Singh Dhoni (70 not out off 34 deliveries) and Ambati Rayudu's 53-ball 83 helped Chennai Super Kings (CSK) register a thumping five-wicket win over Royal Challengers Bangalore (RCB) here on Wednesday to return to the top spot of the Indian Premier League (IPL). Chasing a massive total of 206 runs, Dhoni was at his explosive best, blasting seven sixes as the visitors won with five wickets and two deliveries to spare clash at the M. Chinnaswamy Stadium. The veteran skipper was well supported by opener Rayudu, who slammed four boundaries and eight sixes as CSK took their points tally to 10, while RCB remained in the sixth spot with four points. Credit: IANS
2 of 7

Earlier, South Africans AB de Villiers and Quinton de Kock's struck breezy half centuries to power RCB to a mammoth 205/8. De Kock (53, 37 balls; 4x1, 6x4) played the perfect supporting role in the 103-run second wicket stand with de Villiers (68 off 30; 4x2, 6x8), who started from the word go to bring up his half century in just 23 deliveries. Put in to bat, RCB got off to a decent 35-run start by skipper Virat Kohli (18) and de Kock before Shardul Thakur saw the back of the Indian captain, thanks to a smart catch by Ravindra Jadeja. Credit: IANS
Advertisement1
3 of 7 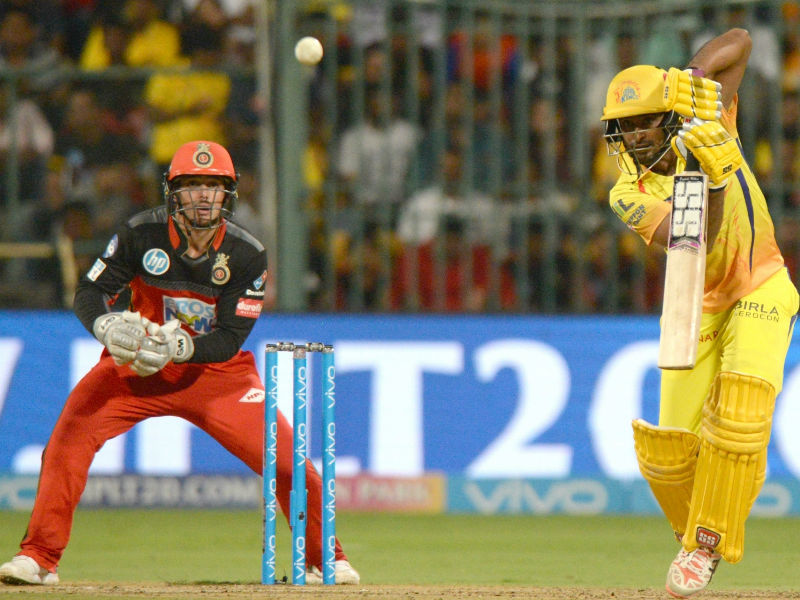 But the visitors wouldn't have imagined what was coming their way, as de Villiers started off by clobbering Harbhajan Singh for two consecutive sixes before launching left-arm spinner Jadeja to the skies. Such was the dominance from the former Proteas skipper that the hosts raced to 87/1 midway into the innings, with both de Villiers and de Kock nearing their respective fifties. Despite being overshadowed by his senior partner, the southpaw brought up his half century in style, tonking Shane Watson for a six over deep mid-wicket. Credit: IANS
4 of 7 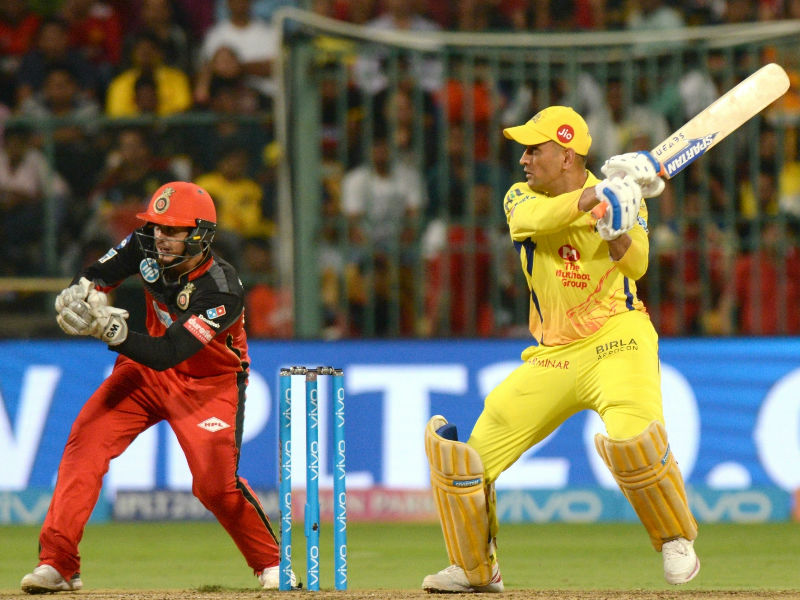 On the first ball of the very next over, de Villiers, who had earlier clobbered leg-spinner Imran Tahir for two massive sixes, took Thakur to the cleaners thrice consecutively to bring up his half century. With both the RCB batsmen going hammer and tongs, CSK skipper Dhoni threw the ball to his West Indian all-rounder Dwayne Bravo, and he responded in style by packing back de Kock with a smart catch off his own follow through. Tahir then joined the party by bagging the prized scalp of de Villiers and new man Corey Anderson (2) in the very next over to restore parity into the match. Credit: IANS
5 of 7 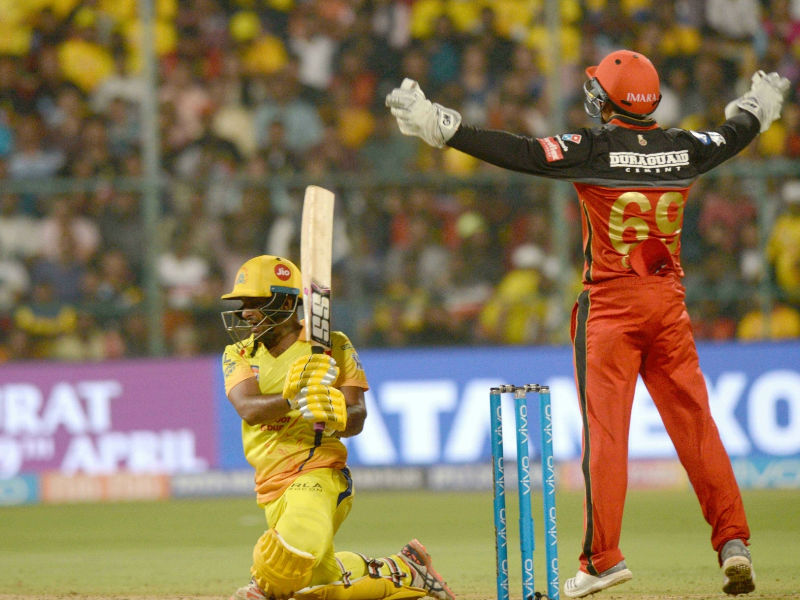 De Villiers miscued Tahir's tossed-up delivery pitched outside off-stump for Sam Billings to complete the formalities at deep cover. Tahir immediately got rid of New Zealand's Anderson with a googly as Harbhajan Singh completed a brilliant catch at slip. With the hosts comfortably placed at 142/4, Mandeep Singh (32 off 17; 4x1, 6x3) and Colin de Grandhomme (11) struck a few lusty blows towards the end, even as two run-outs and a wicket in the final over could not stop RCB from crossing the 200-run mark. During the chase, Chennai were off to a shaky start, losing opener Shane Watson (7), who was trying to clear the mid-on boundary, in the very first over. Incoming batter Suresh Raina then shared a 42-run partnership with Rayudu, helping CSK touch the 50-run mark. Credit: IANS
6 of 7 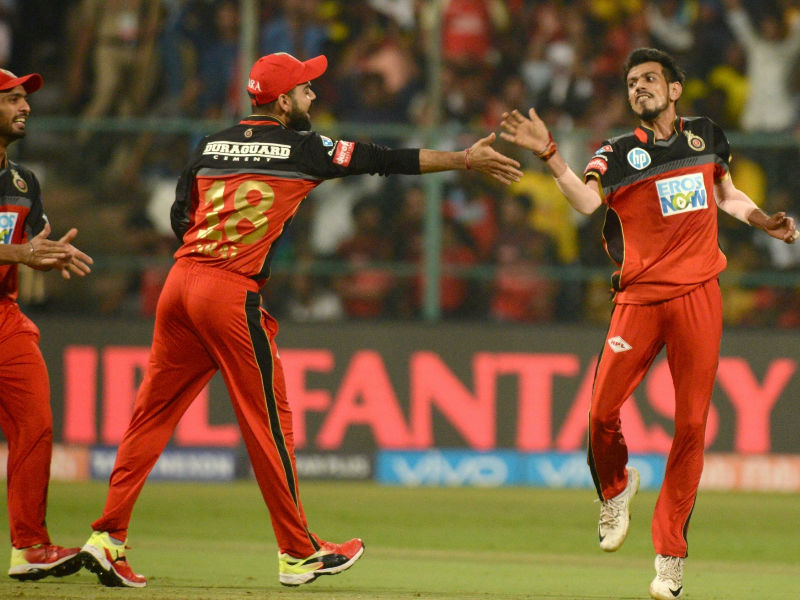 Rayudu however, kept the scoreboard ticking for CSK. The opener was then joined by Dhoni, who made his intentions clear after smashing a massive six over deep midwicket on the vey second ball he faced. The duo then shared a crucial 101-run partnership for the fifth wicket, bringing back CSK in the contest. Both the batters fired every RCB bowlers to skies and meanwhile, Rayudu bought his second fifty of the season in the 14th over. On the other hand, Dhoni too, notched up his second fifty in the 18th over with Chennai's scorecard reading 169/4. Credit: IANS
7 of 7 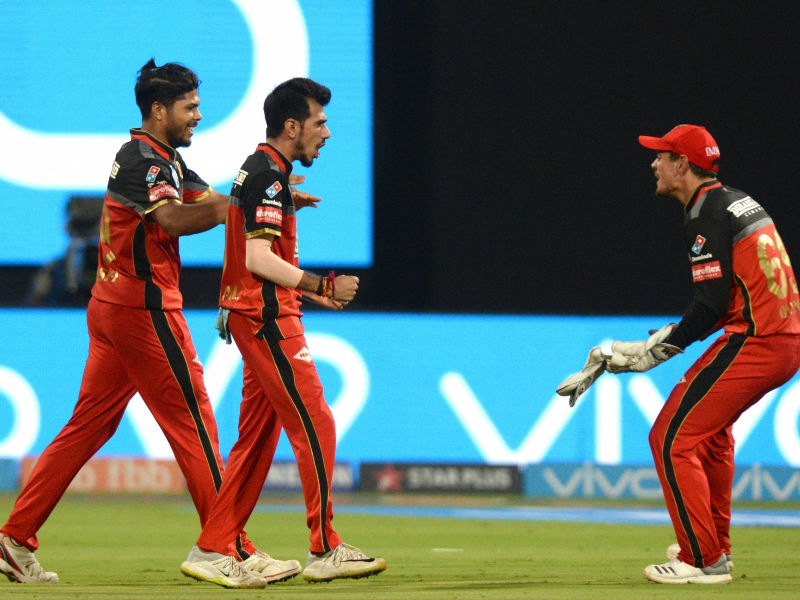