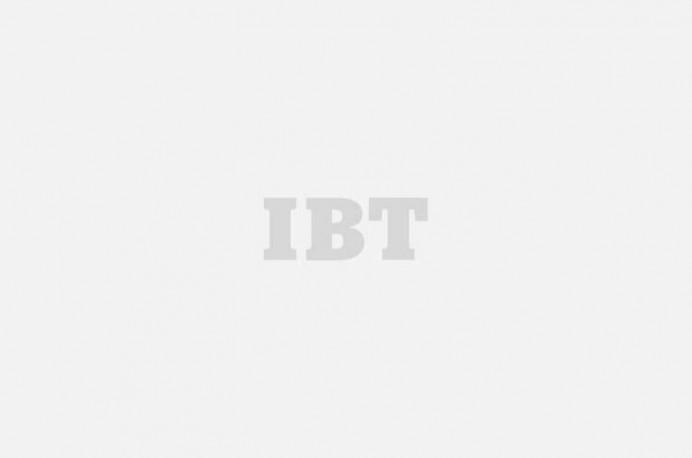 Kieran Pollards 70 runs in 47 deliveries helped Mumbai Indians withstand a fiery spell, including a hat-trick, from leg-spinner Samuel Badree as the visitors registered a four-wicket win over Royal Challengers Bangalore (RCB) to go top of the Indian Premier League (IPL) with six points here on Friday. In pursuit of RCB's 142/5, Mumbai had a horrendous start as Badree snared a hat-trick in the third over, removing Parthiv Patel (3), Mitchell McClanaghan (0) and Rohit Sharma (0) to plunge the visitors to 7/4, with opener Jos Buttler (2) already being dismissed by Stuart Binny in the second over. In the second ball of the West Indian leg-spinner Badree's second over, Parthiv offered a catch to Chris Gayle at short cover, while McClenaghan smashed a full toss into the hands of Mandeep Singh at long on. Facing the hat-trick ball, Mumbai captain Rohit Sharma couldn't tackle a googly which destroyed the stumps to mark Badree registering the 15th hat-trick in IPL history. Credit: IANS
2 of 5

Badree didn't stop there. He got the wicket of Nitish Rana (11) to cast a huge doubt over RCB's hopes of overhauling the relatively small target. Overall, Badree gave away only nine runs in four overs at the Chinnaswamy Stadium. But after the end of the brilliant spell from Badree, Mumbai's seasoned all-rounder Pollard (70 off 47) kept his side afloat with a defiant knock. He dug his team out of the abyss with a 93-run sixth-wicket partnership with Krunal Pandya (37 not out off 30). Pollard's inning was studded with three fours and five sixes -- three off left-arm spinner Pawan Negi -- as he turned the match on his own. The partnership began slowly, the first focus being on weathering the storm. But as the pair spent some time together at the crease, they became showing their might. Credit: IANS
Advertisement1
3 of 5 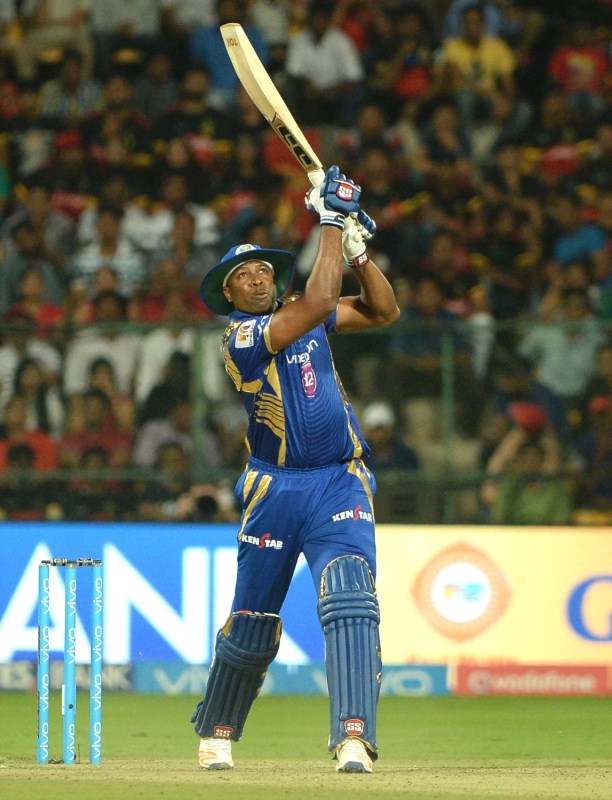 With 52 required off the final five overs, Pollard's two sixes over bowler Negi's head tilted the match in favour of Mumbai, who earned 19 runs from the over. In the following over, he deposited one into the stands off a ball from leg-spinner Yuzvender Chahal. However, the same over saw him being holed out by AB de Villers at the long-on boundary. But he had done the job, with Mumbai needing only 17 runs off 15 balls after Pollard's wicket. Later, Krunal and his brother Hardik saw their side home with four wickets and 1.1 overs to spare. Mumbai's chase was only possible as they had a small target to chase. They dished out a disciplined bowling show to restrict RCB to 142/5. Though Mumbai played without their experienced pacer Lasith Malinga, their other bowlers bowled to their potential as RCB wasted a solid start given by skipper Virat Kohli, Chris Gayle and de Villiers. The RCB thus got wrapped up under 150-run mark. Credit: IANS
4 of 5 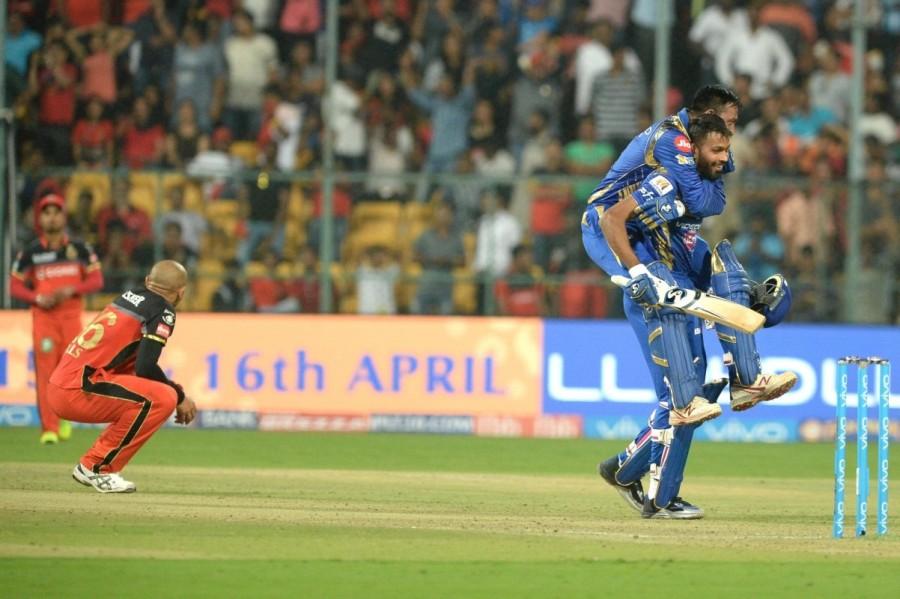 For Mumbai, McClenaghan scalped two wickets for 20 runs in four overs while Hardik Pandya and Krunal Pandya chipped in with one wicket each. Kohli, who was injured during the third Test match against Australia, made his comeback in style with a 62-run knock, which comprised of five fours and two sixes. The 28-year-old came out to bat with Gayle (22) and forged a 63-run partnership in 10 overs to give the RCB a perfect start. But when the duo started shifting gears, Gayle, who blasted one six and two boundaries, fell to medium-pacer Hardik Pandya. A head-height short bowl did the trick for Mumbai as Gayle was caught by wicketkeeper Parthiv when he tried to pull the ball. De Villiers (19) and Kohli then continued to punish the bowlers with some great show around the park. In the process, Kohli reached his fifty with a huge six. But soon, Kohli was dismissed by pacer Mitchell McClenaghan. The skipper had added 47 runs for the second wicket with de Villiers. Credit: IANS
5 of 5 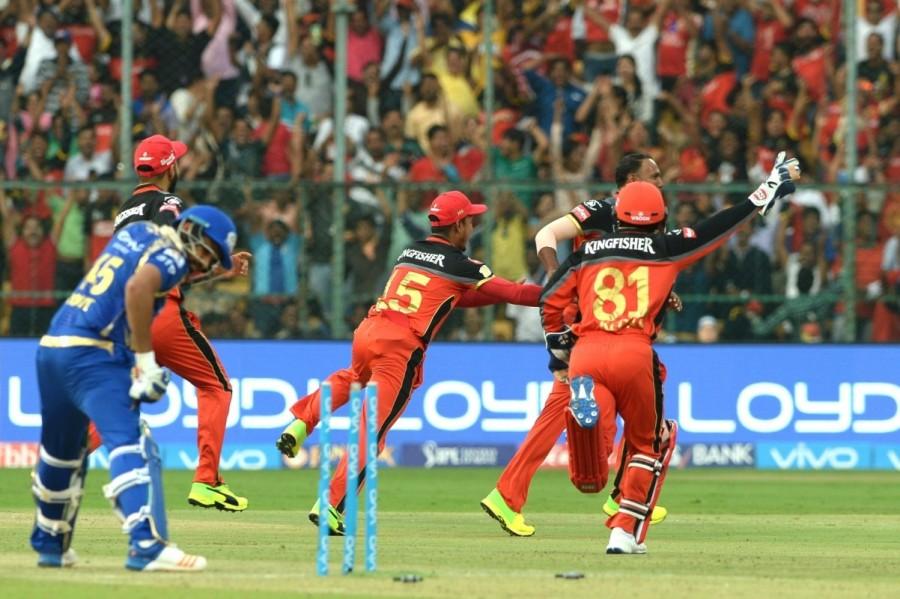 After five more runs with new batsman Kedar Jadhav (9), de Villiers too fell, sent packing by spinner Krunal Pandya in the 17th over. The middle-order once again failed as two crucial batsmen Kedar Jadhav and Mandeep Singh (0) were dismissed back to back, leaving Bangalore tottering at 127/5 in 18.1 overs. Pawan Negi, who has not proved his worth so far in the cash-rich league, once again did not rise to the occasion as he scored 13 runs in 13 balls. His partner Stuart Binny scored six runs as Bangalore failed get a boundary in the last 5.2 overs. Credit: IANS
Advertisement
Related Articles

Fact-check: No, Rohit Sharma's picture was not displayed on Burj Khalifa