India put up a strong all-round show to register their biggest Twenty20 International (T20I) win in terms of runs -- 93 -- in the first match against Sri Lanka at the Barabati Stadium here on Wednesday. Opener Lokesh Rahul (61) played sensibly at the top order before Mahendra Singh Dhoni (39 not out) and Manish Pandey (32 not out) finished off the proceedings in style to take India to 180/3. Credit: IANS
2 of 7

In reply, Sri Lanka were bowled out for 87 in 16 overs, thanks to leg-spinner Yuzvender Chahal (4/23). Put in to bat, India started off on a good note as openers Rohit Sharma (17) and Rahul added 38 runs in five overs before Rohit mistimed a short to mid-on off Angelo Mathews. In his 13-ball innings, the Mumbai batsman, who became the second Indian after Virat Kohli to complete 1,500 runs, managed to hit only two boundaries. Credit: IANS
Advertisement1
3 of 7 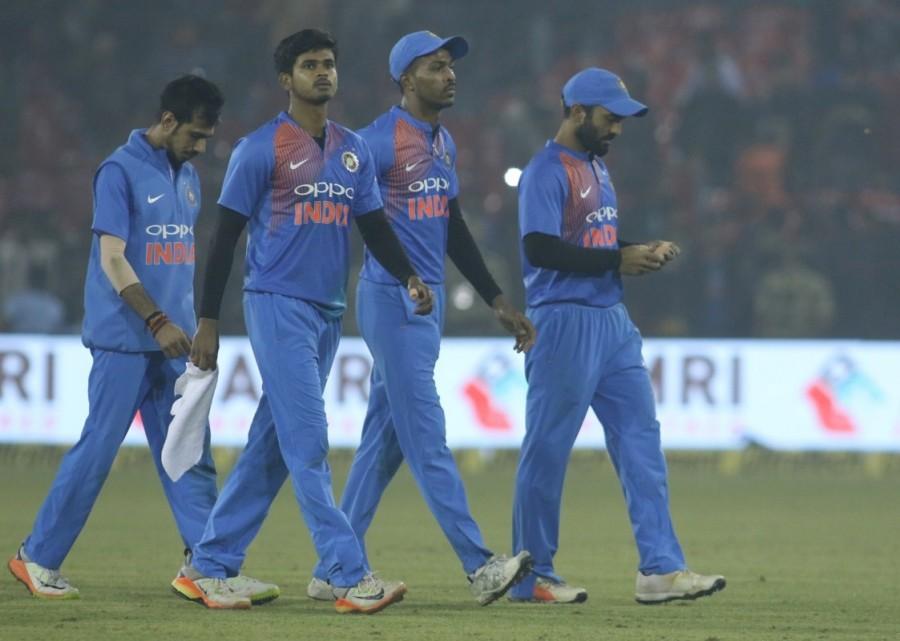 Incoming batsman Shreyas Iyer (24) then joined Rahul in the middle and the duo forged a 74-run partnership to help their team to cross 100-run mark without losing any wickets. Just when things seemed good in the middle, Iyer was dismissed by Nuwan Pradeep in the 13th over when the scoreboard was reading 112. Iyer played 20 balls and slammed three boundaries. After adding few more runs with new batsmen Dhoni, Rahul was also sent packing in the 15th over by Thisara Perera. While trying to hit the boundary, Rahul completely missed and ball went on to hit the stumps. His 48-ball innings comprised off seven boundaries and one six. Credit: IANS
4 of 7 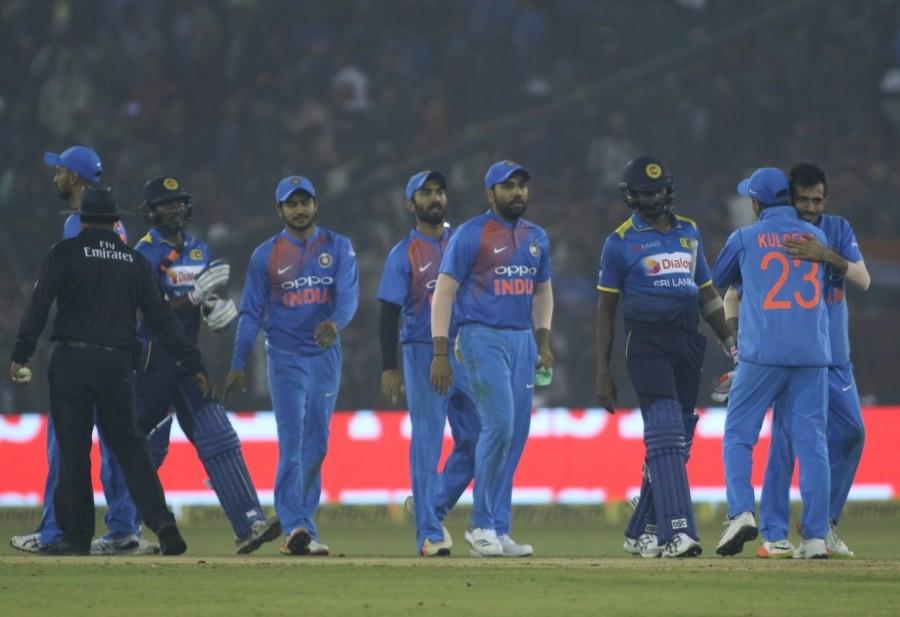 The fall of Rahul's wicket brought in Pandey. Pandey and Dhoni played sensibly and punished the bad balls. Soon, India crossed 150 run mark in the 19th over. The last few deliveries saw some power-hitting from both the batsmen especially from Pandey. Dhoni also displayed some shots and finally closed Indian innings with a six. For Sri Lanka, Mathews, Pradeep and Perera chipped in with one wicket each. During the chase, Sri Lanka couldn't get it going from the beginning. Neither the openers, nor the middle-order batsmen showed attributes of putting up a fight. Credit: IANS
5 of 7 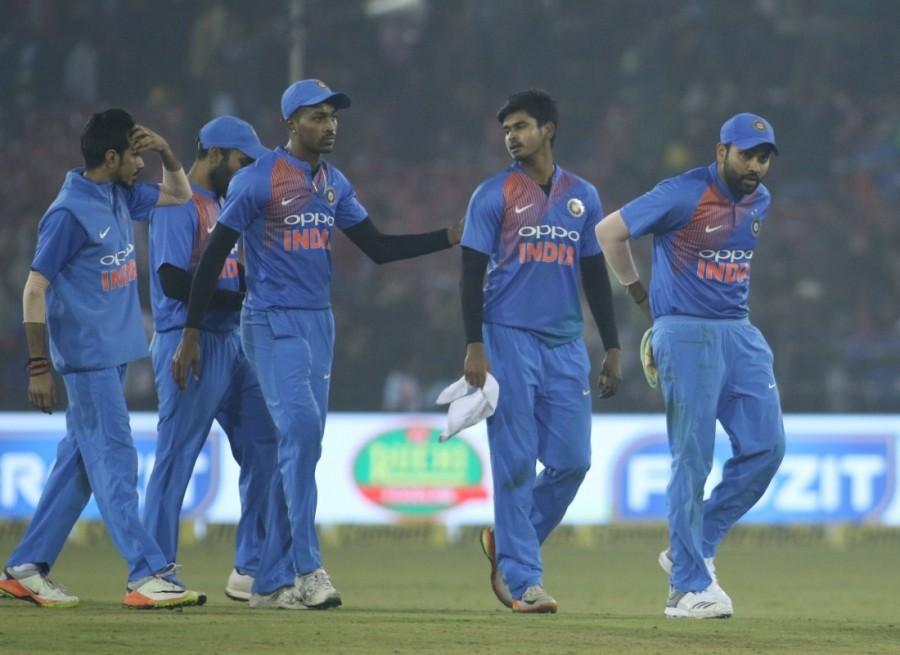 On a two-paced wicket, India bowlers dropped their pace and the batsmen struggled with their timings, especially against Chahal and Kuldeep Yadav. Niroshan Dickwella (13 off 8) opened of his stance and skied to Rahul at short cover as Sri Lanka lost their first wicket with only 15 runs on the board. Left-handed opener Upul Thranga (23 off 16) was looking good caught until he attempted slog-sweep a wide delivery from leg-spinner Chahal and Dhoni took a sharp catch. Sri Lanka further ran into trouble when experienced Mathews (1) gave a return catch to Chahal. Credit: IANS
6 of 7 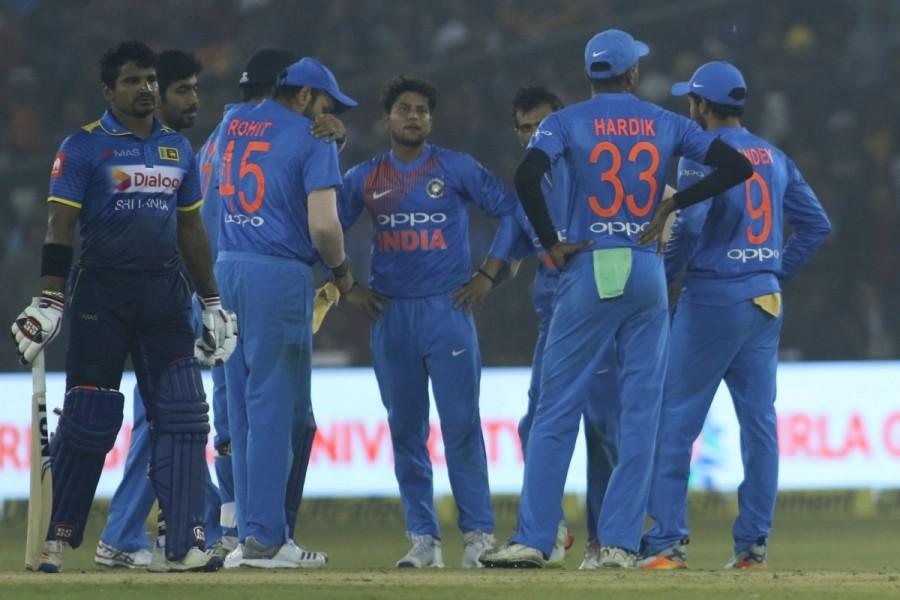 The Haryana tweaker bagged his third wicket when right-hander Asela Gunaratne (4) was stumped by Dhoni. The wickets kept falling -- the next one being Dasun Shanaka (1). The Sri Lankan batsman hit left-arm wrist spinner Kuldeep Yadav to the hands of Hardik Pandya at long-off, with the visitors at 58/5. Chahal continued his good show when he scalped his fourth, this time removing captain Perera (3) to dash the grim hopes of the visitors. Perera went up the track but was foxed by a googly and Dhoni dismantled the wickets. Credit: IANS
7 of 7 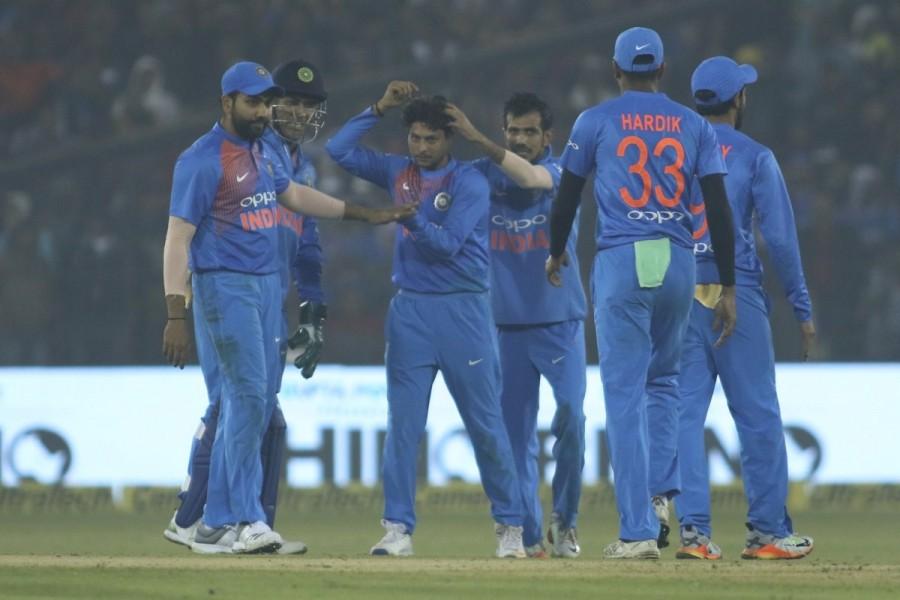