A good all-round performance helped India beat Sri Lanka by 88 runs in the second Twenty-20 International (T20I) match at the Holkar Cricket Stadium here on Friday. Skipper Rohit Sharma, who blasted a 35-ball century, piloted India to a mammoth 260, the joint-second highest T20I total. In reply Sri Lankan batsmen struggled and were dismissed at 172, losing the series 0-2. Credit: IANS
2 of 7

For India, spinners Yuzvendra Chahal 4/52) and Kuldeep Yadav (3/52) were the most successfull bowlers. Chasing 261, the visitors started off on a positive note as openers Niroshan Dickwella (25) Upul Tharanga (47) added 36 runs in 4.3 overs before Dickwella was dismissed by pacer Jaydev Unadkat. His 19-ball innings ended through a good catch by Hardik Pandya. Incoming batsman Kusal Perera (77) then joined Tharanga. The duo played sensibly and played the ball to its merit. They also punished the bad balls to forge a 109-run partnership for the second wicket. Credit: IANS
Advertisement1
3 of 7 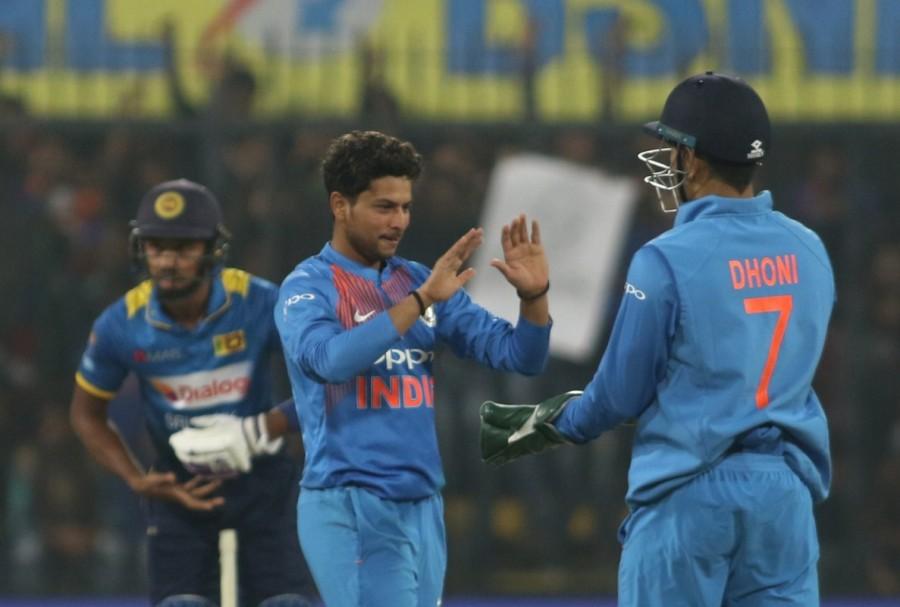 But just when things seemed good in the middle for the visitors, Tharanga top-edged the ball which was perfectly caught by spinner Yuzvendra Chahal in the 14th over. His 29-ball innings was laced with three boundaries and two sixes. With the scoreboard reading 145/2, skipper Thisara Perera (0) arrived in the middle and was sent packing in the very first ball of the next over. Pandya took a brilliant catch to dismiss the skipper off chinaman Kuldeep Yadav. The same over saw another wicket and this time it was Manish Pandey who took the catch. While trying to go for a big one, Kusal Perera failed to connect with the ball properly and gifted his wicket in the 15th over. His 37 ball innings was laced with four boundaries and seven sixes. Credit: IANS
4 of 7 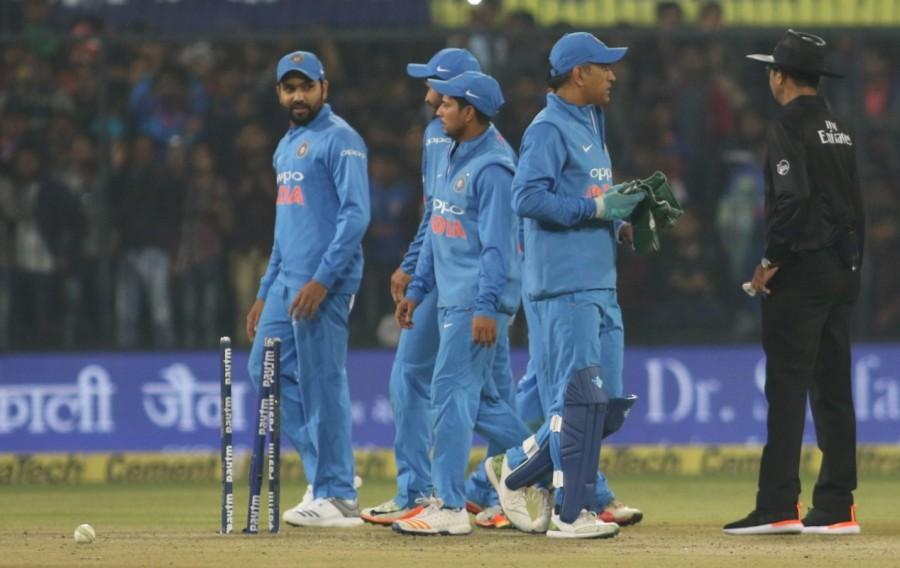 After that, it seemed like the Sri Lankan batsmen were in a hurry. Asela Gunaratne (0) departed on the first ball. Lower order batsmen Chaturanga de Silva (1), Sadeera Samarawickrama (5), Akila Dananjaya (5), Dushmantha Chameera (3), were also dismissed early and cheaply to clinch the issue. Earlier, put in to bat, skipper Rohit Sharma blasted a 35-ball century to power India to the joint-second highest T20I total of 260/5. Credit: IANS
5 of 7 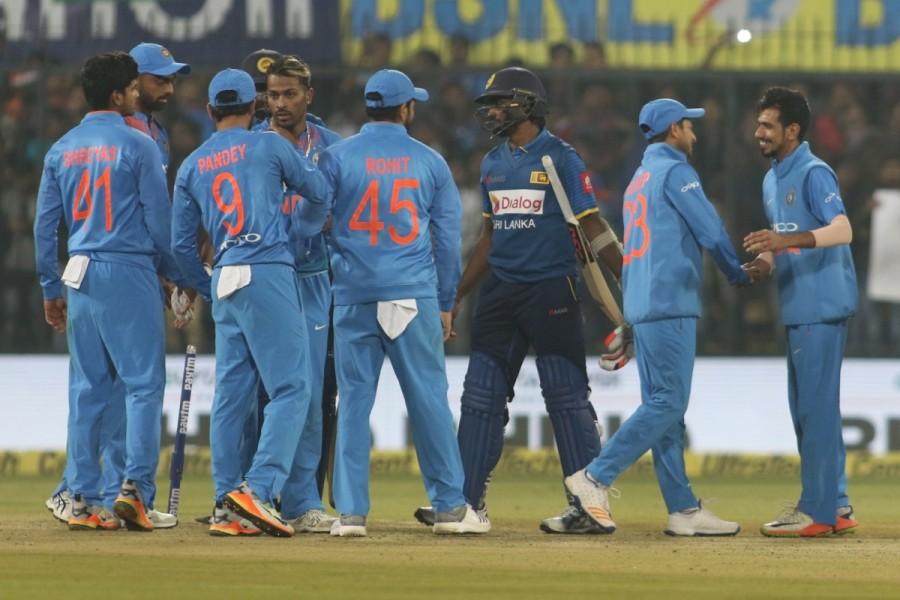 India rode on a record opening partnership of 165 runs, bettering the previous 158 runs between Lokesh Rahul and Shikhar Dhawan, as Rohit plundered the Sri Lankan bowlers to notch his second T20 ton (118 from 48 balls; 48x12, 6x10). From the onset, there was no stopping the Mumbai right-hander, who also equalled the fastest T20I century with South Africa's David Miller as India raced to 50 in the first five overs. While his opening partner Rahul (89 off 49; 4x5, 6x8) started the onslaught with a couple of boundaries, Rohit took over by pulling Nuwan Pradeep for a thunderous six over mid-wicket before taking Akila Dananjaya to the skies thrice to milk 16 runs off the off-spinner's first over. Credit: IANS
6 of 7 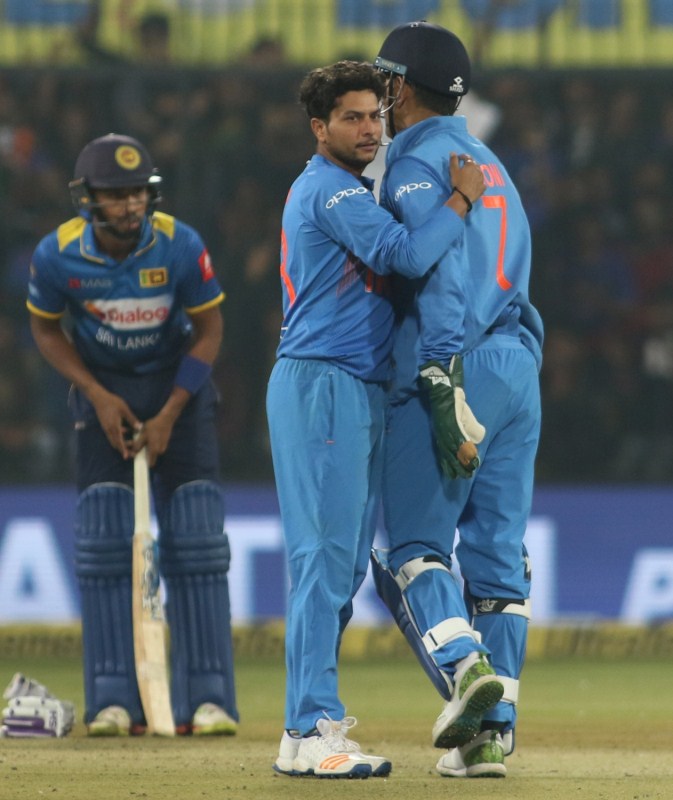 Rohit brought up his half century off just 23 deliveries, sending medium pacer Asela Gunaratne over deep mid-wicket for a maximum before swiftly moving on to 97 when he took his Sri Lankan counterpart Thisara Perera to the cleaners four times, thrice consecutively as the over yielded 26 runs. The Mumbaikar brought up his century in the next over, lacing a length ball through the covers for a boundary off Angelo Mathews before belting two sixes and a four off Dushmantha Chameera, who finally managed to bring the curtains down on Rohit's innings with a slower one. The fall of Rohit, brought in former India skipper Mahendra Singh Dhoni (28 off 20; 4x2, 6x2), who added 78 runs for the second wicket with Rahul. Credit: IANS
7 of 7 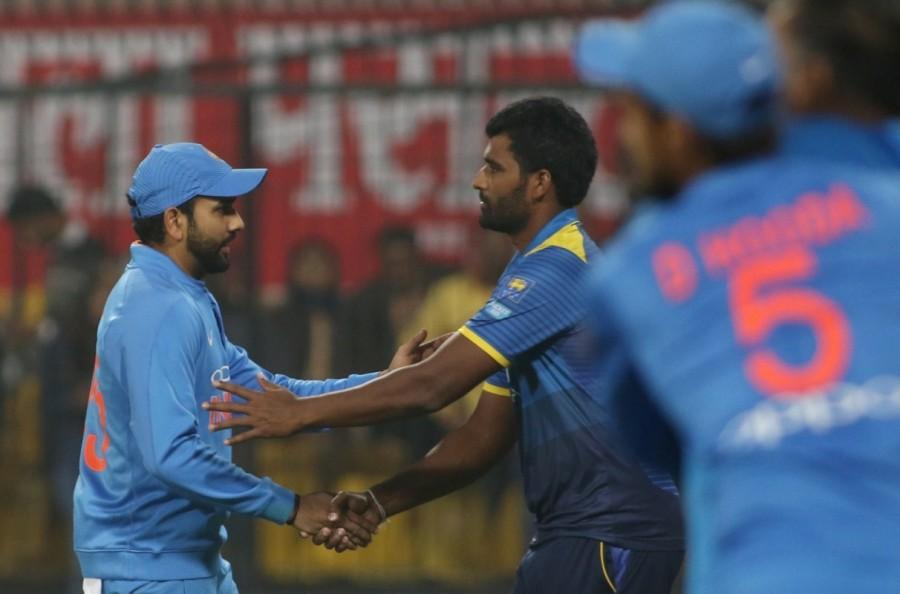 Shreyas Iyer (0) was the next man to be dismissed on the second ball of the final over before Perera got rid of Dhoni, one ball later. Dinesh Karthik (5 off 2; 4x1) struck a boundary off the second last ball even as Manish Pandey managed to open his account as India raced to the second highest T20 total. The visitors had another difficult day on the field with Perera and Pradeep picking two wickets each while Chameera took one towards the fag end of the Indian innings. Credit: IANS
Advertisement
Related Articles
Advertisement
Latest Gallery