Income Tax sleuths on Wednesday conducted searches at the residence of Karnataka Power Minister D.K. Shivakumar in the city and at a luxury suite he was staying in at a private resort here where 44 Gujarat Congress MLAs have been housed. "Our state investigative wing is conducting searches at the residence of a Karnataka Minister (Shivakumar) and the room he is staying at a resort (Eagleton) near Bengaluru where some MLAs from another state (Gujarat) are put up," said Income Tax Joint Commissioner S. Ramesh in a statement here. The searches were being conducted under Section 132 of the Income Tax Act as an evidence gathering exercise in compliance with the statutory requirements, he said. Credit: IANS
2 of 4

"The search is the continuation of an investigation, which has been in progress for a considerable period of time," asserted Ramesh. He maintained that the timing of the search was decided well in advance, and that it had nothing to do with Gujarat Congress MLAs being brought to Karnataka. "Our search team has no concern with the MLAs and there is no contact between the team and the MLAs. The minister's room alone was being searched," Ramesh said. The Congress has slammed the raids and termed it as political vendetta. Ahead of the searches, security was stepped up at the minister's residence and at the resort and vehicles coming out of the two places were checked. Credit: IANS
Advertisement1
3 of 4 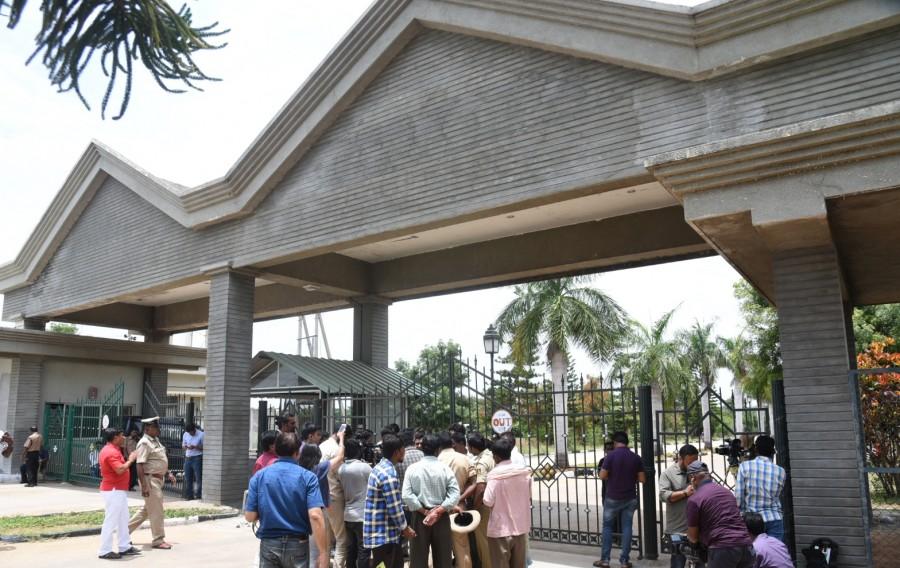 The IT sleuths brought Shivakumar to the city from the resort to question him on the documents and a huge haul of cash that was found in his residence. The search at the Minister's posh residence in the city's upscale northwest suburb and his deluxe room at the resort caught the ruling party in Karnataka unaware and led to condemnation. "It's a political vendetta by a desperate party (BJP) and its governments in the state (Gujarat) and in New Delhi to frighten the opposition members," party's state unit spokesman Dinesh Gundu Rao told reporters here. The Congress had flown its 44 Gujarat lawmakers from Ahmedabad on July 29 and lodged them in the Eagleton resort at Bidadi, 30km from here, ostensibly to prevent the BJP from poaching them ahead of the August 8 Rajya Sabha poll in which its senior leader Ahmed Patel is contesting for a fifth term from Gujarat. The resort is located in the Bengaluru Rural Lok Sabha constituency, represented by Congress lawmaker D.K. Suresh, younger brother of Shivakumar, a lawmaker from the Kanakapura assembly segment in the district. Credit: IANS
4 of 4 Patel, also political secretary to party President Sonia Gandhi, filed nomination in Ahmedabad on July 26. He needs 47 preference voters in the first round for re-election. It also has the support of two NCP lawmakers. The party's high command directed Shivakumar and Suresh to look after the needs of the Gujarat legislators, who are likely to stay at the resort till August 7 before flying back to Ahmedabad for the crucial voting on August 8. Ironically, the ruling BJP in Gujarat has fielded Balwantsinh Rajput, who quit the Congress as Chief Whip, to contest against Patel. BJP National President Amit Shah and Union Textiles and Information and Broadcasting Minister Smriti Irani are the two other candidates in the fray for four of the 11 Rajya Sabha seats from the state. Credit: IANS
Advertisement
Related Articles