Putting an end to its 20-year-long wait, France on Sunday won its second FIFA World Cup title after defeating Croatia 4-2 in a high-octane final at the Luzhniki Stadium here. In a tournament filled with dramatic ups and downs, France stood tall in the end, keeping cool at all times despite not being in its sublime form in the group stage. France took a lead in the 18th minute after Mario Mandzukic scored an own goal while heading away a free kick from Antoine Griezmann. However, Ivan Perisic's super strike soon found an equaliser for Croatia, after he received a super pass from centre back Domagoj Vida. Credit: (Photo by Matthias Hangst/Getty Images)
2 of 5

The high-voltage final later witnessed a major twist in the 38th minute, as the referee gave France a penalty after Perisic's arm was not in a natural position as the ball struck his hand. Griezmann converted the penalty into a goal after sending the Croatian goalkeeper the wrong way. Following that, midfielder Paul Pogba's top corner in the 59th minute and Kylian Mbappe's low strike in the 65th minute took the momentum away from Croatia and gave France a 4-1 lead. Credit: (Photo by Catherine Ivill/Getty Images)
Advertisement1
3 of 5 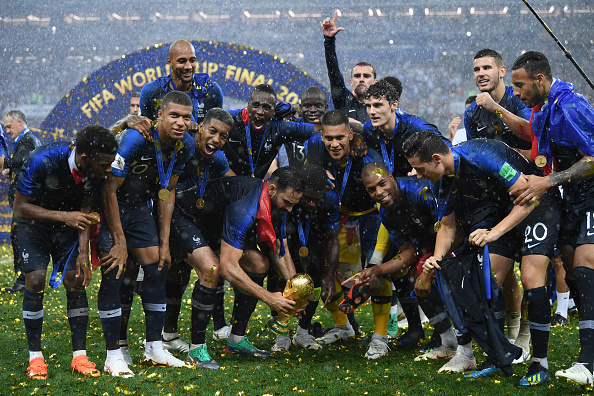 Mandzukic did manage to decrease Croatia's defect as he scored a goal in the 69th minute. Thereafter, Croatia started to panic as they couldn't manage to take the ball past French goalkeeper Lloris, with the match ultimately culminating in celebrations for the French side. Credit: (Photo by Matthias Hangst/Getty Images)
4 of 5 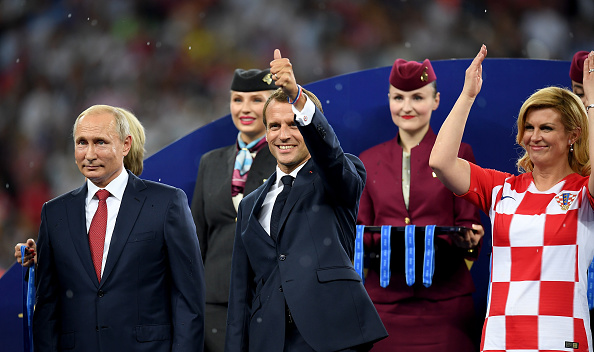 President of Russia Vladimir Putin, French President Emmanuel Macron and President of Croatia, Kolinda Grabar Kitarovic on the podium during the winner's ceremony after the 2018 FIFA World Cup Final between France and Croatia at Luzhniki Stadium on July 15, 2018 in Moscow, Russia. Credit: (Photo by Matthias Hangst/Getty Images)
Advertisement
Related Articles