Belgium topped Group G after beating England 1-0 here on Thursday in a clash between teams who had already qualified for the FIFA World Cup pre-quarterfinals. Adnan Januzaj's 51st minute strike proved to be the difference between the teams who were playing their third and final Group G game. With this win, Belgium took their points tally to nine, while England have six points as they finished top-two in this group to enter the second round. In the next round, Belgium will meet Japan, while England will take on Colombia. In Saransk, Tunisia defeated Panama 2-1 in the other game of the group to finish third with three points from three games. Tunisia and debutants Panama are eliminated from the tournament. Against Tunisia and Panama, both England and Belgium had brilliant records in the two rounds of group matches, which ensured them early tickets to the round of 16. Level on points, goal difference and goals scored, Thursday's game was decisive for the ranking.AA Both teams played a much changed starting XIs, with England resting eight of their players from the previous match and Belgium nine. England started the game with more possession, but it was Belgium who appeared more menacing. The sixth minute saw Belgium's first threat, when Youri Tielemans received a pass from the right and slammed at the net from about 23 meters away. Everton goalkeeper Jordan Pickford made an excellent save. Credit: (Photo by Ian MacNicol/Getty Images)
2 of 5

Four minutes later, Januzaj delivered a cross to Marouane Fellaini, who nodded on it. Pickford tried to save but the ball rolled through him towards the line. It was Chelsea defender Gary Cahill who managed a last-second clearance. Belgium gradually shifted the balance thereafter. Michy Batshuayi, the Borussia Dortmund forward who had a stoppage-time goal against Tunisia, caused chaos for England before the half-hour mark, which was later joined by Fellaini and Januzaj. It took some efforts from John Stones, Loftus-Cheek and Rashford to save the team amid scramble. Shortly after that Trent Alexander-Arnold won a free-kick. He found Loftus-Cheek, who flicked the header wide. The deadlock was broken six minutes into the second half, as Januzaj cut in from the right, passed over Tottenham Hotspur defender Danny Rose and thwacked a shot into the left corner of the net. England almost equalized 15 minutes later, with the dribbling Marcus Rashford facing Belgium's goalkeeper one-to-one. It was the best chance for England but the Manchester United striker had his shot right wide. Credit: (Photo by Ian MacNicol/Getty Images)
Advertisement1
3 of 5 They went close against 10 minutes before the full-time stroke with a free-kick 27 meters from the goal. Rashford aimed at the top-right corner but the ball flew over the bar. Then Ruben Loftus-Cheek blazed down the right, before curling the shot again over the bar. When it came to stoppage time, Belgium nearly doubled the lead. Substitute striker Dries Mertens lashed a dipping strike which was palmed out by Pickford. Credit: (Photo by Ian MacNicol/Getty Images)
4 of 5 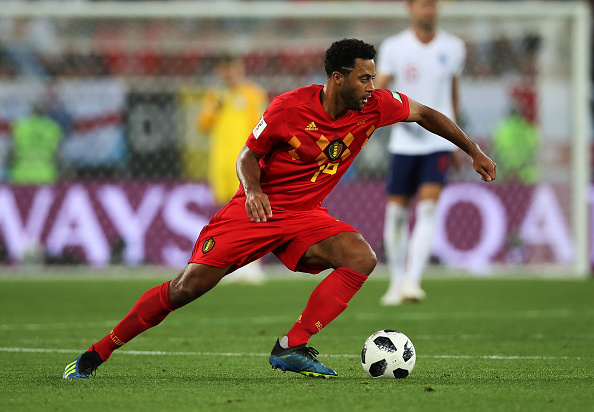 Mousa Dembele of Belgium is seen during the 2018 FIFA World Cup Russia group G match between England and Belgium at Kaliningrad Stadium on June 28, 2018 in Kaliningrad, Russia. Credit: (Photo by Ian MacNicol/Getty Images)
5 of 5