Fernandinho's own goal in the 13th minute and Kevin De Bruyne's 31st-minute strike meant Belgium led 2-0 at the half-time. Renato Augusto (76th minute) revived Brazil's hopes but it was too late as Belgium set up a semi-final with 1998 World Cup winners France, the only pre-tournament favourites to be in the last four. Roberto Martinez's Belgium orchestrated a counter-attacking game to near perfection as they caught Brazil, who were without their key defensive midfielder Casemiro, napping. Belgium, who were 0-2 down to Japan in their pre-quarterfinal before winning 3-2, went up 2-0 against Brazil, who were boosted by the return of Marcelo. Belgium replaced forward Dries Mertens with Nacer Chadli in order to make their more compact and instead they put attacking midfielder Kevin De Bruyne near the attackers, Eden Hazard and Romelu Lukaku. Brazil, playing with a 4-3-3 formation, had a promising start and could have taken the lead in th early seventh minute when a corner from the left saw the ball jump out of Thiago Silva's thigh and kissed the left post. Credit: (Photo by Koji Watanabe/Getty Images)
2 of 7

After the clearance, Belgium raced off for a counter-attack, with De Bruyne teeing up Hazard on the edge of the Brazil box. Hazard's shot was blocked by goalkeeper Alisson Becker. Chadli's rebound shot went wide of the left post. This action gave a sign of how Belgium were approaching the game. Another counter-attack led to a corner six minutes later. A corner, whipped by Belgium captain Hazard from the left flew into the Brazilian net off Fernandinho's right arm near the left post, catching Alisson out of position. Later, Philippe Coutinho and Marcelo tested Belgium goal-keeper Thibaut Courtois with long-range drives but the latter was alert, as Belgium, who played three central defenders in Jan Vertonghen, Vincent Kompany and Toby Alderweireld dealt Brazilian moves with patience and calmness. The European team doubled their lead in the 31st minute when Lukaku opened up a counter-attack following a corner. After Marouane Fellaini headed away Neymar's corner, Lukaku ran away down the middle of the pitch before rolling a pass right to De Bruyne, who launched a low screamer into the bottom left. Credit: (Photo by Koji Watanabe/Getty Images)
Advertisement1
3 of 7 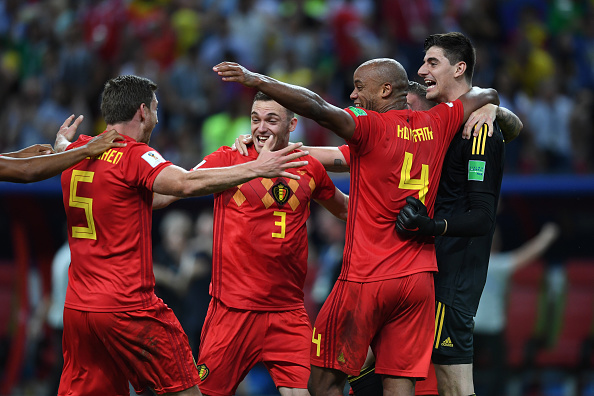 Brazil responded strongly after falling behind 0-2 and had their best chance of the first half six minutes later as Coutinho cut inside from the left, and sent a power curler towards the bottom right but it couldn't beat a diving Courtois. After the change of ends, Brazil removed off-colour Willian and Gabriel Gesus and brought in attacking players Douglas Costa and Roberto Firmino to infuse more energy. The strategy, coupled with Belgium's thinking of defending the lead meant that the European was forced to defend for the most part of the second half. Paulinho was not ready to stab home a rebound cross off Costa as Brazil continued their hunt for their opening goal. Belgium showed that they can also calmly defend and when they opportunity came, they were not behind in launching counter-attacks. They came close to their third goal when Chadli galloped down the left before feeding Hazard, who entered the left-hand side of the box before firing a low shot past the far post in the 63rd minute. Credit: (Photo by Etsuo Hara/Getty Images)
4 of 7 At the other end, 10 minutes later, a flick from right winger Costa was palmed away by Courtois but Neymar grabbed the rebound and employed a drive. But the keeper rose up to keep away the danger. Augusto then replaced Paulinho in the 73rd minute and three minute later he gave Brazil their opening goal. Coutinho, 30 yards out, down the inside-left channel, spotted Augusto with a looping cross and the substitute midfielder headed it past Courtois into the bottom right corner. Credit: (Photo by Chris Brunskill/Fantasista/Getty Images)
5 of 7 The Brazilian pair worked well a move four minutes later, when Coutinho slipped a pass down the middle of the box for Augusto, who sent a fierce low shot inches wide of the bottom left post. Belgium now were determined to defend the one-goal lead and put out Lukaku and Chadli and brought in defender Thomas Vermaelen and young midfielder Youri Tielesman to keep the pressing Brazilians' away. Credit: (Photo by Etsuo Hara/Getty Images)
6 of 7 Brazil continued with their momentum and later in the injury time, a Neymar curler to the top right corner was tipped over by Courtois as Belgium hung on to their 2-1 lead. Credit: (Photo by Koji Watanabe/Getty Images)
7 of 7 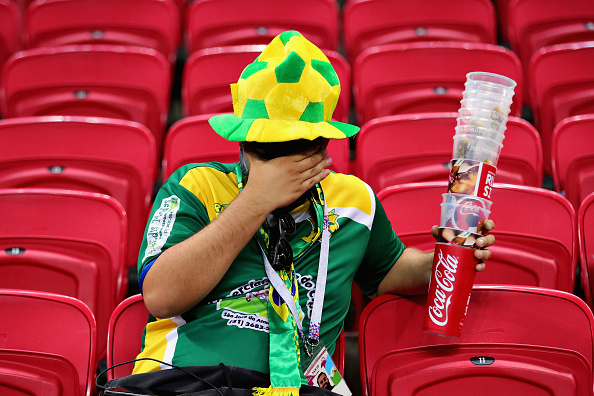 With Brazil's defeat, the semi-finals will not feature a South American nation after a gap of 12 years as Saturday's quarter-finals match-ups are England vs Sweden and Croatia vs hosts Russia. Credit: (Photo by Chris Brunskill/Fantasista/Getty Images)
Advertisement
Related Articles

What Indians Googled in 2022: IPL, Brahmastra, KGF 2 Top The List

"This is so disrespectful": Nora Fatehi faces flak for holding Indian National flag upside down at FIFA fanfest