Chinaman Kuldeep Yadav bagged a hat-trick as India rode a dominant bowling performance to restrict Australia to 202 and win the second One Day International (ODI) by 50 runs at the Eden Gardens here on Thursday. In three successive deliveries, Kuldeep (3/54) took the wickets of Mathew Wade, Ashton Agar and Pat Cummins in the 33rd over to become the second bowler in limited overs cricket to script a hat-trick at this venue and only the third Indian to record the rare feat in 50 overs cricket. The other Indians to get hat-tricks are Kapil Dev and Chetan Sharma, with Dev grabbing his treble at the Eden against Sri Lanka in 1991. Sharma bagged it in 1987. Besides Kuldeep, Bhuvneshwar Kumar (3/9), Yuzvendra Chahal (2/34) and all-rounder Hardik Pandya (2/56) starred with the ball for the hosts as Steve Smith (59) and Marcus Stoinis (62 not out) scored half-centuries for the tourists. Credit: IANS
2 of 5

The Aussies were jolted early on courtesy a fiery first spell by Bhuvneshwar (6-2-9-2). The 27-year-old first got rid of opener Hliton Cartwright (1), beating his inside edge with the ball crashing onto his stumps and then sent David Warner (1) back with a beauty. The ball swung away after pitching with Warner sticking his bat out for Rahane to pouch the ball at second slip. Skipper Smith and Travis Head then joined hands for a 76-run stand for the third wicket where the latter was dropped on 15 by Rohit Sharma at first slip in the seventh over. Just as the partnership was looking good, Head (39) was dismissed by Chahal and Glenn Maxwell (14) did not last long despite smacking Kuldeep for two back-to-back sixes. Dhoni effected a brilliant stumping off Chahal to get the wicket of Maxwell. Credit: IANS
Advertisement1
3 of 5 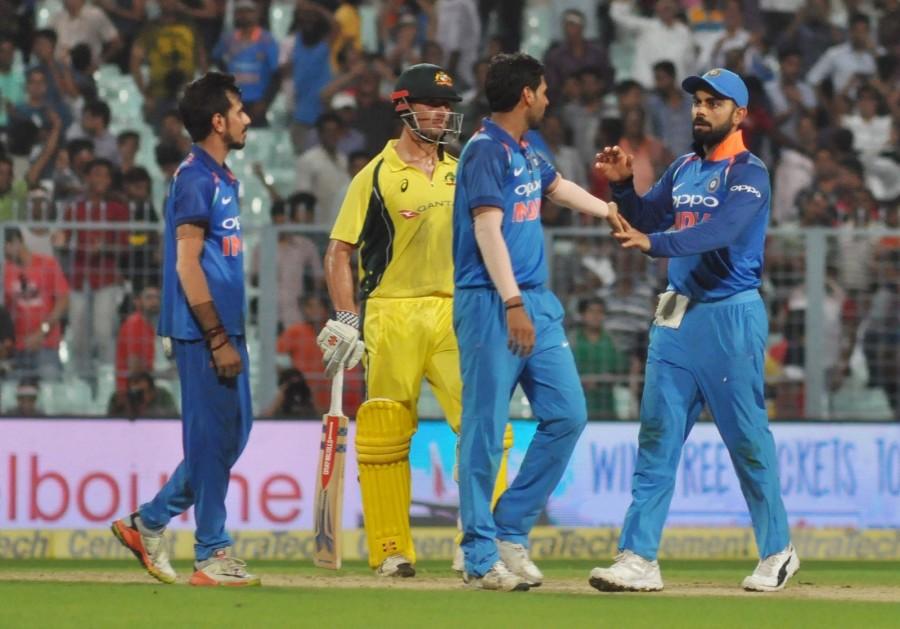 At 106/4, Smith was running out of partners and eventually departed after notching up his 17th fifty in his 100th ODI. Pandya took his wicket with substitute Ravindra Jadeja taking the catch running in from deep square leg. The show then belonged to Kuldeep who first drew Wade to chop the ball onto his stumps followed by Agar who was trapped in front. The Kanpur lad then celebrated like never before in the next delivery with Dhoni taking the catch of Cummins behind the wicket. Pandya and Bhuvneshwar shaved off the tail then, taking the wickets of Kane Richardson (0) and Nathan Coulter-Nile (8) to script India's eighth win on the bounce. Earlier, skipper Kohli played a fabulous knock but fell eight short of a well deserved century as India put up a challenging score of 252 after calling the toss correctly. Credit: IANS
4 of 5 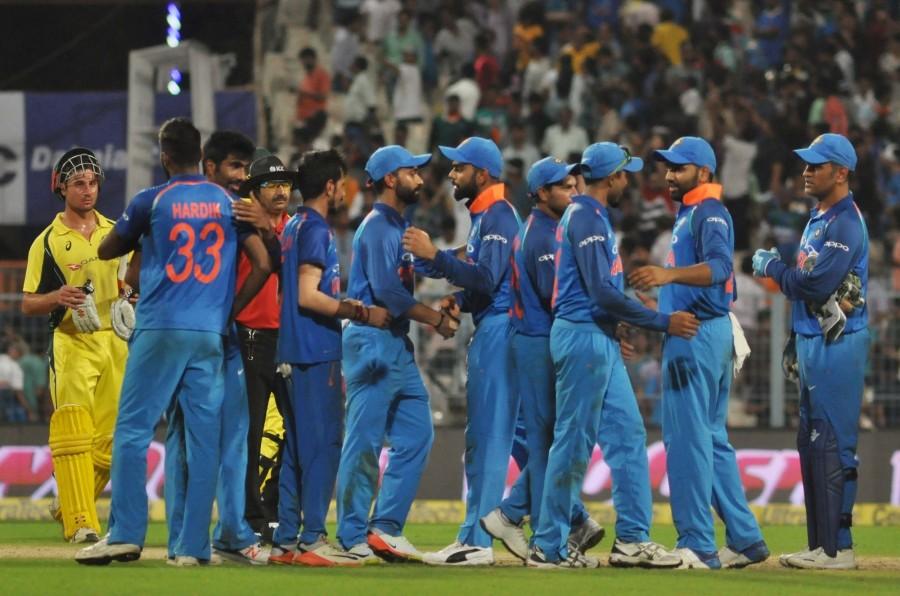 Kohli (92 from 107 balls; 8*4) built the Indian innings by stitching together a 102-run second wicket partnership with Ajinkya Rahane (55 from 64; 7*4) and later a 55-run stand for the fourth wicket in the company of Kedar Jadhav. After Kohli won the toss and opted to bat, pacer Coulter-Nile saw the end of Rohit (7) in the sixth over. This brought Rahane and Kohli together, and the duo went about their job of consolidating the Indian innings. The association was broken once Rahane got out. At the halfway stage of the innings, India were 124/2. But that became 131/3 a little later, with Manish Pandey (3) departing cheaply. Credit: IANS
5 of 5 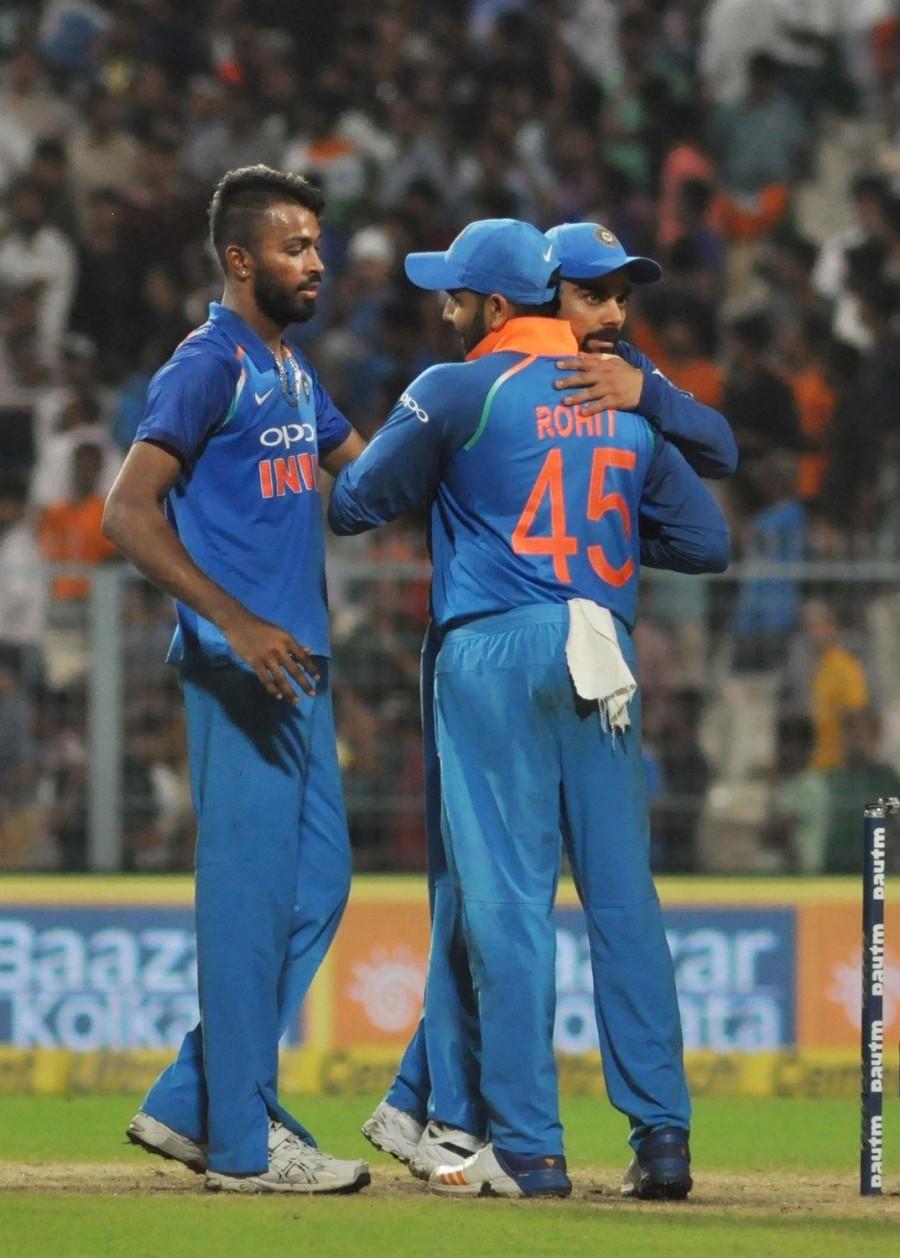 Jadhav (24 from 24; 2*4, 1*6) went for his shots but fell to Coulter-Nile, who dealt another blow with the wicket of Kohli and India pegged back at 197/5. Eight balls later, the in-form Dhoni (5) followed suit. Hardik and Bhuvneshwar each got 20 runs to stretch the innings towards the end. Coulter-Nile (3/51) and Richardson (3/55) were the most successful Australian bowlers. Credit: IANS
Advertisement
Related Articles
Advertisement
Latest Gallery