100% is the requirement of marks for each of the three courses under the first list and if seats are vacant then the required marks can be lowered in the second list.

Delhi University on Saturday announced the cut-off for 2020 admissions at a dozen of its colleges, with the cut-off percentage touching 100% at certain colleges. Lady Sri Ram (LSR) College for Women, for instance, is offering admission to BA (H) Economics, BA (H) Political Science, and BA (H) Psychology programmes to students who have got 100% as their best of four subjects score.

100% is the requirement of marks for each of the three courses under the first list and if seats are vacant then the required marks can be lowered in the second list. Meanwhile, Kirori Mal College set the cut off at 99% for admission to BA (Hons) in Political Science.

The high cut-off has not only left students worried but also started a meme-fest on Twitter. Check out some hilarious reactions below: 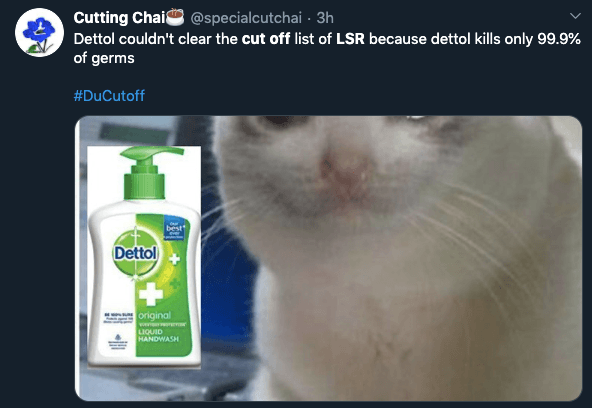 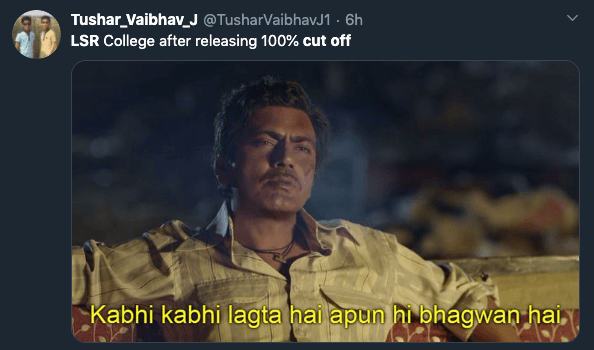 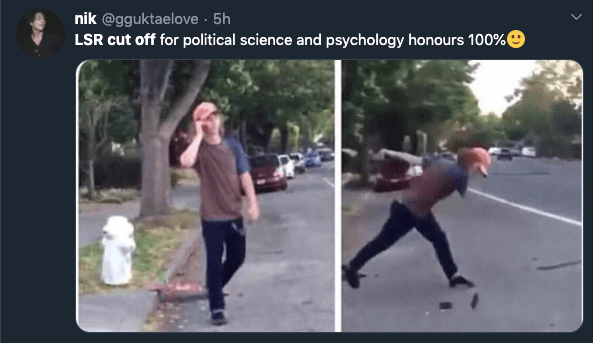 Cut off for other subjects and reactions

At Hindu College, the cut-off marks for admission to BA (H) Economics is 99.25%.

On the other hand, the cut-off for evening colleges as well as lesser-known off-campus colleges has gone higher than last year. BA (H) Economics, Political science are among the top courses this year.

While the unrealistic high cut-off has ensued panic among students and their parents, the Delhi University Students Union (DUSU) has stated that every student will get opportunity despite the high cut off.

"Delhi University has always been very particular about its cut-off. However, in these difficult times of the pandemic, we completely understand that students all over the country are in a state of panic. I assure you that the University is entirely considerate about every child's future and admission process. The university has an instilled admission trend with a display of high cut-offs going up to 97% and above in the first cut off. Even if so, only 10% of the seats are fulfilled by this cut-off, leaving a 90% room for the cut-offs released later which generally prove to be less and convenient. With the coming of the second cut-off itself, students will be made at ease with a slight fall in the percentage which will gradually allow more students to be eligible," said Akshit Dahiya, president, DUSU.

"I request students and their parents not to panic and to believe in the administration of the University. The welfare of every deserving student is a definite priority to the Delhi University," he appealed.

Meanwhile, the Students' Federation of India showed its concern about the trend of high cutoffs in DU. Sumit Kataria, Delhi-state president of the student body stated that the colleges purportedly release high cut-offs to maintain their "high track record" leading to peer pressure among students.

"It has been a trend by varsity's colleges to give priority to the creamy layer of students. It creates unnecessary psychological pressure over students. Those who don't make to the cut-off list, feel dejected and also feel less worthy of themselves. However, the percentage does not reflect the true intelligence of students," said Kataria

"We need to set straight the mechanism of admissions where each student gets a fair chance to explore one of the premier educational institutes the country offers. A holistic approach must be adopted in the admission processes," he added.

DU officials had earlier said that Delhi University admission cut-off marks will increase this year as many CBSE students have scored more than 95% in their Class 12 board exams.

This year, a record-high number of applications have been received. A total of 3,54,003 students have applied for the 64000 undergraduate seats. The number is 1.5 lakh higher than last year. Academics are claiming it to be an indicator of higher cut-offs.

The cut-off for DU is decided by calculating the best of four subjects marks scored in class 12 board exams. This year, 1,57,934 students scored over 90 per cent marks, while 38,686 got more than 95 per cent marks in CBSE class 12 results. According to the data, most of the applications for DU come from CBSE. Several other boards too declared result based on the average of highest marks and hence, got more 90% scorers.