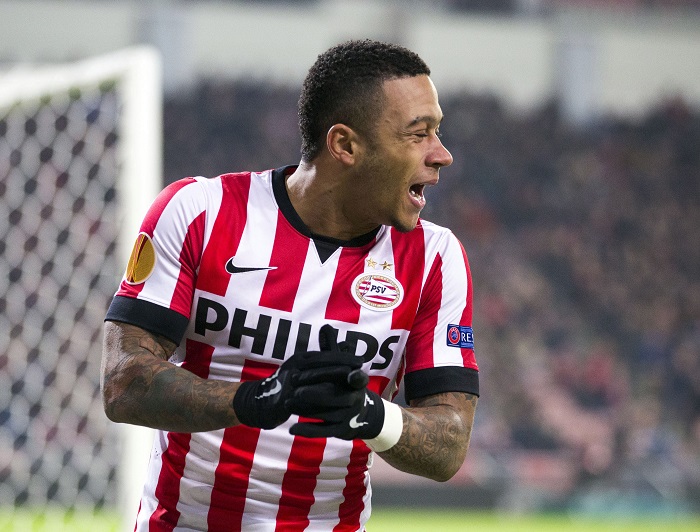 The Reds have been pretty disappointing this season and manager Brendan Rodgers reportedly feels that he needs to revamp his squad this summer in order to improve their chances of competing for silverware in 2015/16.

After the departure of Luis Suarez for a whopping £75 million to Barcelona last summer, the Reds reinvested on several new players in an attempt to strengthen their squad.

But most of these players, especially the strikers – Mario Balotelli and Rickie Lambert – have proved to be flops, and this has resulted in Liverpool enduring a disappointing season.

So Rodgers is reportedly looking to bring in better players to Anfield this summer so that his side is able to compete with the likes of Chelsea, Manchester United, Manchester City and Arsenal for silverware next season.

According to the Metro, the Northern Irishman is considering a triple swoop for PSV forward Depay, Aston Villa striker Benteke and Barcelona midfielder Song (currently on loan at West Ham) for a combined total of £65 milllion this summer.

Manchester United were believed to be leading the race to sign Depay, even as reports suggest the 21-year-old was flying to England to hold talks with the Red Devils.

However, the Dutchman recently rubbished all the speculations, insisting that he has not made any contact with the Red Devils.

Now Liverpool are reportedly in pole position to sign Depay, with Rodgers believed to be readying a £25 million bid for the Dutchman, who has been leading the scoring charts in Eredivisie this season.

The Reds are reportedly planning to offer Lambert along with £30 million in a player-plus-cash deal for Aston Villa's Benteke.

The Belgian, despite not being very impressive in the first half of the season, has been doing well of late ever since Tim Sherwood took over the reins at Villa Park.

Although Villa are unlikely to be interested in selling the Belgian, Liverpool are confident that they can land him making a £30 million bid and including Lambert, who the Villans had tried to sign in January, in the deal.

Finally, the Reds are reportedly interested in Barcelona's Alex Song, who is currently on loan at West Ham.

The former Arsenal midfielder reportedly wants to stay in England and it is believed that a £10 million transfer fee could be enough to tempt Barcelona to part with the Cameroonian.